20th Century Fox’s X-Men movie series has already had a try at the classic ‘Dark Phoenix Saga’ and the result was the infamous trash-fire X-Men: The Last Stand.

But thanks to some timey-wimey trickery, they’re getting a second bite of that cherry. Here’s everything you need to know about the X-Men: Apocalypse sequel about an angry flaming bird that blows up planets.

The first trailer arrive in September 2018, revealing what looks to be a very dark chapter in X-Men history.

Charles Xavier (James McAvoy) has been meddling in the mind of his student, Jean Grey (Sophie Turner), and those chickens are coming home to roost with the powerful young mutant tapping into the awesome power of the Phoenix.

Magneto is back to his old meddling ways, enabling Jean’s destructive behaviour… which might lead to a funeral for one of our heroes.

Unlike the announcement-happy Disney and Warner Bros, Fox kept quiet on its X-Men/Marvel plans until recently. But now there is only one movie on the table for 2018 (there were three before The New Mutants was previously pushed back ten months).

Dark Phoenix – the fourth in the “next generation” series following First Class, Days of Future Past and Apocalypse – was originally tipped to arrive on November 2, 2018. It was then pushed back in a major 20th Century Fox release date reshuffle to February 5, 2019 in the UK and February 14, 2019 in the US.

That delay allowed for a reported three months of extensive reshoots to rework the ending of the movie. Given that the trailer was released, we thought that was it, but it turned out that there was another delay on the horizon.

Now, the movie will hit cinemas on June 7, 2019 with director Simon Kinberg saying that it was down to the fact that the visual effects weren’t going to be ready in time.

“The Gambit date opened up because it wasn’t gonna be ready for that June 7th date. We looked at that date versus the February 14th date, the studio did and we did, we felt like that June date was a bigger opportunity for us globally,” he explained.

“More screens, more IMAX screens, a better chance to play in China where these movies have a massive following. What we found when we released the trailer was that 44, 45 million views of the trailer were in China alone… Specific for us, it is an opportunity to be a bigger movie day-and-date globally.”

Rumours that the core cast would be back have been confirmed, with James McAvoy, Michael Fassbender and even Jennifer Lawrence (who didn’t seem particularly into X-Men: Apocalypse but chose to come back to complete her character’s story) reprising their roles as Charles Xavier, Magneto and Mystique.

Nicholas Hoult (Beast), Alexandra Shipp (Storm), Tye Sheridan (Cyclops) and Kodi Smit-McPhee (Nightcrawler) are all returning, as well as Game of Thrones‘ Sophie Turner as Jean Grey, around whom the whole story will revolve. The Originals‘ Summer Fontana will apparently play a younger version of Jean.

Jessica Chastain has been cast, too. She has shot down rumours that she is playing the alien Shi’ar empress, Lilandra Neramani, who has been billed as a villain in the film. 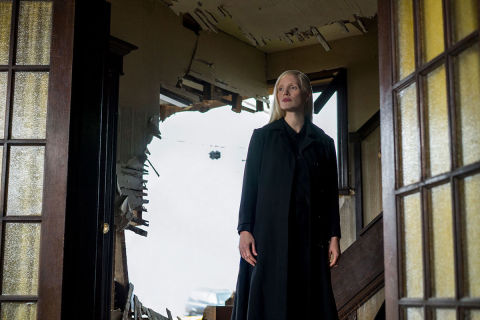 The latest reports bill her as an “otherworldly shapeshifter” called ‘Smith’, which sounds like a pseudonym if ever there was one. Whoever she is, she’ll be getting an intense showdown with Turner if pictures from the set are anything to go by.

And Evan Peters was finally confirmed to be returning for another scene-stealing turn as Quicksilver. The Next Step‘s Lamar Johnson is also on board in a mystery role, and Olivia Munn is back as Psylocke.

Original Colossus actor Daniel Cudmore is also returning, but now that Stefan Kapičić is playing that character in the Deadpool movies, we’re not sure who he’ll portray.

A rumour has also been going around that Rogue is being recast for the film, and Dazzler is also expected to make an appearance.

Long-time X-Men producer and writer Simon Kinberg has been confirmed to make his directorial debut, stepping in to replace Bryan Singer. Kinberg has been working on the franchise since 2006’s The Last Stand, but we try not to hold that against him.

The hints regarding Dark Phoenix began just before the release of X-Men: Apocalypse in 2016. Bryan Singer said he was down for it, hinting that something “dark” and “powerful” was growing in Jean Grey.

But what is The Dark Phoenix Saga anyway? In a nutshell:

When escaping from an exploding space station, Jean sacrificed herself by piloting the X-Men’s ship back to Earth and exposing herself to dangerous levels of radiation. Before she died, a mysterious cosmic entity called the Phoenix offered her the power to save her friends and herself. 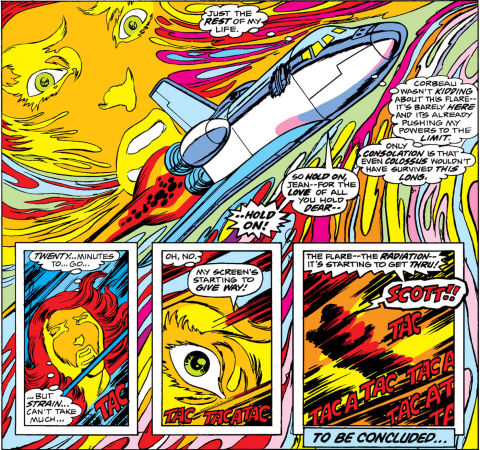 She accepted the Phoenix into herself (this was later changed so that a copy of her was made and she was put in stasis and hidden, but this doesn’t matter for our purposes and is usually ignored by everyone). With her new powers, she helped the alien Shi’ar princess Lilandra topple her corrupt brother, the emperor D’Ken, and saved a magical space crystal.

But back on Earth, a group of powerful mutants called the Hellfire Club started secretly manipulating Jean’s mind. They tapped into her dark side, but unfortunately weren’t able to control what they found there. 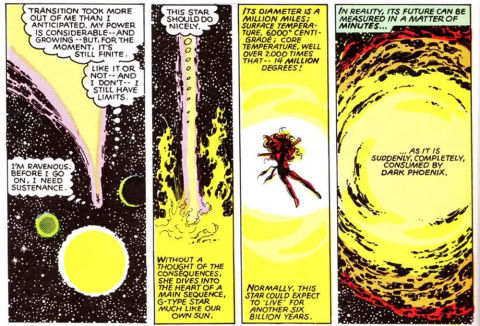 The Dark Phoenix flew around space and blew up some inhabited planets. Jean was able to resume control, but only just in time for the Shi’ar to show up.

They weren’t too pleased about the exploding planets bit, and fought the X-Men for the right to execute the Phoenix. Jean decided she was too much of a risk to her friends, and sacrificed herself. 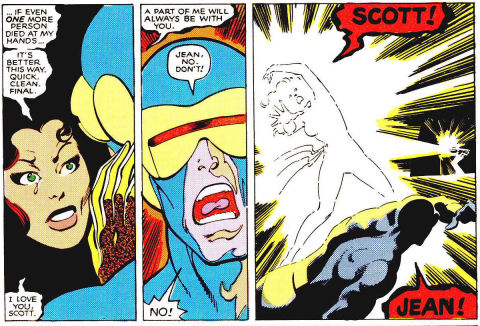 The Last Stand steered clear of all that cosmic stuff. The Phoenix was instead revealed as a suppressed personality in Jean’s mind that had a thing for evil Willow styling and murdering her loved ones.

Olivia Munn has called the movie a “two-parter”, but we have no idea what she means by that.

The rumours around Dark Phoenix indicate that it might stick much closer to the original story. Early reports said that the X-Men would be going into space, and there are rumours that the Shi’ar are involved, although the first trailer suggests that Dark Phoenix will retain some of the plot points from The Last Stand, with Xavier having meddled with Jean’s mind (again) when she was a child.

Whatever the case, Evan Peters has promised a “darker” tone than Apocalypse, which would certainly fit with the bleak original.

The film will reportedly be set in the ’90s, following the pattern of the recent films being set ten years apart (First Class in the ’60s, Days of Future Past in the ’70s and Apocalypse in the ’80s). Though don’t expect the film to explain why no one seems to be ageing at the appropriate rate between movies. Xavier and Magneto should be about 60 by now.

Next post House of Cards' Final Season Trailer Is Chilling