This child’s-eye view of a family’s flight from Nazi Germany keeps the perils of the adult world at a determined remove. 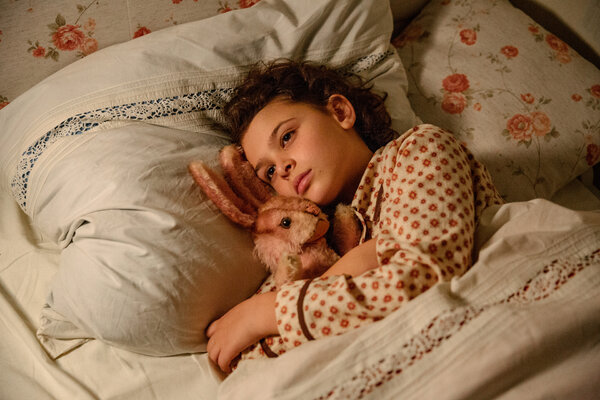 Painting a curiously cozy portrait of refugee life, Caroline Link’s “When Hitler Stole Pink Rabbit” views displacement and the approaching Holocaust primarily through the experiences of a child, Anna Kemper (a captivating Riva Krymalowski). The result is a movie that’s almost as cuddly as the toy in its title.

We meet 9-year-old Anna in Berlin in 1933, just before the Nazis come to power. Forced to flee to protect her father, Arthur (Oliver Masucci), a noted theater critic and prominent denouncer of Hitler, the family — including Anna’s older brother, Max (Marinus Hohmann), and their mother, Dorothea (Carla Juri) — relocate to the Swiss countryside. While the children grapple with a new language and unfamiliar customs, Arthur struggles to find work in a country he learns is experiencing an influx of Jewish intellectuals and is fearful of compromising its neutrality.

A move to a meager Paris apartment only accelerates their diminishing circumstances. Yet, considering the horrors unfolding in Germany, the family’s problems feel staggeringly trivial. News that the Nazis have looted their home and burned their books, and that Arthur now has a price on his head, seems to arrive from another planet as the film focuses on Anna’s developing artistic talent. It’s difficult to sympathize with a family whose most pressing problems are a snippy French landlady (Anne Bennent) and the ability to afford private schooling for only one child. Indeed, Dorothea’s disdain for public schools (“They don’t even teach Latin there”) expresses a privilege that feels shockingly out of place.

This soft-pedal, sentimental approach is clearly owed to Judith Kerr’s 1971 children’s novel, which Link and Anna Brüggemann have adapted without cracking much of a window onto the adult world. The family experiences some mild anti-Semitism, but the film carries no genuine sense of looming threat or the perils of their predicament. Much like Link’s 2003 feature, “Nowhere in Africa” — in which a wealthy Jewish family relocates to Kenya — the pace is lingering, the tone warm, the palette glossy and the mood determinedly optimistic. And as Anna moves from scribbling pictures of disasters to casting gloomy thoughts aside, the film strains to inject even a modicum of drama.

“Good will always win,” Anna’s beloved godfather, Uncle Julius (a perfect Justus von Dohnányi), promises her before she leaves Berlin. That’s as accurate a summary of the movie’s message as any.

When Hitler Stole Pink Rabbit
Not rated. In German, with subtitles. Running time: 1 hour 59 minutes. In theaters. Please consult the guidelines outlined by the Centers for Disease Control and Prevention before watching movies inside theaters.