Denise Richards was everywhere in the ’90s. From James Bond and Starship Troopers to guest appearances in every television show going, it seemed you couldn’t turn on the TV without the former model staring you in the face.

That is no longer the case. Aside from the standard Hollywood answer of ‘she aged out of her 20s’, where did Richards go and what is she doing now?

Richards went straight from school into a modelling career, and in the early ’90s started showing up in guest spots (and walk-on roles) in US TV shows including Saved by the Bell, Married… with Children, Doogie Howser MD, Eerie, Indiana and Seinfeld.

She then moved on to bigger roles in Beverly Hills, 90210, Lois and Clark and Melrose Place, in which she played recurring character Brandi Carson in three episodes.

She followed up a spot in Gregg Araki indie Nowhere with her first major movie, 1997 cult classic Starship Troopers, in which she killed giant alien bugs as the cryptofascist Lt Carmen Ibanez. The following year, she appeared in the equally culty Wild Things, seducing Matt Dillon with the help of Neve Campbell, and as a bratty pageant princess in 1999 black comedy Drop Dead Gorgeous – alongside Kirstie Alley, Kirsten Dunst, Allison Janney, Brittany Murphy and Amy Adams.

But typecasting was already looming with her role alongside Pierce Brosnan in James Bond movie The World Is Not Enough. Richards played Dr Christmas Jones, a not-very-convincing nuclear physicist, and was honoured with the Golden Raspberry for Worst Supporting Actress.

Richards fell into a rut of playing undeveloped ‘sexy’ characters whose sole defining trait was that people couldn’t stop ogling them (hardly her fault). She featured in movies like Good Advice, Scary Movie 3 and Love Actually, where she made a brief guest appearance as one of the Nubile American Women Who Will Sleep With Literally Any British Man, Even Kris Marshall.

Her success in TV was better, with guest spots on Friends, Spin City and Two and a Half Men (appearing in the latter two with her then-husband Charlie Sheen). She also had her own E! reality show, Denise Richards: It’s Complicated. (It wasn’t actually that complicated.)

Inevitably, she became a contestant on Dancing with the Stars, but was voted out in the second round. Brutal.

Still, Richards has shown that she has a sense of humour about herself and her career, occasionally stopping to poke fun at her public image, such as on 30 Rock where she played herself as the celebrity spokesperson of the idiot community, and in Funny Or Die‘s sketch “Denise Richards’ Funbags”.

Various attempts to kick off TV shows starring Richards have bombed, including Sex, Love & Secrets, Twisted and Vanity, but Richards has had better luck returning to guest spots in shows like the rebooted 90210 and, more recently, Jane the Virgin. 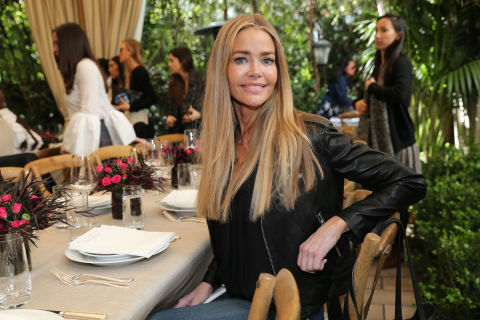 Still, she’s worked solidly for the last three decades, and outside of acting – judging by her Instagram – is still keeping things friendly with her famously troubled ex Sheen, who is the father of two of her three daughters. She also volunteers at an animal shelter and is in the habit of taking adopted old or sick dogs that might not find a home elsewhere.

What happened to Denise Richards? She’s basically the patron saint of canines now.

Proud to be part of [email protected]'s #SantaPaws2017 again this year. She's donating $10K to support one of my favorite organizations, @eastwoodranch to help make a difference. Follow her pet food @nutrish to see who else is getting involved. Happy Holidays! ??

Proud to be part of [email protected]'s #SantaPaws2017 again this year. She's donating $10K to support one of my favorite organizations, @eastwoodranch to help make a difference. Follow her pet food @nutrish to see who else is getting involved. Happy Holidays! ??

Proud to be part of [email protected]’s #SantaPaws2017 again this year. She’s donating $10K to support one of my favorite organizations, @eastwoodranch to help make a difference. Follow her pet food @nutrish to see who else is getting involved. Happy Holidays! 🐱🐶