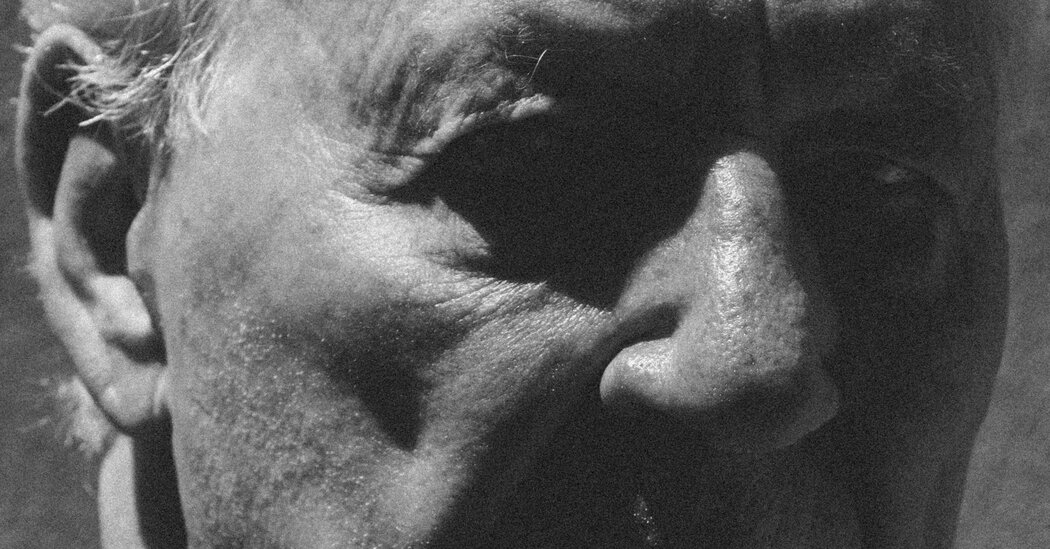 The filmmaker behind “Grizzly Man” and “Fitzcarraldo” makes a late-career foray into fiction with his new book, “The Twilight World.” He feels he has finally found his medium.

“None of my characters are extreme nor strange,” Werner Herzog said. “They are dignified human beings, and they take the struggle of life as it’s thrown at them.”Credit…Robbie Lawrence for The New York Times

Five minutes into our interview, the filmmaker Werner Herzog revealed that he doesn’t like talking about himself, or what drives him.

“My knowledge of myself is limited, and we shouldn’t get too deep into it. I don’t want this to end up like a confessional,” he said via video last month. “I still try to avoid psychological introspection.”

Herzog steers from self-reflection in part by throwing himself into work. He’s made films at an astonishing clip — more than 70 in the past 61 years, by his count.

Now nearly 80, he’s maintaining his prolific streak. During the course of the pandemic, he completed two films and wrote two books, “a memoir of ideas” and, even more surprising, a debut novel titled “The Twilight World,” due out from Penguin Press on June 14.

“The Twilight World” blends elements of memoir, history and fiction to tell the story of Hiroo Onoda, a Japanese intelligence officer who in 1974 emerged from the jungle on an island in the Philippines, wearing a tattered military uniform and carrying a rifle held together with tree bark.

He had been hiding since 1944, refusing to believe that World War II had ended. When Onoda returned to Japan, he became a celebrity, his story of perseverance eventually inspiring feature films, documentaries and his autobiography.

Herzog met Onoda in 1997, when he traveled to Tokyo to direct an opera, and felt an instant kinship.

“It’s very hard to explain,” said Herzog, who compared the feeling to the jolt of recognition he felt when he first saw his wife Lena. “We had an instant rapport, and he understood that I was not a journalist with a catalog of questions, but a poet.”

Ever since, Herzog toyed with the idea of making a movie about Onoda, who died in 2014 at the age of 91. But Herzog felt film was the wrong medium for the story. It would be too hard to capture Onoda’s experience of living in a self-generated time warp, the way minutes would drag and years would flash by, he said. So instead, he wrote a novel about him. 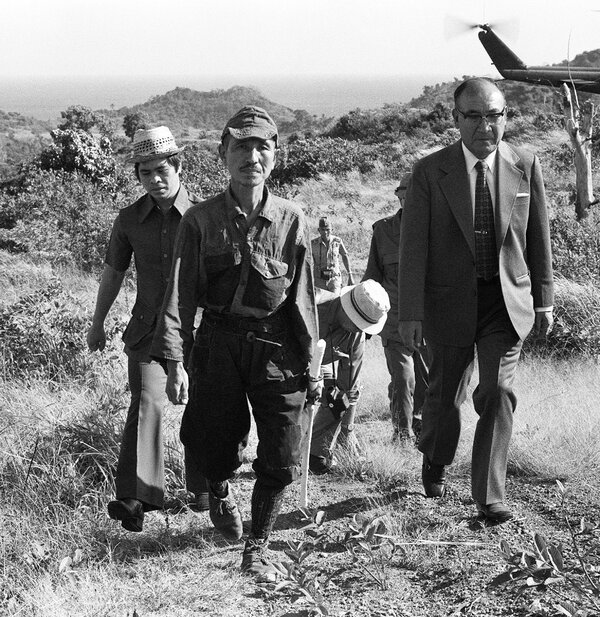 “The Twilight World” is a surprising late-career turn for Herzog, who is known for art-house classics like “Fitzcarraldo” and “Aguirre, the Wrath of God,” and searching, existential documentaries like “Grizzly Man,” “Cave of Forgotten Dreams” and “Into the Inferno.” But Herzog thinks of himself primarily as a writer — he has written poetry and kept journals throughout his career — and has long maintained that his writing, not his films, will be his legacy. With “The Twilight World,” Herzog feels he has finally found his medium.

“It’s odd, but I can explain it easily in a sort of dictum: My films are my voyage, and my writing is home,” he said.

“The Twilight World,” which was translated from German by Michael Hofmann, unfolds over 132 pages. Most of the narrative takes place in the claustrophobic, delirious confines of the jungle, an environment Herzog is intimately familiar with and evokes with eerie precision.

“I function well there,” he said. “It’s a place of fever dreams.”

As he does with his documentaries, which he often narrates, Herzog inserts himself in the story as a guide. The novel begins with his account of meeting Onoda, then jumps back in time to the island, where Onoda was held captive by his own self-delusion. Even when Herzog recedes into the background, adopting the voice of an omniscient narrator, the prose is unmistakably Herzogian: “Onoda’s war is formed from the union of an imaginary nothing and a dream, but Onoda’s war, sired by nothing, is nevertheless overwhelming, an event extorted from eternity.”

“His is just one of the great inimitable voices in any form,” said William Heyward, who acquired the novel and Herzog’s forthcoming memoir, tentatively titled “Every Man for Himself, and God Against All,” for Penguin.

Herzog spoke to me over Zoom last month from Austria. He sounded slightly hoarse but seemed in good spirits, having just finished recording the audio edition of “The Twilight World,” right after narrating the German audiobook for his memoir, which comes out in August. (The English version is currently being translated but does not yet have a publication date.)

From ‘The Twilight World’

He wrote both books during the pandemic. He also recently finished work on two new films — “The Fire Within,” which Herzog described as “a requiem” for two French volcanologists who died 30 years ago in an eruption in Japan, and “Theater of Thought,” a documentary about the enigmatic nature of the brain. “It has a lot about performative life, the fiction of life,” Herzog said. “Even mice sometimes prefer a fictitious reality to the real-life reality.”

In conversation, Herzog radiates intensity. He seems incapable of small talk or explaining his craft, instead delivering a series of observations about the slippery nature of time, the mutability of consciousness and the way people (and mice, apparently) fabricate their own realities.

When asked how he arrived at the structure of his novel, which zigzags from the 1990s to the 1970s to the 1940s and then forward again, he replied with a koan-like commentary on the illusion of chronology: “We settle ourselves into a grand fiction of present time. It is a fiction. Technically present time does not exist. Our sense of present time is technically impossible, because when you lift a foot from the ground, lifting it up is already past, setting it down on the ground is already future.”

Herzog bristled slightly when I asked why he is drawn to stories of zealots who go to extreme lengths to pursue their obsessions — figures like Timothy Treadwell in “Grizzly Man,” whose quest to commune with bears ended with his being mauled to death, and Lope de Aguirre, whose mission to find a lost city of gold was chronicled by Herzog in his 1972 historical drama “Aguirre, the Wrath of God.”

“They are all family. You recognize your siblings,” he said of his subjects. “I think none of my characters are extreme nor strange. They are dignified human beings, and they take the struggle of life as it’s thrown at them.”

Herzog has an affinity for stunts, mayhem and catastrophes. He ate his boot after losing a bet. He ate maggots to coach the actor Christian Bale, who had to eat them for a scene in “Rescue Dawn.” He flung himself onto a cactus patch to cheer up a crew after a series of on-set disasters during the production of his 1970 movie “Even Dwarfs Started Small.” In the winter of 1974, he walked 600 miles from Munich to Paris to visit a dying friend, the German film critic Lotte Eisner, a journey he documented in his book “Of Walking in Ice.” He pulled Joaquin Phoenix out of a car crash in Los Angeles. Days before rescuing Phoenix, he had been shot with an air rifle while giving an interview to the BBC. (He judged the injury to be minor and continued the interview.)

His film productions have been marred by freakish accidents. While making “Fitzcarraldo” in the Peruvian jungle, Herzog insisted on hauling a 320-ton steamship up a mountain, leading to multiple injuries among the crew. The production weathered other setbacks, including two plane crashes, a fire that burned down the set and a crew member who suffered a venomous snakebite and had to amputate his own foot with a chain saw. Herzog himself has suffered for his art, contracting malaria and blood parasites on location.

His eccentricities are so intertwined with his work and public persona that at times, Herzog can seem like a caricature of himself. But some who know him or have studied his work dismiss that image as a distortion.

“The idea of Werner Herzog as a madman is such a clichéd, terrible idea,” said Paul Holdengräber, director of the Onassis Foundation, a cultural center in Los Angeles, who has interviewed Herzog and studies his work. “He’s imaginative, yes. He’s been close to madness, but he couldn’t be more in touch with the world, truly and deeply.”

Born in Munich in 1942, Herzog had a tumultuous childhood, uprooted by war and marked by poverty. His family fled Munich after the city was bombed and settled in a village on the Austrian border, where they lived without running water or mattresses. Herzog didn’t see a film until he was 11, something he used to forge his distinctive style.

“I saw cinema so late in life for the first time, I didn’t know it even existed, so I had to invent it,” he said.

Herzog fell under the spell of American B-movies like “Zorro” and began writing screenplays. He started making his first movie, “Herakles,” when he was just 19. He released his first feature film, “Signs of Life,” in 1968, to immediate acclaim from critics and prize juries, a reputation that was solidified in the 1970s and ’80s as he delivered a string of award-winning films.

For the past two decades, Herzog has lived in Los Angeles, in a bungalow in Laurel Canyon, with Lena, a photographer. Other than reading and cooking for friends, he has few hobbies, and most of his time is consumed by his work (“I’m a working man,” he said more than once).

Herzog has published a handful of nonfiction books, including “Of Walking in Ice” and “Conquest of the Useless,” an account of the calamities that befell the production of “Fitzcarraldo.”

Although he professes to have few literary influences — “My prose is somehow very much homegrown,” he said — he is a wide-ranging and passionate reader. Asked about his favorite authors, he rattled off a list that included J.A. Baker, Hemingway, Conrad, Virgil (“‘Georgics,’ not the ‘Aeneid’”), an anonymous Norse poetry collection and Friedrich Hölderlin, a German poet and philosopher (“Almost untranslatable, because he became insane fairly young”).

Though he started late, fiction came naturally, Herzog said. He began working on “The Twilight World” in the fall of 2020, when he was unable to make movies during the pandemic, and Lena suggested that he occupy himself with writing. He based the story on conversations he had with Onoda, and consulted Onoda’s autobiography to verify details.

“He lived some sort of a fictitious war, it was a figment, a fantasy, it was fever dreams in the jungle, but he solidified the fiction into a real war,” Herzog said. “It became something beyond logic, beyond our logic, but for him it had logic, and that makes him tragic.”

For Herzog, Onoda’s story represents a feat of imagination that is almost as admirable as it is delusional. It’s also, to Herzog, not strange at all.

“I do believe that to a certain degree we all live a certain fiction that we have accepted and articulated and formulated for ourselves,” Herzog said. “We are permanently in some kind of performance.”