A historical look back at Orson Welles’s production of “Macbeth” with an all-Black cast in Harlem in the 1930s. 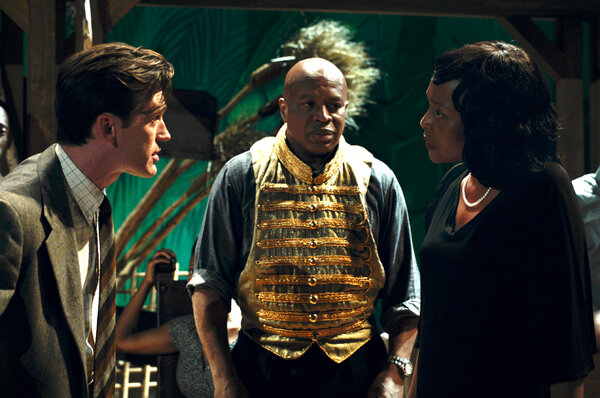 When the theatrical production featuring the first all-Black cast of “Macbeth” opened in Harlem on April 14, 1936, it was quite the event. According to an article on the Library of Congress website, “At 6:30 p.m., 10,000 people stood as close as they could come to the Lafayette Theater on Seventh Avenue near 131st Street, jamming the avenue for 10 blocks and halting northbound traffic for more than an hour.”

The film “Voodoo Macbeth” tells the story of how this groundbreaking production came to be, from the perspective of a then 20-year old “genius” Orson Welles (Jewell Wilson Bridges), who adapted and directed the play, switching out Shakespeare’s Scotland for Haiti.

From its opening scene, a P.O.V. shot of the theater producer John Houseman watching the Broadway actress Rose McClendon rehearse — to its final scene, Welles taking a victory walk into the night in a cloud of cigarette smoke, “Voodoo Macbeth” proves itself to be a textbook white savior film and not much else. Welles and Houseman (Daniel Kuhlman) are the heroic subjects and McClendon (Inger Tudor) and the other Black cast members are stilted objects forever in need of their saving.

Interestingly, the film’s writing and directing credits belong to 18 people, eight screenwriters and 10 directors, all of whom are either current graduate students or recent alumni of the University of Southern California. And with this many cooks in the kitchen, the film’s flatness is hardly surprising. But the movie’s repetition of mirror shots are an appealing, if not derivative, visual through-line in the film.

With such a gross misinterpretation of the source material (why invent Welles onstage in blackface?) it’s fitting that the most engaging part of “Voodoo Macbeth” turns out to be the archival footage of the real-life production that plays alongside the credits.