Breaking News
What's Hamilton about on Disney+, who's in the cast and how long is it?
DMA's can’t wait to get back on the road with The Glow to give fans escape from reality
‘Katy Keene’ Canceled By The CW After One Season; ‘Riverdale’ Spinoff Series To Look For New Home
15 Times 'The Simpsons' Predicted the Future (Photos)
Skip to content

It might not be the greatest film ever made, but Orson Welles' portrait of a media baron who got everything and nothing he wanted belongs on everybody's shortlist. A lament for lost innocence, a trenchant political cartoon and a dazzling piece of showmanship, this remains the cornerstone of the Welles myth. 35mm print. Astor, Sunday, March 24, 4pm. 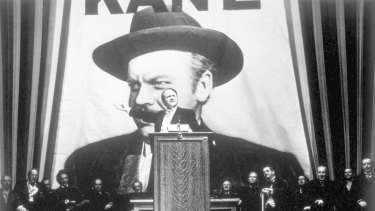 Orson Welles as the lead role in his film Citizen Kane.Credit:Hulton Archive

The films of writer-director-star Valeria Bruni Tedeschi have a distinctive, playful tone, mingling reality and fiction with uncommon freedom. This one casts her as a filmmaker with a complicated love life and a bunch of eccentric relatives, many of whom congregate at the country house of the title. Screens as part of the French Film Festival. Cinema Como, Sunday, March 24, 10.30am.

In the early 2000s, J.T. Leroy was known as a precocious queer "literary outlaw" with a host of celebrity fans – but nothing was quite as it appeared. This dramatised version of the story stars the dream team of Laura Dern and Kristin Stewart as the two key figures behind the scenes. This special presentation marks the closing night of the Melbourne Queer Film Festival. ACMI, Sunday, March 24, 7.30pm.