Speaking at ACE Comic Con, the actor revealed that the ‘Get help’ scene in Thor: Ragnarok, in which Thor convinces Loki to use a childhood trick to get past the Grandmaster’s guards, was his favourite bit of improvisation. 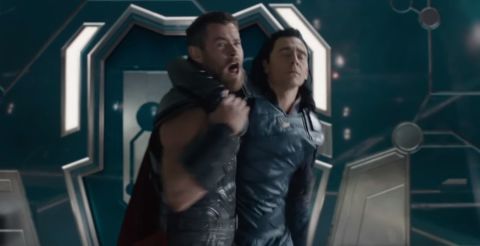 Holding his own interview with fellow MCU actress Elizabeth Olson, Hiddleston explained how the scene was made up on the day and that it helps the audience understand something deeper about their brotherly bond.

“I think that the one that’s kind of had its own life after the film is ‘get help,'” he said. “We literally just came up with it on the day.

“As something, this idea that this is a trick that Thor and Loki used to, you know, they used to use it as a game when they were kids and they stopped doing it a long time ago but it used to work and it might just work this time. They got one last ace up their sleeve.

“And the idea that Loki hated it, and just was like, ‘I don’t want to do it. It’s humiliating’. And that Thor was like, ‘You’re going to love it! Come on!’ in a big brother way. And then it works.

“In that moment, I always love the fact that it wasn’t just a funny moment, but actually, you understand something deeper about them as brothers, and I think those moments are really special.”