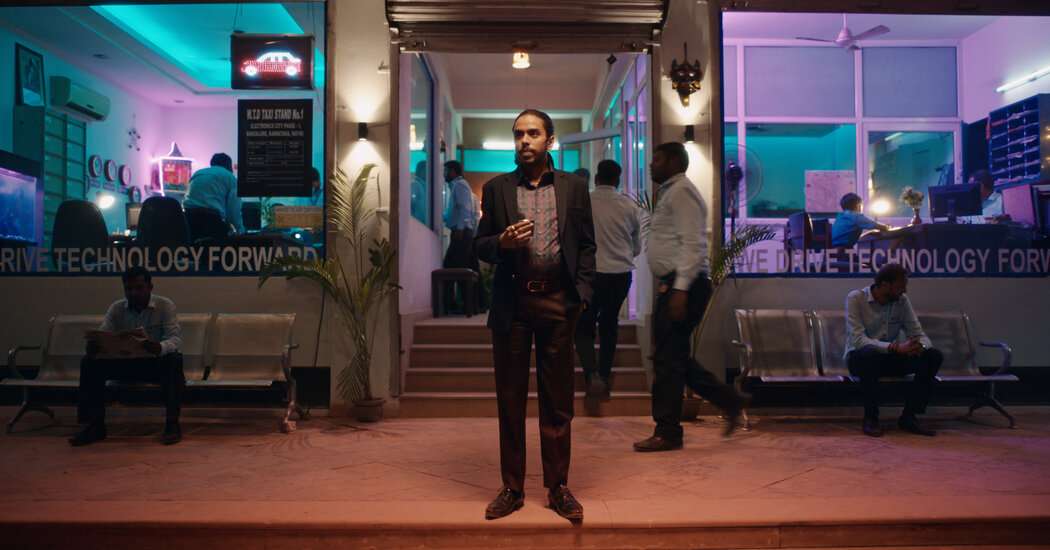 According to Balram, a wealthy young Bangalore businessman, “the Indian entrepreneur” must be a combination of opposites: “straight and crooked, mocking and believing, sly and sincere.” He explains this in a letter to the Chinese prime minister that doubles as voice-over narration for “The White Tiger,” Ramin Bahrani’s restless new film, which is itself a blend of disparate elements. Adapted from Aravind Adiga’s Booker Prize-winning novel, the movie is part satire and part melodrama, a crime-tinged rags-to-riches parable that uses the story of Balram’s improbable rise to indict the iniquities of the society that created him.

Balram (Adarsh Gourav) composes his letter in 2010 and addresses it to Wen Jiabao, China’s premier at the time. Most of the action — the events that led Balram from poverty to his current status — takes place a few years earlier, in Delhi and the rural village where he grew up. In spite of this, “The White Tiger” bristles with present-tense energy. History has only confirmed the signs that Balram, an astute self-taught observer of the tides of fortune, sees around him. “The white man,” he writes to Wen, is on the way down, while India and China, “the yellow man and the brown man” are in the ascendant.

But geopolitics isn’t his main concern. For most of his life, Balram has been preoccupied with survival, with understanding his place in a cruel system and figuring out a means of escape. Born into a caste of candy-makers, he quickly concludes that the complex stratification of Indian society has devolved into a simpler hierarchy of masters and servants. His preferred metaphor for the condition of the poor is “the rooster coop.” He and his fellow have-nots are crowded together, pecking and squawking and waiting to see who will be slaughtered next.

The title of the movie suggests a different metaphor, one that Balram clings to through years of suffering and privation. A white tiger is a rare, once-in-a-generation phenomenon. The idea is that in a country defined by rigid inequality, a self-made man is that kind of beast.

You may remember another English-language film set in India whose hero followed a similar trajectory, and “The White Tiger” positions itself, sometimes explicitly, as a response to “Slumdog Millionaire.” It isn’t luck, pluck or happy coincidence that propels Balram from his ragged beginnings to sleek triumph, but cunning, desperation and a coldbloodedness that can masquerade as servility. The spirit of Charles Dickens that hovered over “Slumdog” has been banished; Bahrani’s literary reference points (and Adiga’s) lean more toward Dreiser, Dostoyevsky and “Native Son.”

Balram receives an early education in injustice. The death of his father forces him to give up a scholarship and work in a tea shop. Balram is under the thumb of Granny (Kamlesh Gill), the family matriarch, but the local landlord (known as the Stork) and his enforcers (including the fearsome Mongoose) wield the real power. Nominal political authority belongs to a figure identified only as “The Great Socialist” (Swaroop Sampat), whose ideology doesn’t prevent her from taking bribes from old-school feudalists.

Our young hero manages to wrangle a job as the Stork’s second-ranking chauffeur. While he sometimes crosses paths with the Stork (Mahesh Manjrekar) and the Mongoose (Vijay Maurya), most of his time on the job is spent in the comparatively pleasant company of the boss’s son and daughter-in-law, newly returned from America. Ashok (Rajkummar Rao) and Pinky (Priyanka Chopra Jonas) represent a modern, cosmopolitan variant of the traditional ruling class. They don’t like the rough way the Stork treats Balram, whose practiced servility makes them a little uncomfortable. At the same time, Ashok seems mostly fine with the basic master-servant dichotomy and his place within it.

Is Balram also happy? He is certainly cheerful in the company of his employers, and whether his smile represents slyness or sincerity is a question of some consequence. But though Gourav is a charming and energetic performer, able to convey the contrasting sides of Balram’s temperament, there is an element of inwardness — a sense of the character’s struggles, desires and motivations — that is missing.

It may be that Balram doesn’t fully trust his audience, that we — which is to say Wen Jiabao — aren’t entitled to his deep thoughts and private yearnings. This is, after all, a tale told by a man with something to prove, a kind of PowerPoint presentation intended to impress the leader of a rising superpower. Balram is aware of his status as a white tiger, which is to say as a symbol.

The problem is that everyone else seems that way too. The plot is lively, and the settings vividly captured by Bahrani and the director of photography, Paolo Carnera, but the characters don’t quite come to life. They aren’t trapped by prescribed social roles so much as by the programmatic design of the narrative, which insists it is showing things as they really are. If it wasn’t so insistent, it might be more convincing.