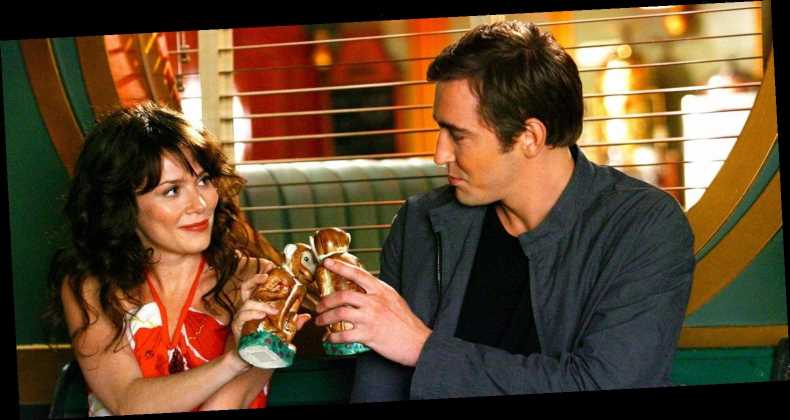 (Welcome to The Quarantine Stream, a series where the /Film team shares what they’ve been watching while social distancing during the COVID-19 pandemic.)

Where You Can Stream It: HBO Max

The Pitch: Ned (Lee Pace) is an unassuming pie maker who possesses the rare ability to bring the dead back to life with a single touch. Using his ability to help a private investigator (Chi McBride) solve murders on the side, Ned discovers that his childhood sweetheart Chuck (Anna Friel), is the latest victim, from a supposed accident aboard a cruise. Unable to resist bringing Chuck back from the dead permanently, Ned and Chuck revive their romance with one caveat — they can’t touch, or she’ll go back to being dead permanently.

Why It’s Essential Viewing: An oddball television series as weird, and creepy, and whimsical as Pushing Daisies isn’t destined to last long on network TV, and alas, it fulfilled that destiny. But we got two perfect seasons of Bryan Fuller‘s candy-colored fairy tale, even if the roller coaster that was the show’s almost-cancelation, renewal, then cancelation again broke high school me’s heart.

I remember flipping on the TV late one night to ABC and stumbling upon an episode of Pushing Daisies, as series that appeared to be a sugar-infused bizarro version of a procedural. It was the second episode of season 1, “Dummy,” on a late-night re-run during the show’s off season. Little did I know that I would fall in love with a show that would give me the first pangs of TV renewal grief, and set me on a path of falling for niche shows that would be perpetually on the verge of cancelation.

But in the meantime, I was entranced by Pushing Daisies‘ brand of morbid magic. The characters were blushing romantic heroes, dressed in bright colors and florals that might be called gaudy, on brightly-lit artificial sets that made the whole world seem unreal — even more so when corpses started to come to life, bantering away with glass stuck obscenely out the side of their faces. The dialogue was snappy, the jokes were gut-busters (sometimes literally), and Kristen Chenoweth occasionally burst into song. It was wonderfully strange and unlike anything I’d seen on TV, and I ate up every minute of it.

Pushing Daisies was Bryan Fuller’s (of Dead Like Me, Wonderfalls, and Hannibal fame) love letter to the grotesque, a burst of technicolor whimsy and clever witticisms that almost seemed to outright reject its darker subject matter. “But what if death and love are not so far apart?” Pushing Daisies asks, centering this question around our main couple, Ned and Chuck, whose touch-less relationship formed the beating heart of the series.

But it was the colorful cast of supporting characters that really made the show sing — not least of all Kristen Chenoweth as the chirpy Olive Snook, Ned’s employee at the Pie Hole who nursed an unrequited crush on him, and was most likely to burst into extravagant musical numbers. McBride was the hilarious straight man, a no-nonsense private eye who seemed to have been dropped in from a completely different show, and aware of that too. And there were Chuck’s quirky aunties Vivian and Lily (Ellen Greene and Swoosie Kurtz), two agoraphobic former synchronized swimmers who live in a Victorian mansion shaped like a gingerbread house.

Pushing Daisies was gone too soon, but at least now we’ll get to relive those two glorious seasons on HBO Max now.