In the early storylines for the first Star Wars film, Luke Skywalker went through multiple design changes. At one point, the young hero was a 60-year-old grizzled war veteran, later a Jedi Master, and then a woman before George Lucas settled for Luke as one-half of twins.

Yoda was originally conceived as a gnome-like figure with the given name Minch.

''He looked like a gnome,'' said exhibition curator Damian McDonald. ''He was a little man with a red pointy hat and long white beard. Like a Santa elf.'' 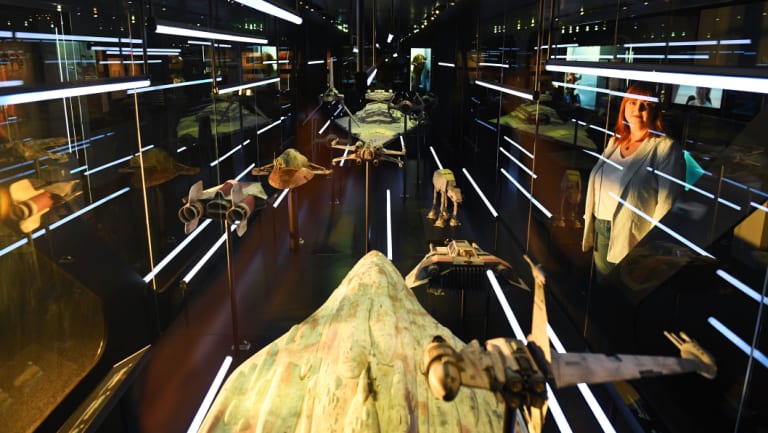 Laela French, director of archives at the Lucas Museum of Narrative Art.Credit:Nick Moir

Models, costumes, props and original artwork used to bring Lucas's vision to life are among 200 objects which have been brought from the Lucasfilm archives to Sydney.

They are among tens of thousands of items from the six Star Wars movies, 1977 to 2005, including Episodes two and three shot in Sydney's Fox Studios, that are housed at Skywalker Ranch, the filmmaker's retreat in California.

The visual development of the Star Wars' characters is the starting point for the exhibition's exploration of personal identity, which allows visitors to develop their unique Star Wars character profile and examine their own choices through the lens of characters' struggles with the dark side of their natures.

'There is the classic nature versus nurture issues but also life-changing events and who you choose to be friends with and who you have as a mentor in your life,'' said McDonald. ''It is framed by the Star Wars universe but [the exhibition] uses real-world science in the fields of neuropsychology, psychology, and biochemistry, to [explain] those choices.'' 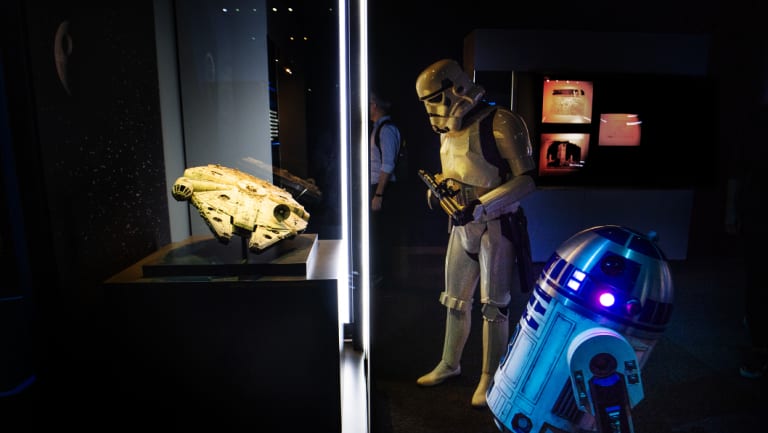 Are you a Wookiee or Jedi Knight? Or maybe an Ewok with fighter-pilot skills? The new Star Wars exhibition leads visitors on an identity quest.Credit:Louise Kennerley

Forty years since the first film, McDonald said the secret of the franchise's longevity lay in Lucas's use of archetypes from Greek mythology and Shakespeare.

Overlayed with more contemporary, American narratives around the wild west and war, the filmmaker spoke to a post-war generation who had lived through or were aware of the horrors of World War II.

''What Disney is doing now, they are definitely trying to get Star Wars to speak to a new generation with their inclusion of a lot more female heroes and strong female characters, and there'a little bit more social justice hinted at in the last two movies,'' McDonald said.

Laela French, director of archives at the Lucas Museum of Narrative Art,  said the warehouse where the Star Wars collection is housed looks rather ''like the end of Indiana Jones'', referring to the wide panning shot at the end of Raiders of the Lost Ark where the ark is stored in a vast military depository.

''It started because when George was making A New Hope in 1977; he was going slightly over budget because of all the effects shots he wanted to create, and that's where he did the famous negotiation where they gave him extra money and where he got the marketing rights.

''But in that was the idea he didn't want the constraints of the budget going forward if he could make more films so he started saving the props and models because they were expensive to make. He was being thoughtful and thrifty and budget conscious.''