Because of the effectiveness of his performance in The Social Network I still think of Jesse Eisenberg as Mark Zuckerberg’s alter ego.

And there are echoes of his Zuckerberg in this film, which takes you into the world of Wall Street’s high-frequency share traders – the gamblers who exploit the speed of the market’s electronic systems to make millions with a single transaction.

Michael Lewis took a look at them in his 2014 bestseller Flash Boys, which begins with the laying of an underground fibre optic cable between Chicago and New Jersey, a mammoth construction job undertaken by a company determined to cut four milliseconds off the time it was taking to send trading information across the country. 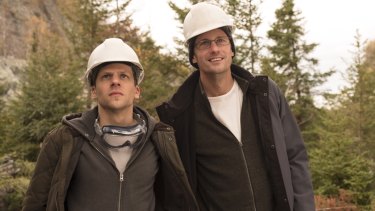 Eisenberg’s Vince Saleski, a Wall Street hustler, and his cousin Anton (Alexander Skarsgard), an electronic engineer with a touch of genius, are trying to raise money for a similar scheme in the opening scenes of The Hummingbird Project.

Their cable is to run straight from Kansas to New Jersey and they’re trying to set it up without the knowledge of Anton’s boss, Eva Torres, played by an unnervingly driven and all-knowing Salma Hayek.

Skarsgard, with his looks camouflaged by baldness, a stoop and an oversized pair of glasses, seems as if he might crumple under the strain of taking on this risky enterprise, but he proves to be surprisingly stubborn. Or maybe he’s just afraid of being nagged to death by Vincent.

It’s an unlikely premise for a movie with only a superficial similarity to The Wolf of Wall Street and The Big Short. They were set inside the financial crucible among the system’s arch manipulators, while this is a quixotic tale about a couple of outsiders whose dream of success is about to send them out to the country – that’s if Anton can overcome his fear of flying.

Their most dramatic confrontation turns out to be an encounter with an Amish elder, who objects to having a cable run under his land– which is understandable. 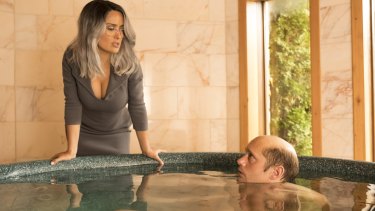 Salma Hayek and Alexander Skarsgard in The Hummingbird Project.

Vince is no silver-tongued persuader. He sounds too desperate. Nor does the script succeed in invoking your sympathy when it hits him with a life-threatening disease.

Yet the bond between him and Anton, who grows wackier by the minute, does produce the necessary alchemy and against all the odds, they become strangely endearing.

And they wise up. By the end of the film, they, too, can tell that their cable is not so much a grand venture as a monument to the corrosive power of the system at its greediest.

It's an odd tale, but in its sneaky way, an unexpectedly engaging one.