Acclaimed teen drama The Hate U Give arrives this week in the UK – just in time for Black History Month – with a powerful message about standing up to prejudice and police brutality.

Star Amandla Stenberg, director George Tillman Jr and Angie Thomas – the author of the novel on which the film is based – spoke to Digital Spy about colourism, representation and attempts to ban the book. 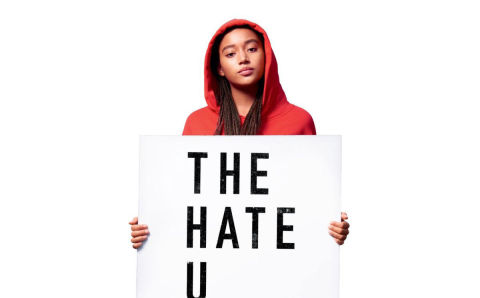 Stenberg talked about her increasing awareness of the privilege she has thanks to her lighter skin, as well as experiences where she has not felt ‘black enough’.

“I never experienced it growing up,” she said. “I think it’s very specific to the times we’re living in now. In the eyes of white people, I was just black – there was really not that much more nuance to it.

“But especially recently, this conversation on colourism has been coming up, and I’ve had to recognise and be vocal as a responsibility around being lighter-skinned and bi-racial, and the accessibility that that affords me.

“It’s good to recognise privilege,” she also told us, “but sometimes it does hurt to feel like I’m not fully accepted by my own community. Where else am I going to go? I live a black experience. I walk out of my door every day black, and that’s how the world sees me.

“So there have been moments where I have felt that way, and we got to explore that a little bit in the film too.”

Thomas said that she wrote the story particularly for young people of colour like the characters in The Hate U Give, and lamented that “people who had obviously not read the book” had been trying to get it banned.

“I wish that people would actually give it a chance before they write it off,” she told us. “Just because it makes you uncomfortable doesn’t mean it’s not necessary.”

Meanwhile, Tillman (Notorious) acknowledged that representation in Hollywood is improving – although there is “some way to go” – with “more African-American filmmakers, more women, more women of colour controlling their own visions”.

The Hate U Give is out now in the US and the UK. Book tickets here.