We’ve all been there. Thanksgiving dinner is over, the plates have been cleared, the stomachs are full, and you’re a little drowsy. But you know that if you aren’t careful, the worst could happen: People could start talking to one another.

Emotions run high during the holidays, and everyone is particularly touchy these days. Why not play it smart by snatching up the remote before someone turns on a football game? Plenty of terrific movies are available to stream or rent online (Thanksgiving-themed and otherwise); here are some suggestions, based on the holiday company you’re keeping.

With Your Significant Other 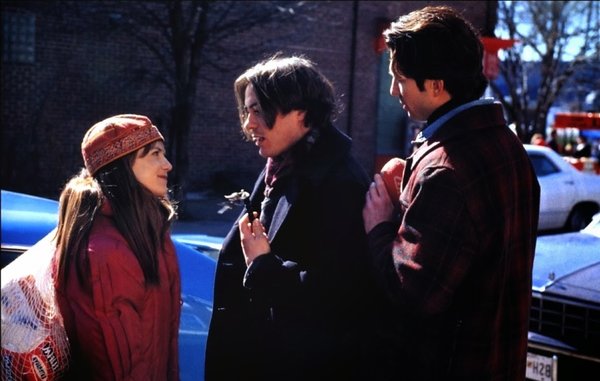 ‘Home for the Holidays’

Talk about relatable: Claudia Larson (Holly Hunter) returns to her hometown for Thanksgiving feeling like an abject failure. She just lost her job, she made out with her boss on her way out the door, and her teenage daughter is staying behind with the stated goal of losing her virginity. Luckily, she falls into the arms of Dylan McDermott over the Thanksgiving weekend, which understandably softens the blow of the other stuff. This 1995 comedy, directed by Jodie Foster, also offers up the pleasures of Anne Bancroft and Charles Durning dancing to Tom Jones, and, bonus, Robert Downey Jr. sporting a vintage, post-Hugh Grant floppy ’90s guy haircut. (Also streaming on Amazon: “You’ve Got Mail,” in which Tom Hanks saves Meg Ryan from a Thanksgiving Day shopping faux pas in the Zabar’s checkout line.)

With Your Goth Niece or Nephew

If you find yourself sharing the couch with the family’s disaffected emo youth, introduce them to the O.G. (Original Goth): Wednesday Addams, brought to uproarious life by Christina Ricci in two early ’90s big screen adaptations by the director Barry Sonnenfeld. This second chapter, released in 1993, is not only a rare example of a sequel that’s more than equal to the original. It is also holiday appropriate, as little Wednesday takes over the re-enactment of the first Thanksgiving pageant at summer camp and quite literally burns it to the ground. Keep an eye out for Christine Baranski as one of the cheery (and thus suspect) proprietors of “Camp Chippewa.” (Also available for rental: “Edward Scissorhands,” a seasonal favorite from the goth godfather Tim Burton.)

With Your Nostalgic Grandparents

How to watch: Stream it on Disney+; rent or buy it on Amazon, Google Play, iTunes, Vudu and YouTube.

There’s a pretty good chance someone put on the Macy’s Thanksgiving Day Parade broadcast earlier in the day, so this 1947 classic matches up nicely: It begins at that very event, where “Kris Kringle” (Edmund Gwenn) shames a sloppy-drunk Santa and is hired on the spot as his replacement. (It would take more than a half century for a sloppy-drunk Santa to find proper onscreen representation in the form of Billy Bob Thornton as “Bad Santa.”) The premise of “Miracle” — that a department store Santa is actually the real thing — was so juicy that the film was remade twice, but neither recaptured the charm and magic of this initial offering. It’s a film that truly earns its classic status, continuing to enchant viewers young and old. (Another holiday classic, “It’s a Wonderful Life,” is currently streaming on Amazon.)

With Your Argumentative Uncle

‘Scent of a Woman’

Everyone’s got that one uncle (or aunt, or grandparent — you know who they are) with whom it’s best to steer clear of conversation about politics, or social issues, or frankly just about anything. There are plenty of reasons to queue up this 1992 drama, beyond even its Thanksgiving weekend setting. First, it’s about respecting your elders (even if they’re roaring, rude and borderline suicidal). Second, it stars Al Pacino, and what crotchety uncle doesn’t love “Scarface” and “The Godfather”? And finally, it runs a leisurely two hours and 36 minutes, so maybe by the time it’s over, the tryptophan will have done its work. (If you’d like to avoid dialogue entirely, try “The Last Waltz,” a documentary of the Band’s final concert, shot on Thanksgiving Day, 1976.)

With That Rambunctious Kid Who Belongs to … Someone

‘The Nightmare Before Christmas’

How to watch: Stream it on Disney+; rent or buy it on Amazon, iTunes, Vudu, YouTube, and Google Play.

Seriously though, whose child is this? And what does it take to calm him down? Well, since Thanksgiving falls squarely between Halloween and Christmas, it’s an optimal time to queue up this kidcentric 1993 comedy-musical from the producer Tim Burton and the director Henry Selick, in which the “Pumpkin King,” Jack Skellington, tries to merge the sensibilities of these two holidays. Featuring songs by Burton’s frequent collaborator (and Oingo Boingo alumnus) Danny Elfman, “Nightmare” is a real treat as long as the kids in question aren’t too young. On second thought, show it to the toddlers anyway: They’ve got to grow up sometime, right? (If you’re looking for something a little lighter, you can’t go wrong with the animated “Spider-Man: Into the Spiderverse.”)

With Your Vulgar Siblings

On one hand, this 1987 road comedy from John Hughes is appropriate for the entire family: It takes place over the Thanksgiving weekend. It dramatizes the never-say-die exploits of two men who will do anything (anything) to get home in time for dinner with their families. And it encompasses a spirit of forgiveness and self-awareness that we all need to hear at this time of year. On the other hand, you do not want to watch that scene at the rental car counter with anyone even slightly squeamish about four-letter words. (The decidedly adults-only “She’s Gotta Have It,” currently on Netflix, also includes a very funny — and very awkward — Thanksgiving dinner sequence.)

With the Whole Family

How to watch: Stream it on Disney+; rent or buy it on Amazon, Google Play, iTunes, Vudu and YouTube.

It’s hard to find a Thanksgiving-themed movie that will entertain absolutely everyone (and not offend), since so much of the cinema centered on this particular holiday is about dysfunction, misery and failure. But the most commercially successful movie of the year, a guaranteed crowd-pleaser, is streaming right now — and, well, if you really think about it, the “Avengers” movies have always concerned the difficulty of getting a group of clashing personalities together in one place, in pursuit of a common good. Isn’t that really what Thanksgiving is all about? (Or, if you’d prefer to start an argument, ask your family to choose between this movie and Martin Scorsese’s new film, “The Irishman,” on Netflix, and watch the fireworks.)

With Your Friendsgiving Crew

‘Dolemite Is My Name’

How to watch: Stream it on Netflix.

If you’re spending the holiday with your surrogate family, here’s a story about another. The freewheeling biopic from Craig Brewer stars Eddie Murphy as Rudy Ray Moore, a middle-aged would-be entertainer who crafted a memorable stage persona of a rhyme-spouting hustler named “Dolemite,” which made him the unlikely center of a nightclub act and feature-film career. Moore was one of the dirtiest stand-ups on the circuit, so this one is definitely for adult eyes (and ears) only. But beyond the four-letter words is a genuine sweetness: Moore is supported by a loose family of friends, collaborators and fellow outsiders, and the film’s “follow your dreams” message is as uplifting as any holiday movie’s. (If you want something a little more in the holiday spirit, the zombie Christmas musical “Anna and the Apocalypse” is streaming on Amazon and Hulu.)

When They’re All Gone at Last

Once you’ve somehow made it through your family Thanksgiving, consider putting on this 2003 dramedy from Peter Hedges in order to appreciate how much worse it could have been. Katie Holmes stars as a free spirit who invites her estranged family (including Patricia Clarkson, Oliver Platt, Alison Pill and John Gallagher Jr.) to her rundown New York City walk-up for Thanksgiving dinner. The result is one of the few films in cinematic history to offer valuable advice on both dealing with a family member’s terminal illness and cooking a turkey without a proper oven. (Keep the “at least my family Thanksgiving isn’t like that” vibe going with “Krisha,” on Netflix.)

Jill Duggar: I Don’t Care What Jim Bob Thinks! I Am NOT Having Any More Kids!!