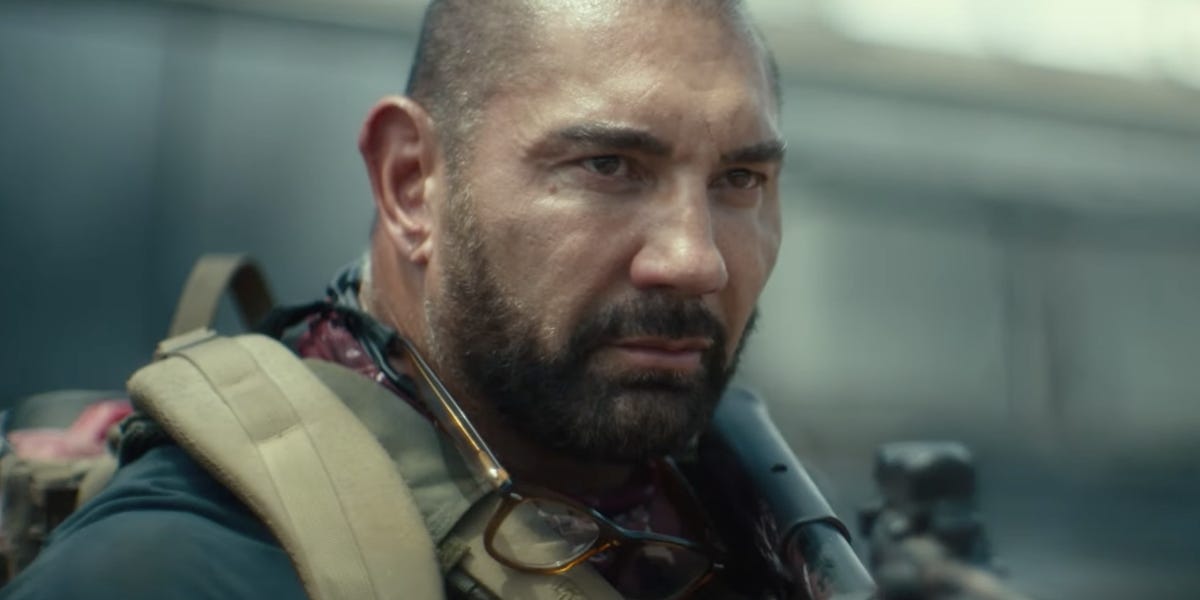 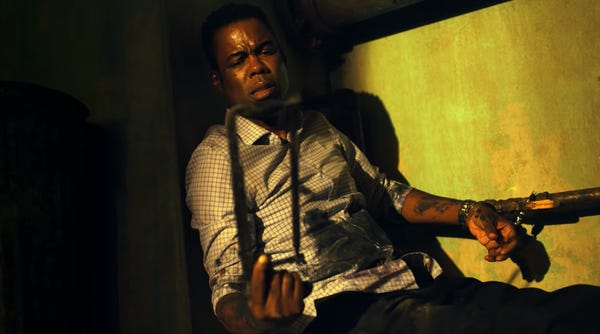 Description: “A sadistic mastermind unleashes a twisted form of justice in SPIRAL, the terrifying new chapter from the book of SAW. Working in the shadow of an esteemed police veteran (Samuel L. Jackson), brash Detective Ezekiel ‘Zeke’ Banks (Chris Rock) and his rookie partner (Max Minghella) take charge of a grisly investigation into murders that are eerily reminiscent of the city’s gruesome past. Unwittingly entrapped in a deepening mystery, Zeke finds himself at the center of the killer’s morbid game.” 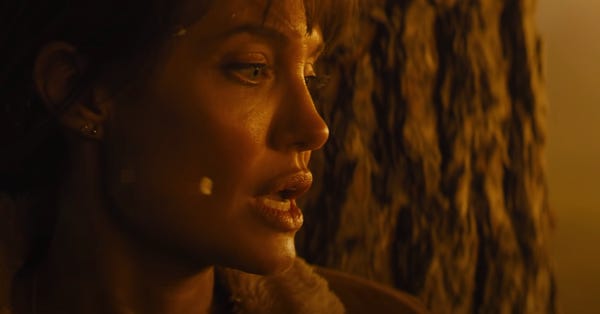 Description: “From New Line Cinema comes the thriller ‘Those Who Wish Me Dead,’ starring Angelina Jolie and directed by Taylor Sheridan. Oscar winner Jolie (‘Girl, Interrupted,’ the ‘Maleficent’ films) stars as Hannah, a smoke jumper still reeling from the loss of three lives she failed to save from a fire when she comes across a traumatized 12-year-old boy with nowhere else to turn.” 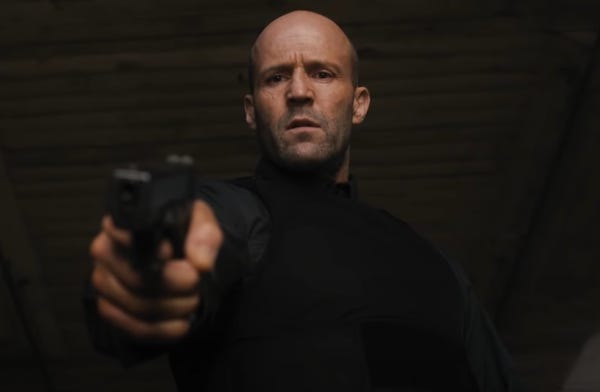 Description: “A mysterious and wild-eyed new cash truck security guard (Jason Statham) surprises his coworkers during a heist in which he unexpectedly unleashes precision skills. The crew is left wondering who he is and where he came from. Soon, the marksman’s ultimate motive becomes clear as he takes dramatic and irrevocable steps to settle a score.”

What critics said: “At core, Wrath of Man is a revenge story: to invest in the complications, we need to believe in the hero’s rage and the reasons behind it. But sincerity of any sort has never been Ritchie’s strength.” — The Age 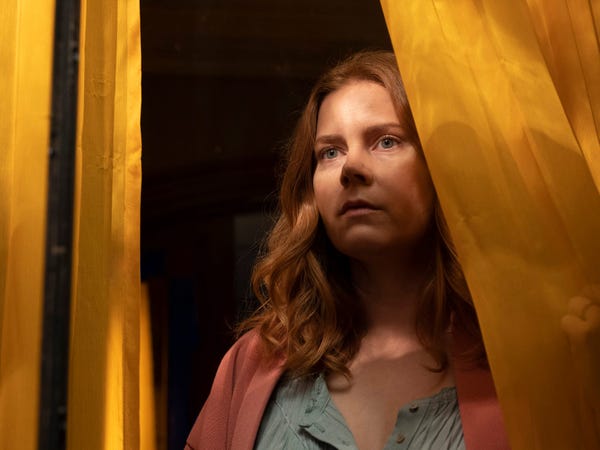 Description: “Anna Fox (Amy Adams) feels safest when she’s watching the world from behind her window. Until the Russell family moves in across the street, and she witnesses something unimaginable. The question is …what really happened?” 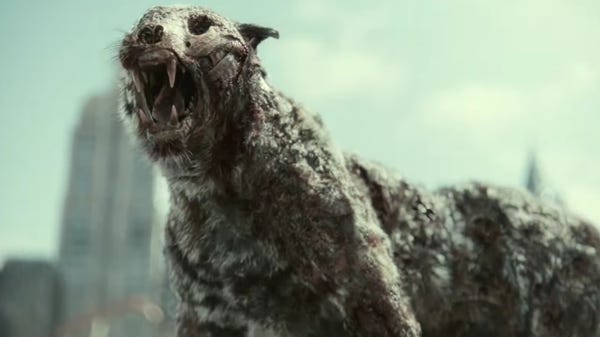 Description: “From filmmaker Zack Snyder (300, Watchmen, Zack Snyder’s Justice League), ARMY OF THE DEAD takes place following a zombie outbreak that has left Las Vegas in ruins and walled off from the rest of the world. When Scott Ward (Dave Bautista), a former zombie war hero who’s now flipping burgers on the outskirts of the town he now calls home, is approached by casino boss Bly Tanaka (Hiroyuki Sanada), it’s with the ultimate proposition: break into the zombie-infested quarantine zone to retrieve $200 million sitting in a vault beneath the strip before the city is nuked by the government in 32 hours. With little left to lose, Ward takes on the challenge, assembling a ragtag team of experts for the heist. With a ticking clock, a notoriously impenetrable vault, and a smarter, faster horde of Alpha zombies closing in, only one thing’s for certain in the greatest heist ever attempted: survivors take all.” 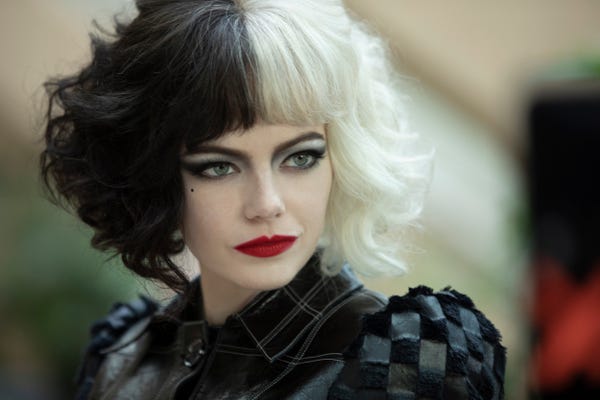 Description: “Academy Award winner Emma Stone (‘La La Land’) stars in Disney’s ‘Cruella,’ an all-new live-action feature film about the rebellious early days of one of cinemas most notorious — and notoriously fashionable — villains, the legendary Cruella de Vil. ‘Cruella,’ which is set in 1970s London amidst the punk rock revolution, follows a young grifter named Estella, a clever and creative girl determined to make a name for herself with her designs. She befriends a pair of young thieves who appreciate her appetite for mischief, and together they are able to build a life for themselves on the London streets. One day, Estella’s flair for fashion catches the eye of the Baroness von Hellman, a fashion legend who is devastatingly chic and terrifyingly haute, played by two-time Oscar winner Emma Thompson (‘Howards End,’ ‘Sense & Sensibility’). But their relationship sets in motion a course of events and revelations that will cause Estella to embrace her wicked side and become the raucous, fashionable and revenge-bent Cruella.” 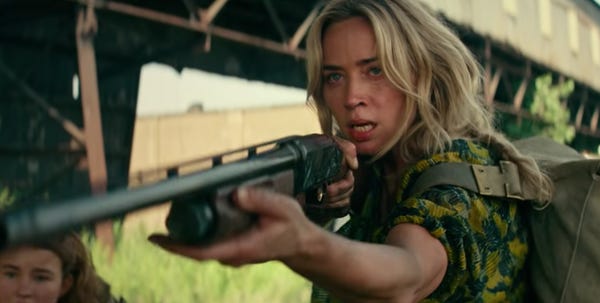 Description: “Following the deadly events at home, the Abbott family (Emily Blunt, Millicent Simmonds, Noah Jupe) must now face the terrors of the outside world as they continue their fight for survival in silence. Forced to venture into the unknown, they quickly realize that the creatures that hunt by sound are not the only threats that lurk beyond the sand path.”