Christopher Nolan is one of the most sought-after directors in the world following his groundbreaking work on enduring movies Inception and Interstellar. Tenet looks set to be no less affecting and stars the latest Batman Robert Pattinson, thespian Kenneth Branagh and John David Washington in the lead roles. But one fan theory has made the bold speculation that Kenneth Branagh is the “red herring” villain of the movie, and the real danger will come from Aaron Taylor Johnson, who so far may have only made a cameo in the clips.

It’s not surprising that the latest trailer for Tenet sent fans into overdrive, with many taking a deep-dive into what’s to come when the film is released in July.

“The true big villain of this film will be Aaron Taylor Johnson. He’s going to come out of the left field like Matt Damon did in Interstellar.

“It’s obviously conjecture but I imagine KB will be working for ATJ either directly or indirectly,” the fan passionately went on. 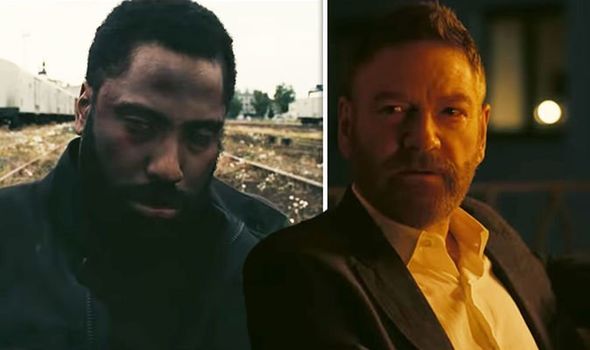 “It could be,” another Reddit user considered. “But for the first half of the movie or so, we will be seeing Branagh a lot. On a side note, did Aaron Johnson appear in the trailer?”

Some fans insisted Taylor Johnson hasn’t appeared in any Tenet promotion so far, but one was convinced otherwise.

They claimed the actor was spotted as the soldier in the red light room, further adding fuel to the theory.

As the theories rage on, many fans were bubbling over with with excitement and couldn’t only focus on their hopes cinemas will be reopened by the summer.

Given the latest updates in the COVID-19 pandemic it remains to be seen whether fans will be able to give Nolan’s latest epic the big-screen event it deserves.

“Seems to me that Nolan finally got his Bond film and the whole ‘inversion’ thing is just a little Nolan headscrew bonus. Excited doesn’t even come close to how I feel,” one person expressed.

Another joked: “Still have no idea WTF is going on in this movie and I love it. Classic Nolan.”

While a Reddit-user called FearlessGear posted: “Do the main characters in suits standing in the middle of the street explaining the plot to each other scream inception to anyone else?

“Gave no weight to the inception sidequil theory until this trailer – the similarities are undeniable.

“This trailer had major inception energy,” a fourth noted.

And a fifth said: “I’d be more hyped if it didn’t create more questions than answers but that’s part of the fun, I guess…

Nothing in the trailer really stood out to me, though, yet I’m dying to know more. Much more.”

Tenet is released in cinemas in July.