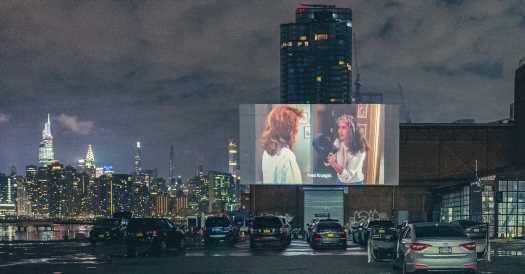 The outdoors is a terrible place to be if you’re in a horror movie being pursued by a knife-wielding maniac. He’ll always know the woods better than you.

But for horror-movie fans, outside has been a refuge this past year. When theaters went dark, old-school drive-ins stayed alive with the help of scary movies, some of which became box-office hits, at least by pandemic standards.

This summer, outdoor venues in and around New York continue the promise of spine-tingling nights under the stars. Most of their programming is heavy on blockbusters, classics and children’s films, but a few evenings are devoted to actual screams. From creepy-cuddly animated films for kids to terrifying exploitation shockers, here’s a selection of horror movies (and a sprinkling of sci-fi) to accentuate your summer. Most films begin at dusk, with venues encouraging viewers to arrive an hour before to set up blankets or lawn chairs.

Movies Under the Stars

Outdoor movie screenings come to green spaces across the five boroughs in this summer-long series presented by the Mayor’s Office of Media and Entertainment and NYC Parks. Showing on July 22 is the 2016 reboot of “Ghostbusters,” starring Melissa McCarthy, Kristen Wiig, Kate McKinnon and Leslie Jones, in Highbridge Park in the Bronx. Seating is limited so get there early.

Pix on the Plaza

The Standard, High Line, a chic Meatpacking District hotel, has turned its open-air terrace into a summer cinema, free popcorn included. A night of nostalgia is in store for Gen Xers on July 26, when the hotel shows “The Goonies” (1985). The antic-adventure movie, starring Corey Feldman and Josh Brolin, isn’t quite in the horror category, but it will definitely keep kids — and parents — on the edge of their seats.

Movies With a View

“Grit” is the theme for the 21st season of this popular film series from the Brooklyn Bridge Park Conservancy. “Shaun of the Dead” (2004), a surprisingly tender zombie apocalypse comedy, kicks things off on Aug. 5. The movie will be shown at Harbor View Lawn, located at the highest point in Brooklyn Bridge Park, and that means fantastic views of the Statue of Liberty and downtown Manhattan. Before the movie starts at sundown, there will be music courtesy of Brooklyn Radio at 6 p.m. and a short film selected by BAMcinématek. There’s also a free bike valet and vendors from Smorgasburg.

On Aug. 20, the Garden’s movie night series — its first — will feature the animated film “Abominable” (2019), about a cuddly Yeti named Everest. In addition to after-hours access to the Garden, attendees can sample icy treats and make snowpeople-themed crafts out of botanical materials.

This Catskills drive-in, established in 1959, has become a popular spot for visitors to Greene County, about a two-and-a-half hour drive north of New York City. The summer film schedule includes a two-night stint (July 30-31) of the sci-fi meta-comedy “Galaxy Quest” (1999), starring Tim Allen, about a group of actors from a “Star Trek”-like show who are transported to outer space for an actual mission. Pair the film with concessions that include a rotation of beers from local breweries.

Founded in 1886, this Bergen County farm is known for peach picking, cake doughnuts and an annual Halloween light show. But this summer there are movies on the calendar as the venue brings back its popular drive-in theater space. The very family-friendly film lineup includes the animated comedy “Monsters Inc.” (2001), on July 16; the scarier-than-you-remember creature feature “Gremlins” (1984), on July 24; and the undead-with-a-smile teen comedy “Zombies 2” (2020), on Aug. 14.

Here’s another chance to see “The Goonies,” this time at Theodore Roosevelt Memorial Park and Beach on July 28, as part of this summer series of pop-up drive-in movie nights. Vehicles will be admitted to the parking lot on a first-come, first-served basis beginning at 7 p.m.

Adventurous programming is on the calendar for this outdoor cinema organization celebrating its 25th anniversary. On July 19, Green-Wood Cemetery in Brooklyn will show “October Country” (2010) with a live score by Michael Palmieri and Donal Mosher, a member of the troubled family featured in the 2009 documentary. On July 24, the cemetery will also present a program of eerie short films about “the living, the dead and those caught in between the two,” as the listing puts it. On July 28, the Old American Can Factory in Gowanus, Brooklyn, will play host to a free screening of the playfully dark German psychological thriller “Sleep” (2020).

This Suffolk County pop-up venue, located in a parking lot at the Westfield South Shore Mall, is heavy on horror all summer. Late-night screenings include “Us” (2019), on July 16, and “Night of the Living Dead” (1968), on July 17. There’s also a Christmas in July lineup that includes some playfully dark ones: “Rare Exports: A Christmas Tale” (2010), on July 30, about a monstrous Santa Claus; and “Krampus” (2015), on July 31, about a demonic creature who terrorizes children on Christmas. Even better: They’re shown on a 52-foot screen, the largest on Long Island.

About a 90-minute drive from New York City, this is a go-to destination for die-hard horror fans. Highlights include a deadly Christmas double feature (July 23-24) that includes the ’80s slasher films “Silent Night, Deadly Night” and “Christmas Evil,”; a 10-film, 35-mm “Schlock-o-Rama” series (July 30-Aug. 1) that includes “The Tingler” (1959) and other movies by the schlockmeister director William Castle; and Herschell Gordon Lewis’s exploitation jolter “The Wizard of Gore” (1970), on Aug. 3. Parts of the grounds are available for folks who want to set up a tent and camp overnight. In the dark. In the woods. (You’ve been warned.)