Rose McGowan has lashed out at suggestions she has turned her back on the global #MeToo movement.

Earlier this week, there were reports the actress had described elements of the #MeToo movement as "bullshit". However, the actress has since said she was referring to the actions of some in Hollywood, as opposed to survivors around the world who have shared stories of abuse and sexual harassment.

McGowan has been one of the leading figures in the #MeToo movement since The New York Times revealed last year that she had reached a $100,000 settlement with Harvey Weinstein in 1997 after an encounter in a hotel room.

She later turned to social media to claim the disgraced movie mogul had raped her and that Hollywood's "golden boys" knew about his behaviour.

Earlier this week, The Sunday Times quoted the 45-year-old as saying many who supported the #MeToo movement were actually "douchebags". "They're not champions," she said. "I just think they're losers. I don't like them. How do I explain the fact that I got a GQ Man of the Year award and no women's magazines and no women's organizations have supported me?"

When asked about Hollywood lunches she's not invited to, McGowan responded, "It's all bullshit. It's a lie. It's a Band-Aid lie to make them feel better."

The publication has since apologised for "any confusion" and confirmed that McGowan was indeed referring to people in the entertainment industry as opposed to activists and survivors of abuse. 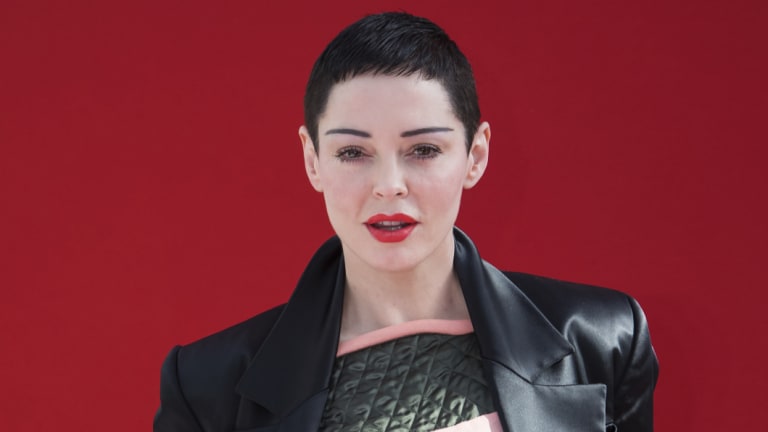 "I never said #MeToo is a lie," McGowan said on Tuesday. "Ever. I was talking about Hollywood and Time's Up. I'm so tired of erroneous shitstorms.

"#MeToo is important, it's honest and it's our experience. For some reason there are people in the media that will try to bring it down. But I say stand strong. Again, it's simply our shared experience. That is what #MeToo is. And it's beautiful."

The media storm comes after a turbulent few months for the former Charmed actor. She had a public falling out with former friend and fellow #MeToo figurehead Asia Argento after it was alleged that Argento had slept with an underage boy.

Argento is now attempting to sue McGowan over "deception" and for leaking to the media text messages that appear to show Argento admitting to intercourse with 17-year-old Jimmy Bennett.

In February, McGowan's former agent Jill Messick took her own life after a period of intense cyberbullying. McGowan had been highly critical of her former manager, even going so far as to claim she had been complicit in covering up Harvey Weinstein's assault on her in 1997.

Messick's family blamed McGowan, in part, for her death and said the former agent had supported the #MeToo movement.

Just days before Messick's death, McGowan had been promoting her tell-all book, Brave, in New York. The book signing was interrupted when a trans woman shouted that the #MeToo movement, and McGowan specifically, wasn't doing enough to support the trans community or women of colour. The fight made headlines around the world.

"What have you done for women?" McGowan shouted back. "Don't label me, sister, Don't put your labels on me. Don't you f—ing do that … Leave me alone. Step the f— back. What I do for the f—ing world and you should be f—ing grateful. Shut the f— up. Get off my back. What have you done? I know what I've done, God dammit."

Previous post Which Celebrity Pals Are Likely to Be Surprise Guests at Princess Eugenie's Royal Wedding?

Next post X-Men: Dark Phoenix cast, release date, plot and everything you need to know