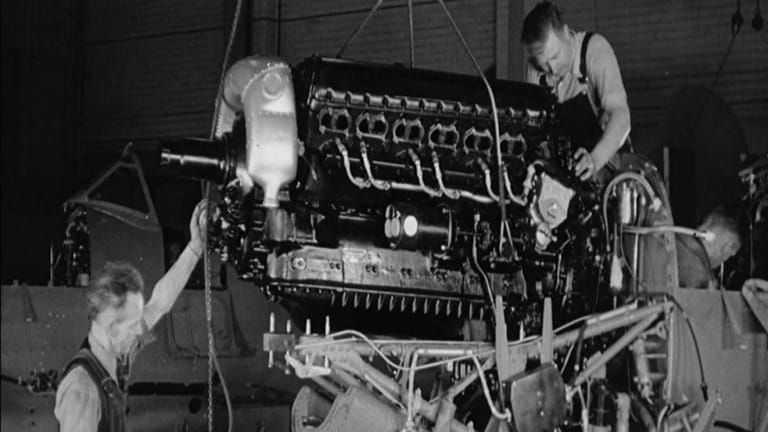 The Spitfire has become a mystical thing in Britain, for good reason.Credit:Rialto Distribution

Bloomin' marvellous, what? A real Spitfire, the famous ellipse of its wing in silhouette, tears across the sky above England's green and pleasant land. We can't hear it but it banks towards us and the sound grows, that unmistakeable chug of the stonking great Merlin engine, the sound of the Battle of Britain, coming straight at you until it makes you wince and duck your head. I say, makes you proud to be …

Which is exactly what this rousing but repetitive English documentary is meant to do: swell the same breasts that swooned over Christopher Nolan's rather literal Dunkirk, while choking back sobs for Gary Oldman's implacable, impeccable Churchill. It's springtime for patriots in Britain, if perhaps more wintry in Germany and France. But surely this is more than just a glossy Brexit airshow?

Absolutely. The lovely part is to meet the men – and one or two women – who flew them. This happy few describe the beauty of line, the ease of control, the jolt of speed, especially in the later versions (who knew there were 24 different "marks"?).

There's great old footage of the factories that made them and the design team led by RJ Mitchell in the 1930s. There's even a few scenes from First of the Few (1942), directed and starring Leslie Howard as Mitchell, puffing his pipe and looking skyward.

And the contemporary shots by specialist aerial photographer John Dibbs are superb, especially when combined with a rousing requiem-like score by Chris Roe. At least, they are the first dozen times. The effect then becomes wearing. "Spits" in the air, single, double and triple formation; Spits doing victory rolls and loops; Spits taking off and landing; Spits over Dover and Spits over Malta. Never have so few Spitfires done so many tricks for so long for so little dramatic effect, except they look lovely and they cost a lot of money so you can jolly-well like them.

A shorter, sharper, less hyperbolic, less chest-thumping film about the Spitfire might have flown further than its home audience. This one will excite the aviation and military buffs, of course. I count myself among them, but surely, there were better ways to occupy 99 minutes than with an endless fly-past?

The publicity materials say it's a film about people, not rivets, but that's not entirely true. The people take second place to the legend. The Spitfire has become a mystical thing in Britain, for good reason.

It's a marvellous and exciting story, but it's no longer just a plane. It's a symbol of British bravery, ingenuity and victory, driven by nostalgia and lately, seized upon by nationalists. The documentary stokes those emotions, when it might better have questioned them.