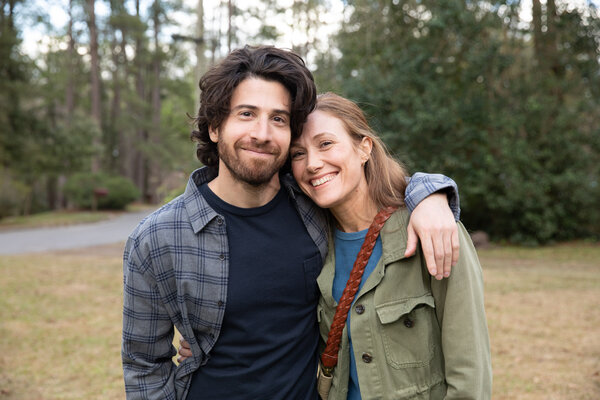 “Sam & Kate” is the kind of film in which a car breakdown kindles a romance, fireworks provide the backdrop for a first kiss and a misplaced box (almost) ends a relationship.

It’s a story about serendipity, except the signs from the universe that drive Darren Le Gallo’s film, a drama about finding love after loss, feel a little too … plotted. Twists of fate lose their magic when they’re obvious as clumsy script contrivances.

If there’s a ring of truth to the film, it’s in the casting. The movie stars two real-life parent-child pairs: Dustin Hoffman and Jake Hoffman play a father-son duo, Bill and Sam, while Schuyler Fisk and Sissy Spacek appear as Kate and her mother, Tina. Sam is an aspiring artist who has returned to his hometown to take care of the ailing, cantankerous Bill; Kate, a bookstore owner, is grieving a personal tragedy (the details are revealed gradually) and trying to manage Tina’s hoarding problem.

Sam asks Kate out and is gently turned away, but — per the fantasies of many a spurned man — he persists, and she finally gives in.

Sam and Kate are such broad archetypes that it’s hard to feel the depth of their scars or the spark of their chemistry. The younger Hoffman’s messy hair and hangdog face do little to explain why, exactly, Sam is such a sad sack. The effervescent Fisk is mostly tasked with smiling sadly — until, of course, Sam draws Kate out of her shell with his supposed charms.

The parents, however, fill out their thin roles with an authentic melancholy that “Sam & Kate” struggles otherwise to muster. Underneath Bill’s orneriness and Tina’s neuroses, one glimpses two aging actors confronting their own mortality with touching candor.