It's kismet for Elton John that Richard Madden, his newfound friend, is playing his former lover and manager John Reid, given that both hail from the same part of Scotland, Renfrewshire, outside Glasgow.

For Madden, Rocketman, a musical biopic telling Elton's life story, is his second role since playing PS Budd in the BBC's Bodyguard, where he got to go au naturale. 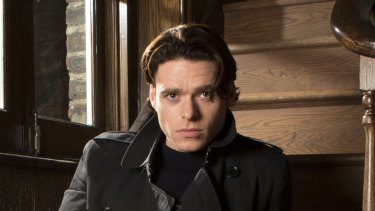 Richard Madden likes recognition for his work but not the trappings of fame.Credit:Richard Saker/Contour

Scotland has long been a fascination of Elton's. He's not alone. From Outlander to Bodyguard, Scottish heartthrobs, with their lyrical accents, are suddenly in vogue.

"Let's hope so!" laughs Madden. "I've not even used my accent for about ten years and now I can start using it a bit more, which is good.

"Rocketman was so great because I got to use my [real] accent because the character was born where I was born, so it was a natural element."

We meet early at the ultra-trendy Ham Yard Hotel, a Soho hotspot with a bar that heaves at night. Madden is seated in an armchair, alone except for a publicist who hangs out near the door for the duration of our twenty-minute chat. He flashes an enormous smile and its obvious he's not only come prepared to charm but is an experienced pro in the role.

After a decade and more of playing various incarnations of Romeo, literally twice in separate productions of Romeo and Juliet, the King of the North's Robb Stark in Game of Thrones and as the eponymous Lady Chatterley's lover Oliver Mellors in a 2015 BBC movie adaptation, just to name a few, Maddden says he relished the opportunity of playing Reid – and getting "be a c**t".

"I've not been to Australia. I'd love to go to Australia, I'm dying to go to Australia," says Madden. The actor was unable to meet Reid, who is now retired and living in Australia, in preparing for the role. But he was able to rely on his own growing fame, which allowed him to consult widely with Reid's one-time friends and associates to find out more about a man who is "very hard to find out lots about". 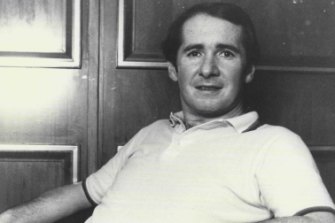 "Donatella Versace was telling me stories about him," he begins. The name-drop tumbles out nonchalantly, as does his confession later in the interview that he might be too busy to make the (upcomimg at the time of this interviews) Game of Thrones final season premiere in New York.

"You've got some people that are absolutely terrified of him because he's this man who loves to fire people and there's this force, and then other people saying he is the most fun person you could possibly get and if you get a night out with John Reid, you're going to have the best time.

"It gave me liberty to play lots of different elements of him. This man that people love being around but also this man that people are absolutely terrified of; I got to play with the spectrum of that because of all these different anecdotes I got. I could kind of build my own picture that was going to be useful to the script and build it with the film and bring it out where we needed to." 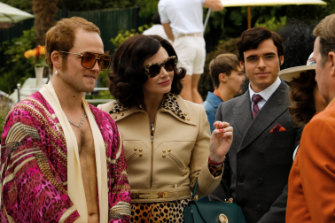 It is the second time in as many years John Reid will be depicted in a music biopic and the second time by a Game of Thrones star. Last year, Irish actor Aidan Gillen, who plays Throne's Machiavellian villain Littlefinger, played Reid – also a former manager of the band Queen – in Bohemian Rhapsody.

There's no doubt that Bohemian Rhapsody's revival of the genre to stunning success at the box office and last year's Academy Awards has tilled fertile ground for Rocketman's likely success.

"There's a real appetite for these films, these films that incorporate music and these biopic films," agrees Madden.

While the two films share the same director, Dexter Fletcher (who stepped in to replace Bryan Singer when he was hit by sexual assault allegations) Madden cautions about drawing too many parallels between the two movies. "Our film is very, very different to what Bohemian Rhapsody is, which is thrilling.

"I think we've got something really special; ours is less of a straightforward biography because we've got such creative licence with where we go in this."

"There's some really out-there scenes and it's abstract and heightened in a way that I don't think Bohemian Rhapsody was. It was a different kind of film.

"So we really get to explore the different kinds of colours and abstract sequences that take these songs on a different journey.

"And it's also Taron's interpretation. He's playing Elton, he's interpreting. Taron sings the whole way through the movie and plays the piano."

While Madden may have enjoyed the luxury of deploying his Scottish accent, less comfortable was having to sing, an experience he describes as "terrifying, very exposing and frightening".

He comes prepared with a well-used self-deprecating joke: "Thank God for autotune!"

Madden admits to being curious as to what Reid makes of his portrayal, something the largely reclusive Reid may never make known. Elton's verdict, however is in. 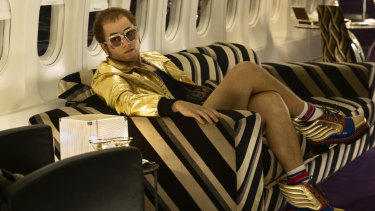 "Taron plays him so brilliantly and I spoke to Elton about it the other day and he's seen bits of it and he said it's very strange watching himself because Taron does things, ticks or little movements with head or eye gestures that are, like, 'wow' that is Elton, he's nailed it,'".

Elton told Madden in an interview the pair did recently for Interview Magazine that while Egerton is "eerily like me" he had to "disconnect" from the film because it's not "factual." "It’s actually a surreal version of my life, a fantasy," John told Madden recently.

Despite their 40-year age gap, Elton and Madden struck up a friendship through the film. Madden says he got to know both Elton and his husband, David Furnish, well.

But the Egerton's Elton is not the 72-year old Madden knows and loves. "He's a very different man I suppose. But he's definitely got elements of that original, the Elton that we get to know in the film."

And that, he says, is primarily what Rocketman is about – getting to know Elton – "this Reginald Dwight who turns into Elton Hercules John."

"You're getting to see what formed him, what made him in the spirit that pushes through and his talent that takes him on this wild journey and all the kind of pitfalls and successes, the good and bad things that come from it."

Fame isn't something that I would wish on anyone.

The parallels are obvious. With a Golden Globe, 2.3 million followers on Instagram and a possible second-season of Bodyguard in the works, Madden's own stardom is on the rise. Is he perched on the precipice of falling victim to fame's well-documented pitfalls: the booze, the drugs, the partying, that captured Elton for a time and has destroyed so many other stars, particularly child actors, before him?

"I've thought about that kind of thing my whole life because I was kid actor, you see, so I was kind of famous amongst my peers when I was 11, 12, 13 and went through a lot of pitfalls then of the things that happened."

"And then you know there was a different wave [of fame] after Game of Thrones, but I was much more prepared for it because I'd been through a lot when I was a child." 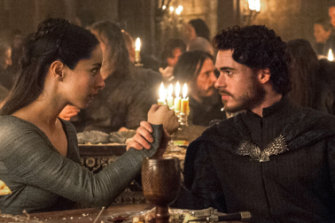 Madden is not just shy, but fiercely private and visibly bristles when I suggest that trading your personal life is part and parcel of being a modern-day celebrity actor.

His jaw locks determinedly as he rebuts the idea. "I don't think it is, I don't think it should be," he says quietly, and firmly, dropping eye-contact and looking away, the easy-going charm that's been on display throughout the interview evaporating briefly.

For a star that doesn't enjoy becoming more famous, even if it translates to bigger pay cheques – "I've yet to see that," he half-jokes – this is deliberate. The 32-year old remains close to his family, mother and father back in Scotland as well as his elder and younger sisters. He sets himself firm rules aimed at avoiding unnecessary camera-flashes.

"Don't go to celebrity nightclubs and fall out of them drunk. Don't go to certain parties [where] you're going to get photographed," he lists.

But he says there is a distinction between fame and professional recognition. The latter he welcomes, but "fame is something I wouldn't wish on anyone", he says.

"What's been really nice, can be really nice, about the Bodyguard and the recognition you get from that is people really enjoy the show and that's what's lovely, is that people just enjoy your work, which is different to being famous for the sake of it." 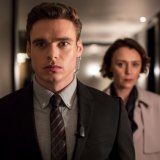 He also singles out the acclaim for Bodyguard as particularly thrilling, because of the series' relatively low budget.

"I'm thrilled with the success because we had a crew that worked so hard – everyone – 14, 15 hours a day, every day, six days a week, in the cold, in London.

"It's BBC, it's not a huge budget piece, you know, we're pulling together to do it so for that to kind of travel across the water and the world … I was just like [this is] the best possible – it was more than I could have imagined."

And he confirms, a season two of Bodyguard, although never intended, is a real possibility.

"We're talking about it. Who knows what will come, we'll see what [writer] Jed [Mercurio] comes up with but it's definitely something that's a possibility." So whether Budd would resume where we last saw him, starting treatment for his PTSD, remains an open question.

"We never intended to make a second series so it will be really interesting to see where we pick up with the character, how many years down the line is he, or is it fresh?"

While Madden is all smiles and ready charm for his interview, his underlying seriousness in the way he approaches his roles, fame and future fortune is never far from the surface. This is most apparent when I ask if he has a long-term career goal.

The recent Golden Globe winner doesn't cite an Oscar or any other such industry endorsement, but smiles and answers immediately, with a nod to where his road-to his global success began, debuting as Romeo at London's Globe theatre aged 20.

"Eventually on-stage, Willy Loman in Death of a Salesman, I'll be in my sixties by then but that's the goal."

Rocketman opens on May 30.