Emmanuelle Bercot’s drama about a man diagnosed with late-stage cancer plays like a eulogy for a nearly bygone era of French cinema and its stars. 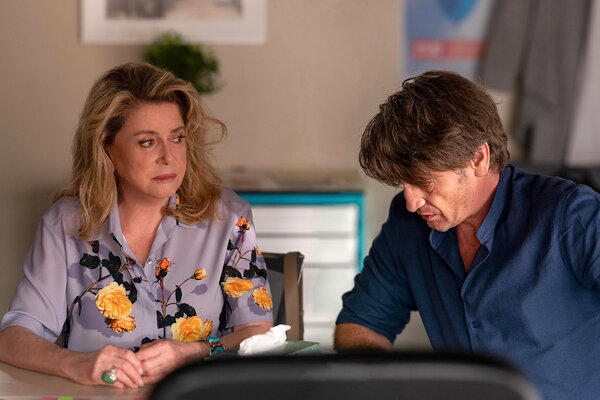 Tracing the final months in the life of an acting coach named Benjamin who is suddenly ravaged by cancer, “Peaceful,” by the French writer and director Emmanuelle Bercot, contains soap-opera levels of melodrama. It also features one too many subplots that appear out of nowhere — to frankly humorous effect — while the film’s intended comic beats often get lost in translation.

The film frequently dips into unintentional absurdity, yes, but it also captivates, thanks to the powers of the Gallic film-world heavyweights Benoît Magimel (playing Benjamin) and Catherine Deneuve.

Because of these actors, and a subtly self-reflexive script by Bercot and Marcia Romano, “Peaceful” also plays like a eulogy to a nearly bygone era of French cinema. At 48, Magimel isn’t exactly old news, but the actor, who, at the beginning of his career, starred in iconic films like “La Haine” (“Hate”) and “The Piano Teacher,” represents a kind of national stardom. The presence of Deneuve — playing Benjamin’s devastated mother, who, at one point, cradles her son like the Virgin Mary in Michelangelo’s “Pietà” — speaks for itself.

When Benjamin is informed of his late-stage cancer diagnosis, he fends off the doom and gloom by defensive sarcasm and plunging into work, instructing his pupils to re-enact scenes of difficult goodbyes and mournful departures. The cancer quickly overtakes him, and, soon enough, he’s in a hospital bed going through the various stages of grief, with anger turning into fear and, eventually, something like wizened acceptance.

Benjamin strikes up a friendship with his genial doctor, enters into a romance with another one, fends off advances from a devoted student and grapples with the guilt of abandoning his now teenage son, who shows up midway through the film. It’s a dull aside that fails to evoke any of the resonance one would expect from the arrival of a long-lost child.

Early on in the film, Benjamin asks his students to define “presence,” that slippery quality that only true stars possess. They’re unable to come up with a satisfying answer, so the camera cuts to Magimel; glowing and passionate, his face pulls us in. Moments like these make Bercot’s otherwise wobbly drama a decent attraction.

Peaceful
Not rated. In French, with subtitles. Running time: 2 hours 2 minutes. In theaters.