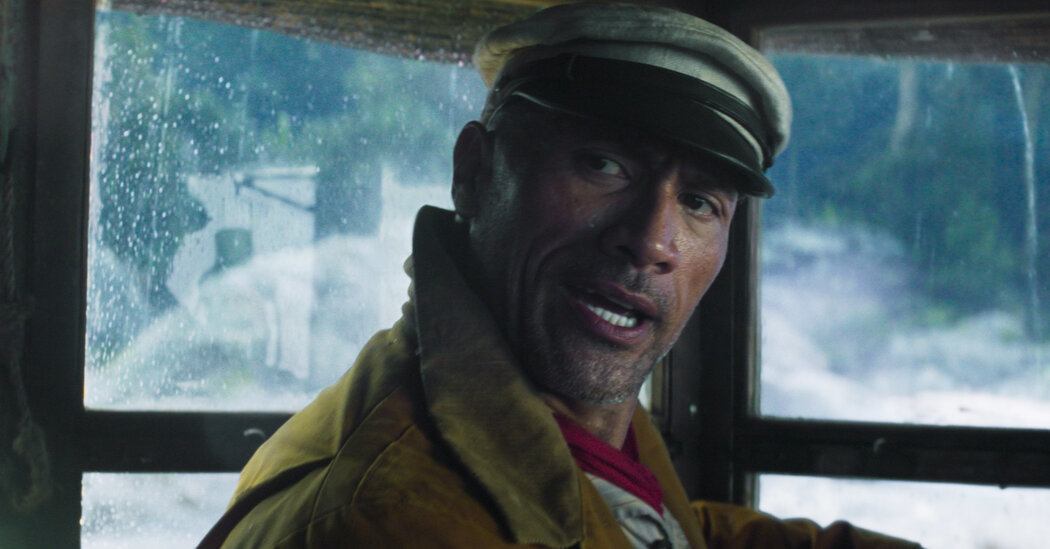 In 1916 Brazil, Skipper Frank Wolff runs the cheapest jungle cruise on the Amazon. And undoubtedly the cheesiest, as he introduces tourists to the river’s wondrous sights with a spiel overflowing with doozies.

“If you look to the left of the boat, you’ll see some very playful toucans. They’re playing their favorite game of beak-wrestling. The only drawback is, only two can play.”

“The rocks you see here in the river are sandstone. But some people just take them for granite. It’s one of my boulder attractions.”

And the highlight of the tour: “Ladies and gentlemen, get ready for the eighth wonder of the world,” he says, building toward the climax, as his rickety steamboat passes behind a makeshift waterfall. “Wait for it … the backside of water!”

Frank’s guests may groan and roll their eyes at his droll banter in Disney’s “Jungle Cruise,” starring Dwayne Johnson as the swaggering skipper and arriving July 30 on Disney+ and in theaters. But the skippers and their spiels — corny jokes and bad puns, the cringier the better — have been the real stars of the Jungle Cruise attraction since the first one opened at Disneyland in 1955. Take them away and the seven-minute fantasy boat trip along rivers in South America, Asia and Africa, inspired in part by “The African Queen,” might be just another ride down a fake waterway with fake scenery.

It’s also one of the rare performing jobs at a Disney theme park where the skippers can weave their own personalities into the script — from dry and geeky to animated and flamboyant — and get guests in on the action. “It’s this alchemy that happens” that few attractions can replicate, said Alex Williams, a former skipper who now works for the Disney fan club D23.

With the new movie as well as the ride’s freshly reimagined story line, the Jungle Cruise is in the spotlight now, and no one is feeling it more than the skippers themselves.

“We’re all just really excited about being able to share this experience with everyone and being the inspiration for the movie,” said Flor Torres, a “lead” on the attraction.

“Once a skip, always a skip.” That’s the motto of skippers who’ve held a job requiring them to maneuver a boat while performing a stand-up routine dozens of times across an eight-hour day.

“People really take that to heart,” Torres added of the motto. “I know skippers that have worked here maybe 20, 30 years ago, and they still come by and talk to us like they were just here yesterday.”

A handful have wisecracked their way to bigger stages, like Ron Ziegler, the White House press secretary for President Richard M. Nixon; the filmmaker John Lasseter; Steve Franks, a screenwriter and the creator of the TV series “Psych”; and, it’s said, the actor Kevin Costner. (Alas, stories that Robin Williams and Steve Martin honed their humor at the helm are apparently only myths.)

Other former skippers have recounted their experiences on podcasts like “Tales From the Jungle Crews” and “The Backside of Water,” or provided pandemic uplift in Freddy Martin’s “World Famous Jungle Cruise” video and its sequel.

And a bold few have revealed some not-Disney-approved antics in books like “Skipper Stories: True Tales From Disneyland’s Jungle Cruise,” a compilation of six decades of anecdotes from former skippers, including the author, David John Marley.

To wit: The ritual of becoming a “real skipper” by peeing in the river at night. The Jungle Justice inflicted on skippers who abused their break time (they found themselves suddenly scheduled for upward of 90 minutes of nonstop cruises without water or a bathroom stop). The off-hours party where $2,000 was spent on alcohol and condoms.

A good skipper is an extrovert, a nut and somewhat of a rogue. At least that’s how Bill Sullivan, who joined the Jungle Cruise in 1955, once put it. His own skipper colleagues included a man who arrived one morning with chameleons around his neck.

They didn’t have much of a script in the beginning so the men wrote their own, Sullivan, who eventually became vice president of the Magic Kingdom, recalled in 2008. (Women didn’t become skippers until the mid-1990s.)

The spiel had been repeatedly fine-tuned by the time Franks landed his gig in the late 1980s. And venturing from it was ill-advised.

“You would hear these stories about supervisors hiding in the jungle, listening for people going off-book, but if that was true, they would have canned me on Day 2,” he said. “I knew I wanted to make movies, and I was doing stand-up at the time. And as soon as we got around the first corner, I was working in material.”

Franks stayed at Disneyland for eight and a half years, writing the script for Adam Sandler’s “Big Daddy” while monitoring the Enchanted Tiki Room.

Crews may have been rowdier back in the day, but “today we’re much more conservative, a little less the Wild West,” said Kevin Lively, one of two skippers chosen to represent Disneyland at Tokyo Disney Resort’s 25th anniversary celebration in 2009. (There’s also a Jungle Cruise at Walt Disney World and Hong Kong Disneyland.)

Lively now works as a Disney Imagineer, developing skipper spiels and contributing “gnu” magic to the attraction, which has replaced racist elements like spear-throwing African “headhunters” with a story about Felix Pechman XIII, “the unluckiest skipper on the dock.”

And when the “Jungle Cruise” movie needed an injection of humor, Lively was on it.

“I shotgun-blast puns and references and Easter eggs to them, and let them kind of just run amok,” he said. “There’s stuff in there that I think all these skippers will get, which just makes me over-the-moon happy. They really showed their love of the attraction in that film.”

Skipper Frank’s ersatz Amazon tour wasn’t in the original script, said Jaume Collet-Serra, the movie’s director. But once the filmmaker had ridden the actual Jungle Cruise and witnessed reactions to that “backside of water” joke, he knew what he had to do.

Treat the audience to a mini-Jungle Cruise experience.

“I was like, let me give them what they want for two minutes and then I’ll give them more, but at least they’ll be happy early,” he said. “You know, ‘Here is what you came for — now let the movie begin.’”