In this thriller based on a Stephen King story, a lonely student and a lonelier old man make a connection that persists, even after death. 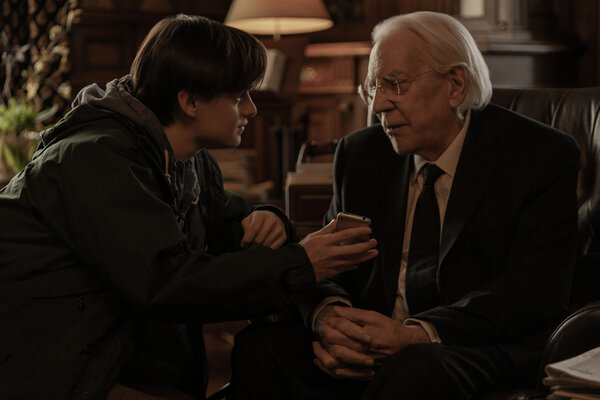 With its curmudgeonly swipes at digital technology, there’s something mildly “get off my lawn!” about “Mr. Harrigan’s Phone.” Based on a Stephen King story, the John Lee Hancock movie tells the story of a teenager who appears to receive calls and texts from his mysterious former employer, Mr. Harrigan, who has recently died.

Donald Sutherland portrays the reclusive billionaire who hires Craig (Jaeden Martell) to come to his mansion on the outskirts of their Maine town and read to him after school. Craig’s father (Joe Tippett), although not a fan of Harrigan, trusts his son’s moral compass. Whether it will maintain its true north is one of the movie’s intriguing tensions.

There’s a bittersweetness to Craig and Harrigan’s friendship and good chemistry between the leads. It’s as if Mr. Potter from “It’s a Wonderful Life” found some nice local kid who had no idea about his mentor’s Bedford Falls history. The analog world, with its hard-bound literature and daily papers, is fundamental in this parable about the lure of digital technology.

When Craig enters high school, he becomes the target of a bully, makes friends and finds a champion. The actor Kirby Howell-Baptiste provides a beam of light and the voice of caution as Craig’s science teacher, Ms. Hart. At the same time, the iPhone is making its debut as a must-have status object. With an unexpected windfall, Craig buys one for his old friend.

When Harrigan suddenly dies, Craig is shaken. What happens next makes the movie less a chiller than a diverting drama about technology with things that go bump in the night, along with some nicely apt ethical quandaries for Craig — and for us.