Is there really an all-female Marvel movie in the works? It seems there might be, since Brie Larson and several other female MCU cast members recently discussed the possibility with studio boss Kevin Feige, who is reported to fully support the idea.

Larson, who plays Captain Marvel in the franchise, is adamant about her desire for an all-female superhero movie. So is Scarlett Johansson, who plays Black Widow in the wildly popular MCU.

Larson is a champion of having more women in pivotal movie roles. In fact, her passion for it might even have gotten her the role of Captain Marvel in the first place.

She also acted as a real-life superhero when she shared the glory with her two female stunt doubles at the MTV Movie & TV Awards, where she won an award for “Best Fight.”

Looking behind the scenes 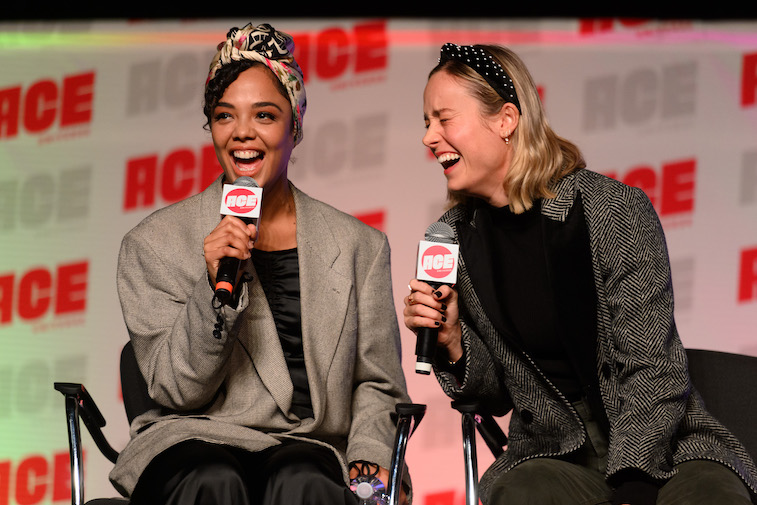 Marvel may be easing into the idea of a female-centric superhero movie by starting behind the scenes. The first female MCU director ever was Anna Boden, who co-directed Captain Marvel along with Ryan Fleck.

Now two other female directors are set to take their shot at a Marvel film. Cate Shortland will direct Black Widow while The Eternals will be directed by Chloe Zhao.

According to fans, this Avenger is essential to an all-female movie

Wanda (aka the Scarlet Witch) was recently chosen as the fandom’s favorite female MCU character. When it comes to discussing an all-female movie, fans are adamant that she is the one character they want to see the most.

They admire her power and strength and think she doesn’t get nearly enough respect. If she plays a leading role in this much-hoped-for movie, that will surely change.

It might be in Marvel’s best interest to give her more of a starring role in this potential movie. After all, they’re putting a lot of money, time, and creative effort into WandaVision, her new Disney+ series. A big role in the movie would surely support those efforts.

What is the A-Force, anyway? It appeared briefly in the Marvel Comics, but the idea of a movie featuring it was inspired by a shot of the final battle in Avengers: Endgame. That shot showed a group of female heroes backing up Captain Marvel.

As brief as it was, it inspired a desire by Marvel fans and the women portraying those superheroes to see more. Thus the resurgence of the A-Force!

Of course, every fan is going to have their own idea of the perfect A-Force team. The most important thing to most of them, though, is to have some kind of all-female superhero movie.

If Marvel is smart, they’ll listen to their fan base and give them the A-Force superhero movie they’re demanding.

There’s competition on the way

DC Extended Universe (DCEU) has already beaten MCU to the punch since Wonder Woman became the first really successful superhero movie with a female lead. It was about time for MCU to follow when they finally released Captain Marvel.

Now Marvel might want to jump on the idea of the A-Force, considering that DCU is set to release Birds Of Prey soon.

The movie will feature a cast of all-female superheroes saving a very young girl named Cassandra Cain. That’s right, the one who grows into the role of Batgirl. Talk about female superheroes!

Unusually for a superhero movie, Birds of Prey has an R-rating. That might make a family-friendly MCU female superhero movie even more popular. But Marvel will have to approve the movie soon if they want to benefit from the contrast.