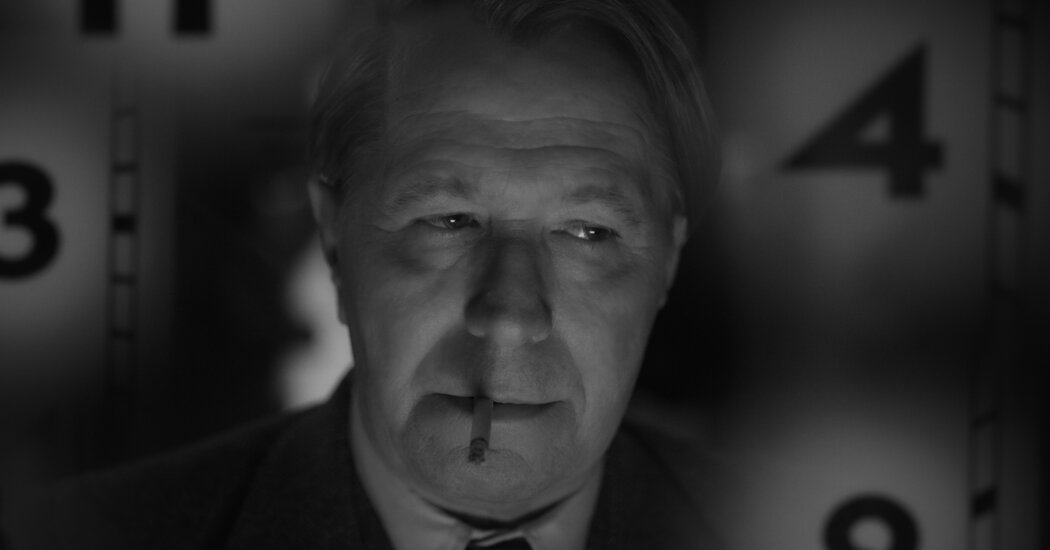 Here’s what you need to know:

Are you ready for awards season to start? We are.

The Golden Globes have always been a peculiar ritual. The statues are awarded by a clandestine group of foreign journalists, only 89 of whom vote. Top prizes are split into dramatic and comedic categories, often in confounding ways. Rather bizarrely, foreign-language films are not allowed to compete for the most prestigious awards.

This year, however, the surreal nature of the affair has been heightened by a pandemic-era question: The Globes are actually happening?

Almost every film in contention has been released online or is still awaiting release. Many cinemas have now been closed for 11 months.

The black-and-white “Mank,” a tale of Old Hollywood, led the nominations with six, including one for best drama. It will compete against “The Trial of the Chicago 7,” “Nomadland,” “Promising Young Woman” and “The Father.” The inclusion of “Promising Young Woman,” about a traumatized revenge seeker, was a surprise. Shut out of the best drama race was the Netflix critical favorite “Ma Rainey’s Black Bottom,” although Globes voters recognized it for acting, including the lead performances by Chadwick Boseman and Viola Davis.

Competing for best comedy or musical of the year will be “Borat Subsequent Moviefilm,” “Hamilton,” “Palm Springs,” “The Prom” and — out of nowhere — “Music,” a coming film by Sia about a young woman on the autism spectrum. Sia’s film, which has been contentious in the autism community, focuses on a low-functioning autistic teenager being cared for by her newly sober, drug-dealing sister (played by Kate Hudson, who was nominated for best actress in a comedy or musical).

The notable acting nominees included the fast-rising Anya Taylor-Joy, who was honored in the film categories for “Emma” and on the TV side for “The Queen’s Gambit.” Sacha Baron Cohen was also a double nominee, recognized for “Borat Subsequent Moviefilm” and “The Trial of the Chicago 7,” two polar-opposite roles.

For a lot of people, including some in Hollywood, it is hard to care about little golden trophies at a time when the coronavirus is still killing more than 1,000 Americans a day. Others will undoubtedly welcome the Golden Globes as a silly distraction — the reliable balm of celebrity self-involvement and did-you-see-that-ugly-outfit schadenfreude.

Amy Poehler and Tina Fey will return as hostesses. The ceremony is planned for Feb. 28 and will be shown on NBC.

The Globes ostensibly exist to honor excellence in movies and television. But the real reason this show must go on involves money. NBC pays the Hollywood Foreign Press Association and its producing partner, Dick Clark Productions, an estimated $65 million a year for broadcast rights. About 18 million people tuned in last year.

Globe nominations are coveted marketing tools; studios and streaming services will quickly roll out expensive ad campaigns based on the tallies. For the first time since the pandemic began, moviedom will have a national platform to use as a pep rally: “I’m Still Here!”

The Globes may also help steer an adrift Oscar race onto some kind of course. (The Oscars are planned for April 25.)

In truth, the Globes are not predictive of much. Over the last 20 years, the Globes and the Oscars have agreed on best picture winners 50 percent of the time. Last year, Globe voters chose “Once Upon a Time … in Hollywood” and the war drama “1917” as best in class. Neither won at the Academy Awards, which recognized the genre-busting “Parasite.”

In keeping with its rules, the group did not nominate “Parasite,” a foreign-language film, for a best picture Globe.

Netflix, only a competitor on the movie side of the Globes since 2016, dominated to a jaw-dropping degree, stacking up 42 combined nominations — and that was without its newest episodic hit, “Bridgerton,” receiving a single mention. Among companies, WarnerMedia was second, with 13 nominations, including seven for HBO and two for HBO Max.

Netflix has homegrown films in contention (“Mank,” “The Prom”) as well as films that it bought from pandemic-stricken traditional studios, specifically Aaron Sorkin’s “The Trial of the Chicago 7.” Among the television categories, the streaming service has established crowd pleasers (“The Crown,” “Ozark”) and shiny, new hits (“The Queen’s Gambit.”) In a surprise, “Ratched,” a “One Flew Over the Cuckoo’s Nest” prequel series from Ryan Murphy, received three nominations, including one for best television drama.

Amazon received 10 nominations, with Regina King’s “One Night in Miami,” a fact-based drama about a meeting of four Black luminaries, picking up nods for best director, song and supporting actor (for Leslie Odom Jr., who plays Sam Cooke). And Globe voters honored “Borat Subsequent Moviefilm,” which arrived on Amazon Prime Video in October, in the best comedy or musical category, among others.

Three women, including Regina King, are nominated for best director.

The Hollywood Foreign Press Association has come under attack in recent years for failing to pay attention to inclusion and diversity. At the most recent ceremony, for instance, the group put forward — yet again — an all-male slate of directors, failing to nominate women like Greta Gerwig (“Little Women”) and Olivia Wilde (“Booksmart”).

It was very different this year. King, Chloé Zhao (“Nomadland”) and Emerald Fennell (“Promising Young Woman”) were recognized. Joining them was David Fincher (“Mank”) and Aaron Sorkin (“The Trial of the Chicago 7”). Left out was Spike Lee for “Da 5 Bloods.” The war drama generated a strong critical response, and Lee has been nominated three times before by the group (most recently for directing “BlacKkKlansman”).

And, this year, his children, Satchel and Jackson, will serve as Golden Globe Ambassadors, a job that traditionally involves escorting winners off the stage.

The best actor in a drama category reflects a broad range of talents, with Chadwick Boseman (“Ma Rainey’s Black Bottom”), Gary Oldman (“Mank”), Riz Ahmed (“Sound of Metal”) and Anthony Hopkins (“The Father”) all nominated. In a surprise, Tahar Rahim, best known for his role in the French film “A Prophet” and the Hulu series “The Looming Tower,” nabbed a slot for his performance as a Guantánamo Bay inmate in “The Mauritanian.”

The TV supporting actress category, as usual, had a plethora of candidates, adding a mini-modicum of suspense. Voters made room for both Gillian Anderson and Helena Bonham Carter from “The Crown.” Also vying are Annie Murphy (“Schitt’s Creek”), Cynthia Nixon (“Ratched”) and Julia Garner (“Ozark”). Garner won an Emmy last year for her performance.

Proving yet again that there is no longer a dividing line between film and television actors, Olivia Colman joined Taylor-Joy in being nominated for both mediums. Colman, a three-time Golden Globe winner, racked up nods for both “The Crown” and her supporting role in the feature drama “The Father.”

It wouldn’t be the Globes without a foreign-language film kerfuffle. This time, the group has egg on its face because Lee Isaac Chung’s “Minari” has to compete as a foreign-language nominee — even though Mr. Chung is an American director, the movie was filmed in the United States, it was financed by American companies and it focuses on an immigrant family pursuing the American dream.

But the characters in “Minari” predominantly speak Korean. As a result, Globe rules require its banishment to the best foreign-language film race; it cannot be considered for the top prize. The cast of “Minari” was eligible for acting nominations but received none.

“Hamilton,” on the other hand, benefited from the group’s rules. As a recorded stage performance, “Hamilton” is not eligible for the Oscars. But the H.F.P.A. has no such hangup. Lin-Manuel Miranda’s musical received a nod for best musical or comedy nominee, while Miranda was nominated for best actor in a musical or comedy.