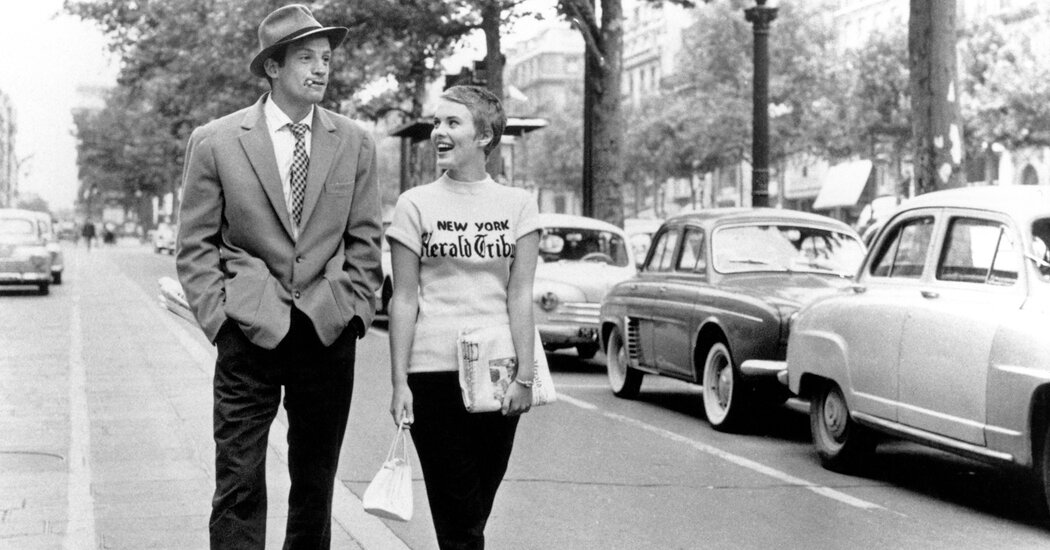 Jean-Paul Belmondo, the rugged actor whose disdainful eyes, boxer’s nose, sensual lips and cynical outlook made him the idolized personification of youthful alienation in the French New Wave, most particularly in his iconic performance as an existential killer in Jean-Luc Godard’s “Breathless,” died on Monday at his home in Paris. He was 88.

His lawyer, Michel Godest, confirmed the death in an interview on the French television news channel BFM. No cause was given.

Like Humphrey Bogart, Marlon Brando and James Dean — three American actors to whom he was frequently compared — Mr. Belmondo established his reputation playing tough, unsentimental, even antisocial characters who were cut adrift from bourgeois society. Later, as one of France’s leading stars, he took more crowd-pleasing roles, but without entirely surrendering his magnetic brashness.

Like Bogart, Mr. Belmondo brought craggy features and a seething anger to the screen, a realistic counterpoint to more classically handsome romantic stars. Like Dean, he became one of the most widely imitated pop culture figures of his era. And like Mr. Brando, he was often dismissive of pretentiousness and self-importance among filmmakers.

“No actor since James Dean has inspired quite such intense identification,” Eugene Archer wrote in The New York Times in 1965. “Dean evoked the rebellious adolescent impulse, as fierce as it was gratuitous, a violent outgrowth of the frustrations of the modern world. Belmondo is a later manifestation of youthful rejection — and more disturbing. His disengagement from a society his parents made is total. He accepts corruption with a cynical smile, not even bothering to struggle. He is out entirely for himself, to get whatever he can, while he can. The Belmondo type is capable of anything.”

His leading role in “À bout de souffle” — released in the United States in 1961 as “Breathless” — was instantly recognized as trendsetting, and subsequent imitators only cemented its importance. Mr. Belmondo’s mop of unruly hair, the way he peered at the world through a twisting web of cigarette smoke and the way he obsessively massaged his thick, feminine lips with his thumb were so vivid and evocative that they quickly became global signposts of rebellion.

Mr. Belmondo was 28 and Mr. Godard was 26 when “Breathless” was being made. The film was based on an idea by François Truffaut, another icon of the nouvelle vague, and began shooting in Paris without a script. Mr. Godard used a hand-held camera — except in the street scenes, when he would sometimes mount the camera on a borrowed wheelchair — and let everyone improvise. The resulting film was rough and ill-shaped, but it had a sense of emotional honesty and verisimilitude that made it electric. Many mainstream critics seemed unsure what to make of it.

Bosley Crowther wrote in The New York Times: “It goes at its unattractive subject in an eccentric photographed style that sharply conveys the nervous tempo and the emotional erraticalness of the story it tells. And through the American actress, Jean Seberg, and a hypnotically ugly new young man by the name of Jean-Paul Belmondo, it projects two downright fearsome characters.”

Many critics found Mr. Belmondo’s amoral antihero a little too strong. But others found in the role a raw truthfulness and a thematic boldness at odds with the bulk of what was coming out of the Hollywood studios.

Mr. Belmondo quickly followed up “Breathless” with a series of celebrated turns for other New Wave directors, and soon was widely seen as the movement’s leading interpreter — although in later years he told interviewers that he found some of the most intellectually ambitious efforts to be boring.

When he starred as a steelworker opposite Jeanne Moreau in the director Peter Brooks’ “Moderato Cantabile” (1960), he said the script by Marguerite Duras was too intellectual for his taste. He frequently expressed ambivalence about working for esoteric directors like Mr. Brooks, Alain Resnais and Michelangelo Antonioni.

By the mid ’60s, though, he was chafing at playing the youthful antihero in film after film.

“Lots of times, I’d be out with a chick and some kid would want to give me a bad time,” Mr. Belmondo told an interviewer. “I used to fight it out with them. It’s the same now. Everyone wants to say he’s flattened Belmondo.”

The turning point came for him in Philippe De Broca’s “That Man From Rio” in 1964, an over-the-top spy thriller that played like a parody of James Bond. Audiences loved it, and they loved Mr. Belmondo in it. More important, Mr. Belmondo loved doing it. Although some critics who revered the more difficult work of the French New Wave derided Mr. Belmondo as a sell out, he told interviewers that this film remained his favorite.

Later in his career Mr. Belmondo professed an unpretentious modesty, shrugging off his success, but at his box-office height in the 1960s, he was anything but modest. In an interview with the film critic Rex Reed in 1966, he all but sneered at American fans who were lining up to see his movies.

“I do not blame them,” he said, puffing on a cigar and stretching out his long legs underneath a table at Harry’s Bar in Venice. “I am worth standing in line to see.”

There were already rumors by this time that Mr. Belmondo, despite having been married since 1955 to Elodie Constantin, a former ballerina, was involved with other women. When Mr. Reed asked him about this, he shrugged that off, too.

“Listen, I am only 32 years old,” he said. “I’m not dead. And please remember, I am French. I am happily married this year, but next year? Who knows?”

A year later, his marriage had ended in divorce. Mr. Belmondo had three children. The eldest, Patricia, died in a fire in 1994 but his younger daughter, Florence, and a son, Paul, survived him.

The breakup with Ms. Constantin was rumored to be the result of a romance with one of his co-stars, Ursula Andress. Mr. Belmondo and Ms. Andress did have a long-term public relationship after the divorce. Later, he had a romance with another actress, Laura Antonelli. But not until 2002, when he was 70 years old, did he marry again, to 24-year-old Nathalie Tardivel, who also survives him along with their daughter, Stella.

Jean-Paul Belmondo was born on April 9, 1933, in the middle-class Parisian suburb of Neuilly-sur-Seine. His family moved to the city’s Left Bank when he was a boy, and he grew up in the neighborhoods around Montparnasse and Saint-Germain-des-Prés. His father, Paul Belmondo, who was born in Algiers to a family of Italian origin, was a highly regarded sculptor. He later told interviewers that his son had been a tempestuous boy who had gotten into frequent scraps and did poorly in school.

The boy’s mother, Madeline Rainaud-Richard, pushed him to do better, he later remembered, but he resisted. Finally, he dropped out of school altogether as a teenager. At 16, he became an enthusiastic amateur boxer (although his famous smashed nose came not from an organized bout but from a playground dust-up), giving it up only when he turned to acting.

“I stopped when the face I saw in the mirror began to change,” he said.

For several years, until he was 20, his parents paid for lessons at a private conservatory. After a six-month military tour in Algeria, he returned to Paris in 1953 and was accepted into the Conservatoire National d’Art Dramatique, where he studied for three years. The school didn’t know what to do with the insolent young man who sauntered onto the stage in a Molière play with his hands in his pockets.

When, at his graduation, in 1956, Mr. Belmondo was awarded only an honorable mention by his teachers, the other students hoisted him on their shoulders and carried him from the theater as he flashed an obscene gesture at the judges.

For all his flamboyance and occasional fistfights, Mr. Belmondo was said to be a consummate professional on the set. Although in later years he continued to work now and then with the great directors of the New Wave — most notably with Mr. Truffaut in “Mississippi Mermaid” (1969) — most of his energies went into mainstream favorites. Many of his films after the mid-1960s were made by his own production company.

More and more Mr. Belmondo became known for popular adventures — usually comic thrillers — and was famous for the elaborate stunts in which he took great pride in performing himself. He hung from skyscrapers, leapt across speeding trains, drove cars off hillsides. Co-stars said he seemed all but fearless. While shooting one scene in South America, he was warned that a river, into which he was about to plunge for a scene, was filled with poisonous snakes and piranha. Mr. Belmondo grabbed a chunk of corned beef and slung it into the murky water. When nothing happened, he jumped in and filmed the scene.

Finally, an injury during the filming of “Hold-Up” in 1985, when he was 52, forced him to leave the stunts to the stunt men.

Throughout, the Belmondo cult endured, though more in France than around the world. His French fans knew him by his nickname, Bebel (pronounced bay-BELL).

No matter the scene, no matter the co-stars, whatever over-the-top mayhem was breaking out, Mr. Belmondo was always able to affect a calm, cool remove, as though he was more amused than aroused by the activity swirling around him. He brought a touch of comedy to his action roles and a hint of danger to his comic roles; one could well imagine him, for instance, playing the reluctant, wisecracking hero in American action series of the 1980s like “Die Hard.”

Mr. Belmondo never made the transition to Hollywood, largely because he didn’t want to. “Why complicate my life?” he said. “I am too stupid to learn the language and it would only be a disaster.”

In 1989, Mr. Belmondo was awarded the Cesar Award for best actor, the French equivalent of the Oscar, for his performance in Claude Lelouch’s “Itineraire d’un enfant gate,” playing a middle-aged industrialist who fakes his death and then sails the world.

By this time he had slowed his frenetic pace, making only nine movies in the 1980s, compared to 41 in 1960s and 16 in the 1970s. He cut back even more in the ’90s, when he made only six films, but this was due in part to a belated career shift. Mr. Belmondo had not appeared in a live production since 1959 when he returned to the theater in 1987. Particularly well-regarded was his sold-out run as “Cyrano de Bergerac” in Paris in 1990.

A stroke in 2001, however, forced him to stop working. Not until eight years later was be back before the cameras, shooting “Un homme et son chien” (“A Man and His Dog).” Released in 2009, it tells the story of an older gentleman who suddenly finds himself (and his loyal dog) without a home.

Late in life, when he was a little thicker and much grayer, Mr. Belmondo liked to affect some of the self-effacing modesty that was noticeably absent when he was at his peak in the 1960s.

When an interviewers asked him to explain his enduring popularity, especially with women, Mr. Belmondo responded with his usual casual shrug.

“Hell, everyone knows that an ugly guy with a good line gets the chicks,” he said.