A new Incredibles 2 deleted scene has finally revealed what went down during Jack-Jack’s overnight visit with Edna.

The Pixar sequel was released on Blu-ray and DVD on Monday (November 12), and it came with a whole host of DVD extras, including deleted scenes and even a mini-movie with Edna Mode herself. 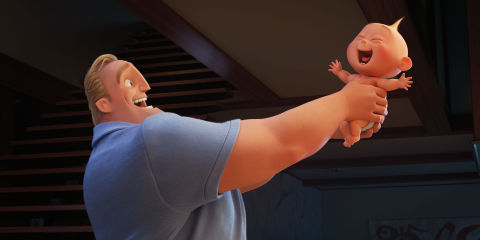 Yes, one of the extras on the home release is an ‘Auntie Edna’ mini-movie, which details what happens when Bob Parr visits super-suit designer Edna Mode looking for help with his high-energy toddler Jack-Jack, and Edna pulls an all-nighter designing a suit to harness the baby’s seemingly limitless powers.

And of course, we all know that Edna Mode only designs fabulous things, darling, as you can see in the clip below:

The minute-long clip finally allows fans to see some of what went down between Jack-Jack and Edna while he stayed in her mansion — and the multi-talented baby was surprisingly well-behaved.

Ahead of his father’s return and after a montage of Edna designing the baby super-suit, Jack-Jack can be seen modelling his superhero suit to a very-impressed aunt Edna, who proceeds to act the way most adults do around babies.

“Yes, you are a tiny god,” she tells Jack-Jack, who chuckles in response.

The clip and mini-movie are just part of the many extras on offer with The Incredibles 2 DVD and Blu-ray release.

Alongside the mini-movie, we also get 10 deleted scenes, outtakes, a commentary, and several features – including a “documentary/hiphop music video hybrid” detailing the emergence of Jack-Jack’s powers.

And, of course, we’ll also get to the complete video of the incredibly cute short, Bao – as well as a featurette of director Domee Shi explaining the making of Bao too.

The Incredibles 2 is out on Blu-ray and DVD now.