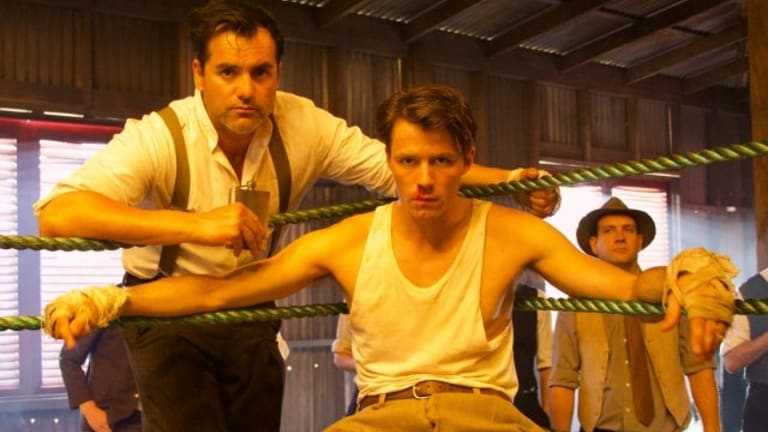 Corey Large (Rex) and Thomas Cocquerel (Errol Flynn) in a scene from In Like Flynn.

In 1937, the Australian-born Hollywood star Errol Flynn wrote Beams End, a rollicking account of his youthful Coral Sea adventures with three friends aboard Sirocco, a 12-metre yacht that was never meant to sail beyond Sydney Harbour's headlands.

The book's tone was an engaging blend of artful self-deprecation and gleeful exaggeration. Flynn was exulting in his growing reputation as a gentlemanly hell-raiser, while taking care to do it with charm.

Describing Sirocco's 5000-kilometre voyage from Sydney to Papua New Guinea, he wrote: "The only truly remarkable thing about our seamanship was our appalling lack of it … my calculations of our position would, as often as not, locate the ship anywhere from the South Pole to the middle of the Sahara Desert".

Australian action director Russell Mulcahy (Resident Evil: Extinction) has produced a rough screen translation of these reminiscences but little of Flynn's insouciance has made the cut. The film plays like an old-fashioned Hollywood B-picture with a bland hero, lots of drinking and brawling and a lot of over-acting. David Wenham, who's cast as corrupt North Queensland mayor and all-round conman met en route, does all but twirl his moustache in the manner of a Victorian villain.

The film begins in Papua New Guinea, where the script takes off from Flynn's brief mention of two years of gold prospecting and confects an encounter with a tribe of cannibals. Flynn is escorting a couple of fictitious Hollywood producers who are scouting locations, and their appreciation of his heroics will later result in movie offer. It's a version of his career that neatly excises his 1933 role as Fletcher Christian in a Charles Chauvel film, In the Wake of the Bounty, plus two years working as an actor in Britain, but that's the least of the script's liberal use of dramatic licence.

Once back in Sydney, he's soon doing battle with razor gangs and Chinese opium smugglers but he also teams up with two old friends, Rex (Corey Large), a knockabout Canadian and fellow troublemaker, and Adams (William Moseley), a Cambridge graduate whose toffy British accent has earned him the nickname "Dook". With Charlie (Clive Standen), the hard-drinking owner of the Sirocco, they set out for Papua New Guinea.

As Flynn, Australian actor Thomas Cocquerel (Red Dog: True Blue) has the looks but neither the accent nor the urbanity required to bring him back to life. It's a tepid effort with a vein of misogyny predictably running through it. While Flynn finds all women irresistible, none are worthy of his trust. For that, he needs his drinking mates.

Previous post How old is Louise Thompson, when was the Made In Chelsea star’s book released and is she in Croatia?