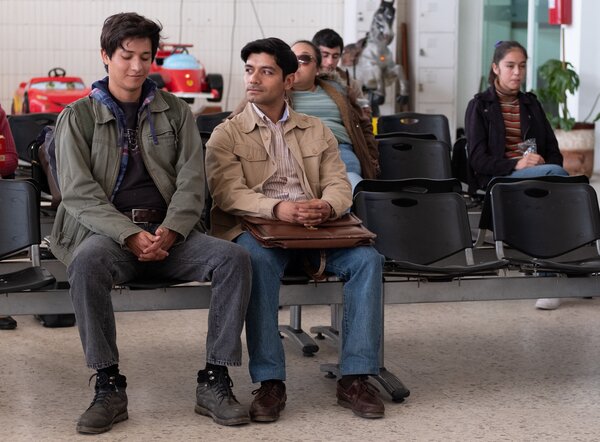 Iván Garcia, an undocumented immigrant living in New York City, has a sad, strong face and eloquent eyes. Having risen, astonishingly, from dishwasher to chef to successful restaurateur in little over a decade, he still dreams of his home in Puebla City, Mexico, and the son he left behind. Iván has changed countries, but he hasn’t moved on.

Turning time and memory into an elliptical portrait of what it means when borders become barriers, “I Carry You With Me,” the first narrative feature from the documentary filmmaker Heidi Ewing, trades distance for empathy. Dramatizing Iván’s story, and his longtime relationship with his partner, Gerardo Zabaleta (both men are friends of the director), Ewing and her co-writer, Alan Page, paint a journey — and a love story — defined by compromise. As Iván and Gerardo (beautifully played for most of the movie by Armando Espitia and Christian Vázquez) work to build new lives, what they have left behind tugs insistently on what they have gained.

This gives even the movie’s warmest scenes — like the couple’s first meeting, or Iván’s early bonding with his son — a poignancy that bleeds into Pablo Ramírez’s softly intimate images. Intercutting several timelines, Ewing alights pointedly on the homophobia and familial disapproval that helped propel Iván across the border. Her hybrid, impressionistic style leaves details fuzzy and leans too easily on sentiment; yet it also understands immigrant longing as more complex and elusive than economic imperative.

To Iván, “crossing over” was both an irresistible force and a double-edged sword. After closing a door he may never be able to reopen — and exchanging one source of anxiety for another — he knows there is nothing to do but endure.

I Carry You with Me
Rated R for mature themes and a little nudity. In Spanish, with subtitles. Running time: 1 hour 51 minutes. In theaters.