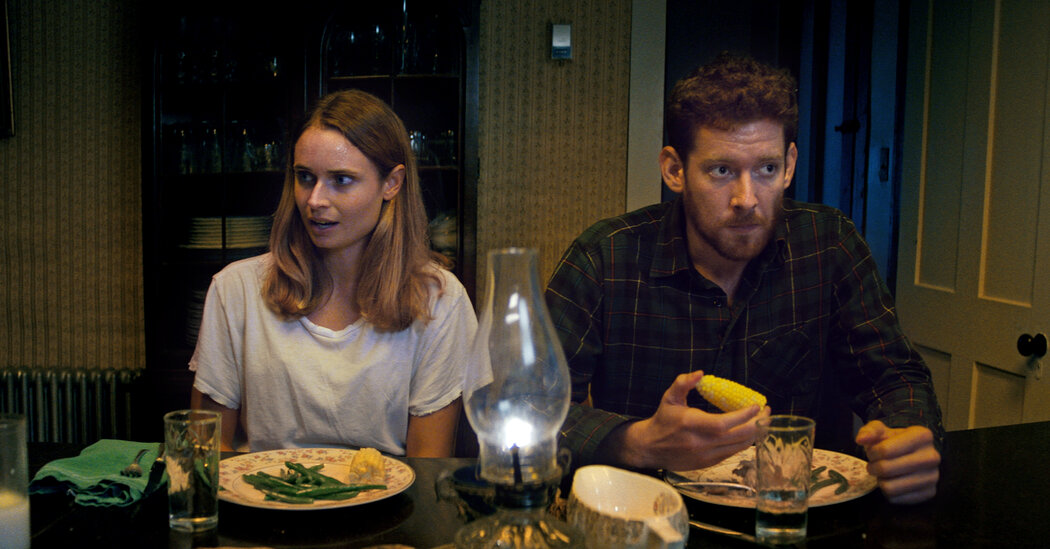 Harold Bloom’s 1973 book “The Anxiety of Influence” looked at the crisis of poets trying to create new work while contending with the aesthetic sway held over them by their forebears. Someday, a film critic, one with plenty of viewing experience, might want to write about the irritation of influence, particularly as it applies to genre film.

In “Honeydew” — written, directed and edited by Devereux Milburn (from a story he concocted with Dan Kennedy, who shot the movie) — a vintage cassette recorder placed prominently as a prop in early scenes, and a retro approach to split-screen, check off the box of a nouveau British horror player like Peter Strickland. The rural setting and the creepy simple-mindedness of some characters suggest elements of Ben Wheatley and Ari Aster. There’s a whole queue of grindhouse shockers from years past informing the plot. And never mind the man-mountain character named Gunni, pronounced “Goonie.”

An uningratiating young couple (Sawyer Spielberg and Malin Barr) on a camping trip find themselves compelled to spend the night at a farmhouse presided over by Karen (Barbara Kingsley) the sort of wide-eyed babbling character who, if encountered in reality, would be immediately told, “You know what, we’ll wait in the car.”

Food — its preparation, consumption and just what the hell its ingredients are — figures in a minimal plot that the filmmakers inflate in a variety of slick but ultimately unimpressive ways (particularly in the editing). Before various reveals aimed at churning the stomach, the movie revels in oozy atmospherics (ceiling insulation that looks like it’s breathing, a dripping pipe, static on an old tube TV). The showiness is finished, so to speak, with a misanthropy likely inspired by the 1974 “The Texas Chainsaw Massacre,” but miles more callow than that film.

Honeydew
Not rated. Running time: 1 hour 46 minutes. In theaters. Please consult the guidelines outlined by the Centers for Disease Control and Prevention before watching movies inside theaters.