There are plenty of memorable moments involving George Weasley (and one very grim one) from the Harry Potter films, but actor Oliver Phelps has picked a surprising scene as his all-time favourite.

Oliver recounted to Entertainment Weekly that he looks back most fondly at George and Fred meeting up with Harry in The Prisoner of Azkaban and handing over the Marauder’s map — a live tracker of everyone in Hogwarts.

“Of all the scenes we did in all the eight films, that’s the one I treasure more than anything,” he explained. “Because when we got the part, my grandfather started reading the books to try and understand what on earth we were doing, and he always said that scene was when you see our characters for the first time in their own element.”

Oliver went on: “I still remember to this day calling my granddad from the hotel and telling him how it went and everything. Unfortunately, he ended up passing away before the film came out.”

The actor believes that his grandfather would have loved the finished scene — especially because it mixed practical effects and CGI. Specifically, the actors used three versions of the map: one genuine prop, one that was green-screen and one that included both practical and CGI elements. 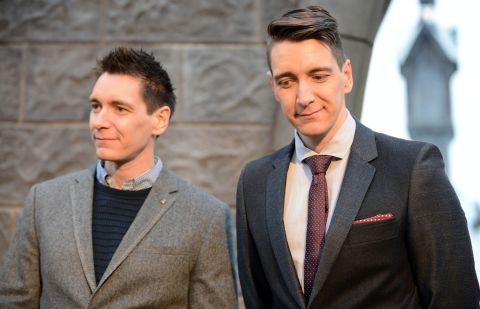 Looking back on another defining moment, he remembered: “I remember seeing [my wand for the first time] and literally just before we started filming, the prop guy gave me the wand and I was looking at this thing and then I just hear, ‘Ok, we’re rolling’. And I’m like, ‘Hang on, hang on, I’m looking at my wand!'”

It’s not quite a Marauder’s Map, but it was reported earlier this week that a Harry Potter advent calendar is on the way so fans can have a magical countdown to Christmas.