These dramas, both known for distinctive (and salty) dialogue, didn’t make much of a box office impression in 1992. But their influence is still being felt. 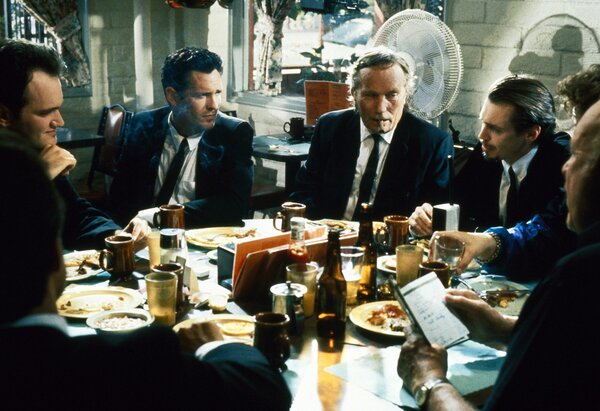 In October 1992, two startlingly similar indie dramas hit art houses across the country. Both featured all-male casts, sturdy ensembles of well-dressed men spouting tough-guy dialogue. Both would become notorious for their proficiency in profanity (one notched 269 instances of the F-word; the other, a comparatively tame 138). Both offered grim worldviews and 1970s-style bummer endings. And though both were ostensibly about a robbery, each carefully avoided showing the crime itself — to better allow their writers to withhold vital information until the conclusion.

Neither “Glengarry Glen Ross” (released on Oct. 2) nor “Reservoir Dogs” (three weeks later) made much of an impression at the box office that fall. But their influence was heavily felt in the ensuing decades — and from this vantage point, 30 years on, they have much to tell us about the state of masculinity in America at the end of the (first) Bush era.

Their origins couldn’t have been more different. “Glengarry,” which concerns a quartet of desperate real estate salesman and the theft of a cache of premium sales leads, was based on the Pulitzer Prize-winning Broadway play by David Mamet; the agent-turned-producer Jerry Tokofsky spent five years assembling the cast and raising the financing to turn it into a film, persuading such marquee names as Al Pacino, Jack Lemmon and Alec Baldwin to slash their usual fees for the pleasure of mouthing Mamet’s distinctive dialogue.

“Reservoir Dogs,” in which a crew of anonymous thieves assembles for a jewelry store robbery that goes badly and bloodily awry, was the debut film of the writer-director Quentin Tarantino. He penned “Dogs” expressly to be made on the cheap, planning to star in it with actor friends. But the script captured the eye of Harvey Keitel, who not only agreed to play the key role of Mr. White, but also to let Tarantino and the producer Lawrence Bender use his participation to attract a cast of up-and-comers, including Steve Buscemi, Michael Madsen and Tim Roth.

Tarantino, a would-be actor in the 1980s, presumably read “Glengarry” and seemingly learned from it. In addition to the similarities, both scripts pivot on the shocking unmasking of a sympathetic character as a traitor (though the reveal occurs midway through “Dogs” and at the end of “Glengarry”). Both riffed on the moody nihilism of film noir. And both find conflict and drama in putting their characters together in one confined space after the crime (the warehouse in “Dogs,” the real estate office in “Glengarry”) and letting them bounce off each other, roaring accusations and suspicions, bellowing obscenities and insults.

As is often the case when tempers flare and stakes are high, such unfiltered interactions give us a peek into the characters’ collective Id, and their common obsession is their own masculinity, the manliness of the work they do and how well they do it. That subtext is made text early in “Glengarry Glen Ross,” in its most revered scene (one that Mamet invented anew and added to his screenplay adaptation). Alec Baldwin appears as the viperous Blake, a hot shot from the home office who schleps down to the Sheepshead Bay branch to lead a sales meeting that amounts to eight straight minutes of vicious verbal abuse. “You can’t play in the man’s game, you can’t close them, then go home and tell your wife your troubles,” Blake instructs the cowering sales crew. “Because only one thing matters in this life — get them to sign on the line which is dotted!” As Georgia Brown noted in her Village Voice review, “In the trade’s lexicon, the magic verb is to close. When Aaronow” — the sad-sack salesman — “complains he can’t close ‘em anymore, he’s confessing impotence.”

“They’re sitting out there waiting to give you their money, are you gonna take it?” Blake taunts the busted-out Shelley Levene (Jack Lemmon), later in his pep talk. “Are you man enough to take it?” The director James Foley cuts to an agonizing close-up of Lemmon, steaming; his subsequent actions can all be traced to, and perhaps blamed on, that moment of harrowing public humiliation. As if to somehow make the accusation more explicit, Blake concludes his tirade by brandishing a pair of pendulous orbs on a string, announcing, “It takes brass balls to sell real estate,” before tossing them back in his briefcase.

Such hazing rituals are par for the course among the performative brutes of “Reservoir Dogs,” which is filled with male bonding rituals: playing the dozens, chewing the fat over coffee or beers, spinning tall tales about crime and sex, and, of course, breaking into dramatic near-fisticuffs at the slightest provocation. Yet the particulars of Tarantino’s men — their identical suits, their color-coded pseudonyms, their hidden identities — underscore the impersonality of their expected behaviors, rendering them interchangeable, and thus impotent, as the salesman of “Glengarry.”

Blake also peppers his speech with insults of implied homosexuality, further tying their sales shortfalls to their notions of traditional masculinity. But this vernacular is by no means exclusive to his scene or character; aside from calling their office manager a “secretary” (with all the gender connotations therein), the unprintable-in-a-family-newspaper insults wielded by the sales force include the most verboten four-letter euphemism for the female genitalia. Yet the intricacies of male attraction and intimacy aren’t entirely eschewed. Ricky Roma (Pacino), the office’s only success, is seen landing a client with a pitch that sounds less like a sale than a pickup, assuring his mark of such unspoken truths as, “You think you’re queer, lemme tell you something, we’re all queer.”

A similar dichotomy exists in “Reservoir Dogs,” where the other F-word is deployed freely, but outside the gaze of the group, an intimacy and even tenderness blossoms between Keitel’s Mr. White and Roth’s Mr. Orange. When the latter is shot in the stomach during their getaway, White holds his hand, wipes his face and gives him permission to “go ahead and be scared, you’ve been brave enough for one day.” And Mr. Orange, terrified for his life but moved by these gestures, asks Mr. White to hold him.

Such chasms in thinking (and action) regarding masculinity were clicking through the culture that fall. A month after “Glengarry Glen Ross” and “Reservoir Dogs” slipped into theaters, voters would eject the incumbent president, George H.W. Bush — a man branded by his detractors, during his candidacy and administration, as a “wimp.” Bush was so determined to shed that sneering indictment of his blue-blood upbringing that some pundits believed it influenced his decision to invade Iraq.

His replacement, Bill Clinton, offered up his own contradictions. A baby boomer vowing kinder, gentler leadership, he promised an administration informed by the participation and influence of his accomplished wife, Hillary — all while dogged by charges of rampant infidelity, ultimately overlooked by voters, with a collective “boys will be boys” shrug. The ’90s would be a strange time for the American male, and the closing lines of “Glengarry Glen Ross,” delivered by Roma, would prove not only dramatically effective but also socially encapsulating. “I swear, it’s not a world of men,” he despairs. “It’s a world of clock-watchers, bureaucrats, office holders … we’re the members of a dying breed.”