The lead in a romance may seem like a prize for most actors, but the star of the new drama “Sylvie’s Love” had reservations.

“There was no way that I was going to do a romantic film until I read the script and saw that there were Black people falling in love in the ’50s and ’60s,” Nnamdi Asomugha, 39, said. “And then immediately I was like, OK, I think people need to see this film.”

“Sylvie’s Love,” which made its Amazon premiere on Dec. 23, is set largely in midcentury New York and explores the ebbs and flows of the relationship between Robert (Asomugha), a charismatic jazz saxophonist, and Sylvie (Tessa Thompson), a determined television producer.

Asomugha is considered a rising star in Hollywood: In 2017, his breakout performance in the drama “Crown Heights” earned Indie Spirit and NAACP Image Award nominations. Earlier this year, he made what the Hollywood Reporter called “a promising Broadway debut” in a new staging of “A Soldier’s Play” by Charles Fuller. Behind the scenes, he has helped produce projects through his production company, iAm21 Entertainment, including “Sylvie’s Love,” “Crown Heights” and “Harriet,” as well as the Broadway play “American Son” (2018), which starred his wife, the actress Kerry Washington. 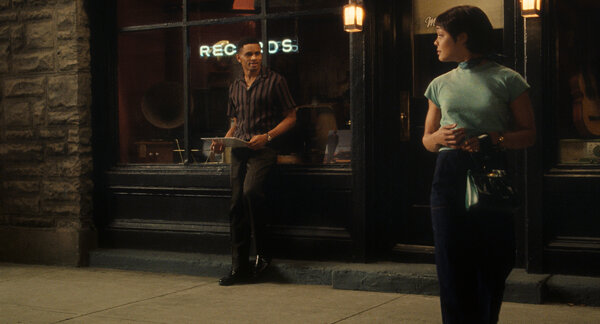 But before acting and producing, Asomugha was considered one of the best cornerbacks in the National Football League, playing 11 seasons for the Oakland Raiders and other teams before retiring in 2013.

He spoke recently via video about making the transition from football to acting, preparing for “Sylvie’s Love” (directed by Eugene Ashe) and the unexpected experience of appearing on Broadway. These are edited excerpts from the conversation.

You’ve gone from a successful N.F.L. career to an acting career. What was the timeline for you?

I was just obsessed with movies and television growing up. When I finished playing, the advice I kept getting from former players was find something to do that you are absolutely in love with. Because the love you have for it is what will sustain and lead you. And I knew that this was an avenue. I didn’t know that it was necessarily going to be producing, but I knew I wanted to go into acting.

Were you still an N.F.L. player when you got bit by that bug, or was this after your career?

While I was still in the N.F.L., but I didn’t make the decision until probably a year after [retiring]. You go through this period of soul-searching when you finish doing something that you’ve done for the last 20-something years of your life. It’s an identity crisis, like, do I have any more things to look forward to in life? All the traumatic things you tell yourself.

On top of that, I knew that I wasn’t 20. I wasn’t just coming out of Yale or Juilliard. The window felt so much shorter to me. So I didn’t want to wait. I wanted to just start creating the projects so people can say, oh, OK, he does know what he’s doing.

Do you often take lessons and experience from your football career and apply them to your acting career?

I advise people all the time, get your kids into sports because sports shaped my life — from discipline and patience and hard work and falling down and needing to get back up and not complaining. But the No. 1 thing I think is the preparation. The same preparation I need to get ready for a football game or football season, I’ve brought that to acting.

When did you start playing football?

I was 12. The first year I played football was the last year I played the piano. One day, I was late for practice and my coach said, where were you? I said I’m sorry, I had a recital. And he laughed so hard. It was this big thing and I had to run laps. That was the last time I ever played the piano. And that was the start of my football career. It was both devastating and also affirming. Like, OK, I need to focus on this. This is going to be what I do now.

You found your way back to an instrument.

Did you have to learn how to play the tenor saxophone for “Sylvie’s Love”?

I didn’t have to, but I chose to because I love preparation. I love the process more than anything, sometimes even more than the actual moment. I got a saxophone coach who was also in the film and we played for just over a year. And I learned that I was really good at playing the saxophone. I say “was” because I haven’t played it in a while, so I’ve lost a lot of that. But I wanted it to look authentic.

The film is set during the civil rights movement in America. But with these two Black characters and an almost entirely Black cast, the backdrop isn’t politics, it’s jazz. We see some of those elements play out but that wasn’t the focus. Can you explain the intent behind that?

It was important for us to make those elements nuanced and not in your face. We wanted to focus on the love. We’ve been so defined by that period as Black people. We know about marches and protests and water hoses and dogs and struggle. But we were also falling in love. We were having families, getting married, going to the dance. My father-in-law says we used to go to “the dance,” we didn’t call it the club. We had that as a part of our culture of Black people and to not celebrate that is a crime. It robs us of our humanity and just an entire aspect of our lives that really helped us get through those difficult moments. So for us, the thought was, why not show that? Why not illuminate the love that we had for each other during this time period?

And it also was a reason some people passed on making the film because they felt like it should have been rooted in the civil rights movement. But that wasn’t the film we wanted to make. We felt that there was an audience for not just Black love, but love in general.

What are some moments from the film you hope resonate with viewers?

I think it was really important for us to show a level of vulnerability in men, especially Black men.

I hope that it will further the conversation of it being OK for men to be expressive, to tell how they feel. The important thing for us was showing men doing that in front of their women.

You’ve produced a few films, some of which you starred in. Why did you go the producer route?

The projects that I was seeing, not only did they not interest me, I wasn’t getting them. It’s not like the projects are there and they were like, “Here’s your job!”

I was so serious about this that I didn’t want to use football to get in the door. So it meant having to stand up [in classes] in front of a bunch of people that know who you are because they know football and you have to be doing a scene in front of them.

It’s just to say that there was a level of discipline that I had to have because I do want it to be something that’s sustaining.

How do you and Kerry Washington support each other as actors? Are there plans to collaborate with each other in a film?

I produced “American Son,” but as actors, there’s no plan as of now for that collaboration. We’re very supportive of each other’s journeys, but we’ve always been that way. We always want the best for each other in whatever we’re doing. And so it’s not in the detail of specific things; It’s just an overall appreciation for the hard work.

Do you hope to do more plays on Broadway?

I had no dream or aspiration of being on Broadway. I didn’t know that doing plays was going to be in my cards at all until I did an Off Broadway play and I fell in love with being on the stage. And then the next year, for me to be on Broadway in “A Soldier’s Play” and to be in a role originated by Denzel — I was just like, what is happening?