Where are we? What's going on? One moment we're in a make-up truck where a disagreeable woman is being given extra shadows under her eyes; then everyone in the truck is being rushed by some kind of commandant with a whistle up an alleyway, only stopping when the walkie-talkie tells them there is about to be an explosion. Boom! There it goes.

Then we see old shadow-eyes standing in front of an overturned bus telling a TV news camera that there were people killed here; you can't live like this; these people have to be stopped. Which people? What is she talking about? Nothing has happened to her. She's just an actor for hire. 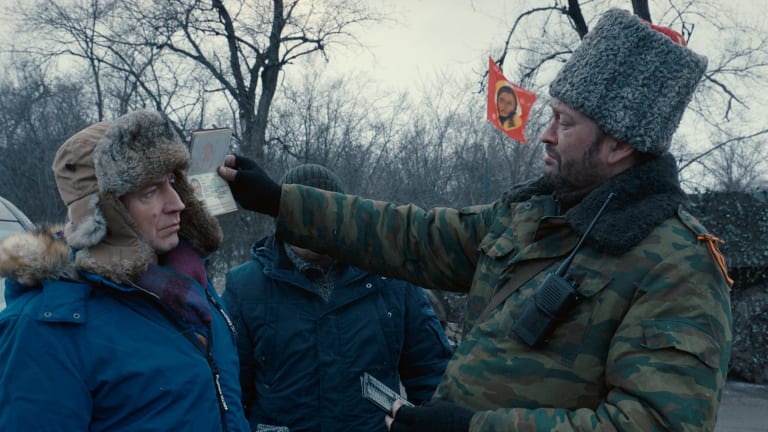 The ridiculous and the terrifying dominate in Donbass.

Welcome to the topsy-turvy hell-hole that is Donbass, latterly renamed Novorossiya, the disputed Eastern corner of the Ukraine now controlled by – well, who is in control here? You probably won't be much the wiser by the end of the bizarrely compelling new film from Ukrainian Sergey Loznitsa, not unless you have a good working understanding of the Ukraine's many factional and regional flags that feature in most of the vignettes he has spliced together into a showreel of the separatist conflict.

"But is always clear where humiliation is being created and who is being humiliated," Loznitsa says. "Where corruption happens, where stealing happens, where lies happen; even if you don't know the sides, you can tell where these things happen." 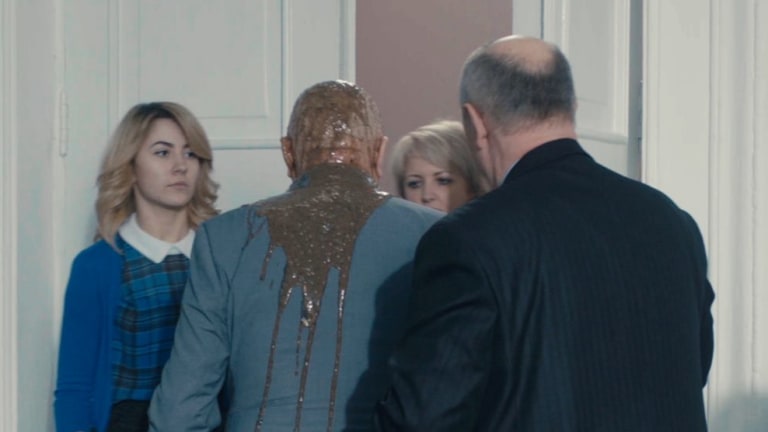 A speaker cops a bucket of manure in a scene from Donbass.

There is no getting away from the confusion. Loznitsa calls it a hybrid war. The Ukrainian army, supported by volunteers, battles various separatist groups supported by Russian mercenaries. There are also Russian troops charged with taking control of the territory, possibly to reclaim it for what was the Soviet Union. An open armed conflict thus runs in parallel with gangland killings and robberies and "a gradual degradation" of civilian society. Coal keeps being exported, for example, but nobody pays tax on it.

"People make very good money there. In the absence of power, in the absence of institutions, they can make a lot of money very quickly," Loznitsa says. "It's a lawless territory. And then of course we have this different layer, this lacquer of representation, of media."

His approach to this chaos is to show us a series of episodes, most of them based closely on real events, in the everyday life of a rogue state. A lot of them are funny. A council meeting under the Novorossiya flag is interrupted by a woman who pours a bucket of manure over the head of a speaker who publicly condemned her for taking bribes. Nobody seems especially surprised. "You've spoiled our session!" says one bureaucrat as the cleaning lady comes in with a mop.

Next up, a corrupt official ushers the staff of a maternity hospital into a storeroom to show them that they're not so short of food or medicine as they believed: here are fridges full of sausages! In an exchange worthy of Kafka, an official in fatigues receives a civilian who has been told his stolen car is waiting for him at the separatist administration's base. When he comes to collect it, he is told to sign a form declaring he is "entrusting" his work vehicle to the troops. He objects, so they take his passport as well. There is no escape and no redress, which makes it terrifying as well as ridiculous. 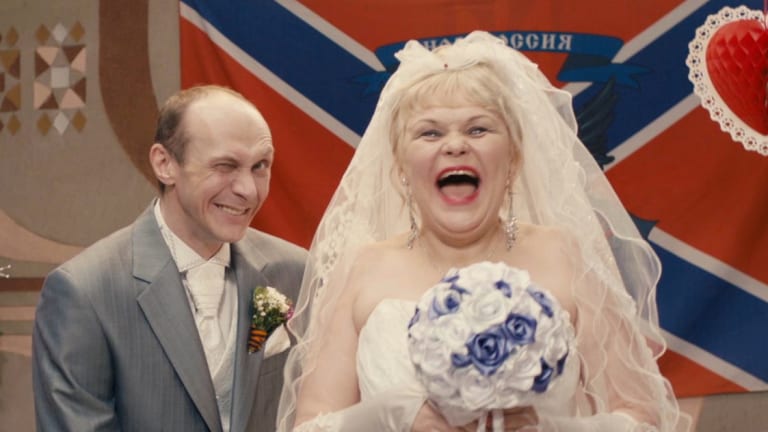 Loznitsa, who was born in Belarus, has spent most of his career making coruscating documentaries about his adopted country. Most of the dialogue in Donbass was taken verbatim from similar events in real life. The sausage scene, for example, was transposed almost intact from a recording made by a hospital worker. The same goes for the compulsory acquisition of the car.

"I recreated this amateur video footage as fiction, so the atmosphere was transported from the amateur footage to this terrible hallucination," he says. 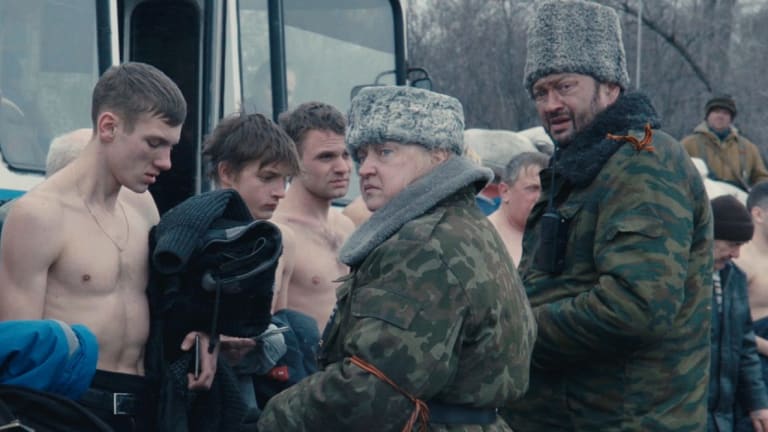 It is ”clear where humiliation is being created,” says Donbass director Sergey Loznitsa.

What happens if these people see the film and spot themselves? "Well, I think they will laugh," Loznitsa says. "Perhaps some people would recognise themselves and be proud of becoming prototypes for a film. The guy who steals the car would definitely be able to identify himself – and he would see himself played by a wonderful actor!" He laughs heartily.

"Sometimes it works in a more sophisticated way. Once I made a documentary film based on Soviet propaganda newsreels – it is a very sarcastic film – and one of the festivals in Russia gave me a prize for preserving beautiful memories of our glorious past. The prize was actually a luminous angel. A religious prize, straight from Putin!"

He did invent the story of the staged news footage which, he says, gives a framework to the scenes adapted from real life. "I offer the way, the key, to understanding the whole film. The subject is theatricality, the carnival that takes place, this society of spectacle that becomes more and more omnipresent and that reveals itself in this territory. That events are being staged. That is very important."

But everything here beggars belief, one way or another. In a cracking final scene, the fake news actors find themselves overtaken by reality; collaborating with the conquerors doesn't save their skins. That was his point, says Loznitsa: anyone can be a casualty in war, including a war of propaganda.

He shrugs. "It could be that it was just a coincidence it happened this day, just an accident, but it could also be it was not a coincidence, that it was planned and orchestrated. That was a traditional way of operating for the KGB. You create a victim and thus create a situation."

It has happened before, he says; in another instance, the murdered writer was vociferously anti-clerical so the murder was initially pinned on the clergy. "Oleg Sentsov [the Ukrainian film-maker currently imprisoned on charges of terrorism] is another kind of case. That's a showcase. They take an innocent man and put him in prison because they want to show that this can happen to anyone and that you should be scared."

And what about Loznitsa? In 2001 he expatriated himself with his family to Berlin, but he can't imagine making a film set in Germany: the Ukraine is his subject. Is he scared that he might be targeted? He shrugs.

"If I had been frightened I wouldn't be making these films," he says. But that isn't true, is it? You can be frightened of something and do it anyway. "OK," he says. "Well, there is a saying in Russian: 'if you dare to live, you should be prepared to die at any moment'. But I don't make films to put myself in the line of fire. I make films about the topics I find most acutely urgent. Important, paramount and necessary to talk about." And he isn't going to stop.