Hold the wand, because Eddie Redmayne now has homegrown skills when it comes to taming tiny creatures.

"She was toddling at the time, just running around causing complete havoc," says Redmayne, noting his whole family got in "fancy dress" as characters from Fantastic Beasts that night. "When I read the second script in which there are baby Nifflers … it was like I was method acting. I felt like I knew how to handle the baby Nifflers!"

Fantastic Beasts: The Crimes of Grindelwald (released in Australia this week) picks up in 1926, just weeks after the first film, as the fearsome, deceptively magnetic Gellert Grindelwald (Johnny Depp) breaks out of his New York prison and crosses the Atlantic to raise a dark resistance of true-blood wizards in Europe. 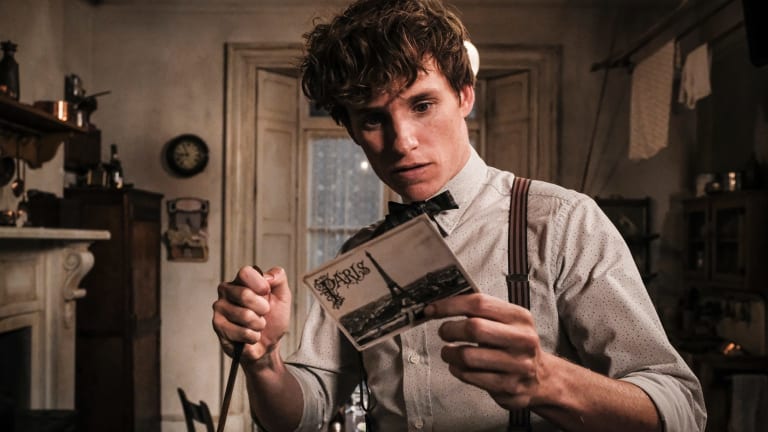 And when not caring for his case full of bellicose creatures, Newt is flummoxed to find himself quite awkwardly in love with criminal-chasing Auror Tina Goldstein (Katherine Waterston).

"What [Rowling] manages to do is to tell stories that feel completely contemporary yet also expose the fact that history repeats itself. She seems to shine a light on that … while also creating escapism," says Redmayne.

In real life, the Oscar winner is now a father-of-two (son Luke was born in March) with wife Hannah Bagshawe. Redmayne seems to have found a new rhythm, filming a Fantastic film roughly every two years while fitting in an occasional passion project.

In fact, Redmayne just wrapped The Aeronauts with his Theory of Everything co-star Felicity Jones – "well, almost finished the film", he says ruefully, glancing down at his ankle, which is encased in a brace. "Because on the penultimate day, I walked on a crash mat, tripped and ruptured the tendons in my foot."

Still, he's "incredibly happy" these days. Actors often lead nomadic lives, jumping from set to set around the world. Frankly, "that's not how I would like to live my life", says Redmayne.

"I'm quite an ordered, methodical person." Fantastic Beasts has afforded chunks of time when his brood can live at home (the franchise shoots outside of London, where Redmayne is based).

"My wife is much more free-spirited in that way, so she was all up for travelling," Redmayne says. "But it's wonderful to know with these films, if they continue to happen, that there's a kind of consistency where very couple of years there will be a period where our roots will be [there]."

Redmayne, as gracious a movie star as they come, is now confronting a new conundrum: It's unavoidable that Crimes of Grindelwald must also contend with a cloud of bad publicity that has settled over Depp, the sequel's title character.

USA Today film critic Brian Truitt noted in his review that Depp's "very appearance in these movies has been questioned by fans because of the actor's offscreen controversies", and specifically his messy split from wife Amber Heard, though he found Depp "proves a worthy bad guy with his Grindelwald, a silver-tongued, entrancing leader".

Today, Redmayne says that "what happened between them, they spoke about publicly, they resolved between themselves and I'm just choosing to respect their words".

Offscreen, Redmayne's priorities are clearer than ever. Upon completion of The Aeronauts, he's circling an upcoming Aaron Sorkin project, The Trial of the Chicago 7.

His chief goal with work, he says, is to travel as a foursome. "I'm happy to give everything to [a project], but I need to make sure that they will bring my family," he says.

And given these often dark, Muggle times we live in, the actor says he's pulled toward making films that inspire the imagination. "We're all looking down in the world and everything is insulated," he says. "It's about the wonder and encouraging people to keep looking up and aspiring."