In the mood for a Rocky marathon? Grab some popcorn, get cozy on the couch, and prepare for lots of boxing. Sylvester Stallone’s Rocky launched a movie franchise that’s still going strong more than 40 years later. Now, the Rocky franchise includes not only Stallone but Michael B. Jordan too. Without further ado, here are the Rocky movies in order. 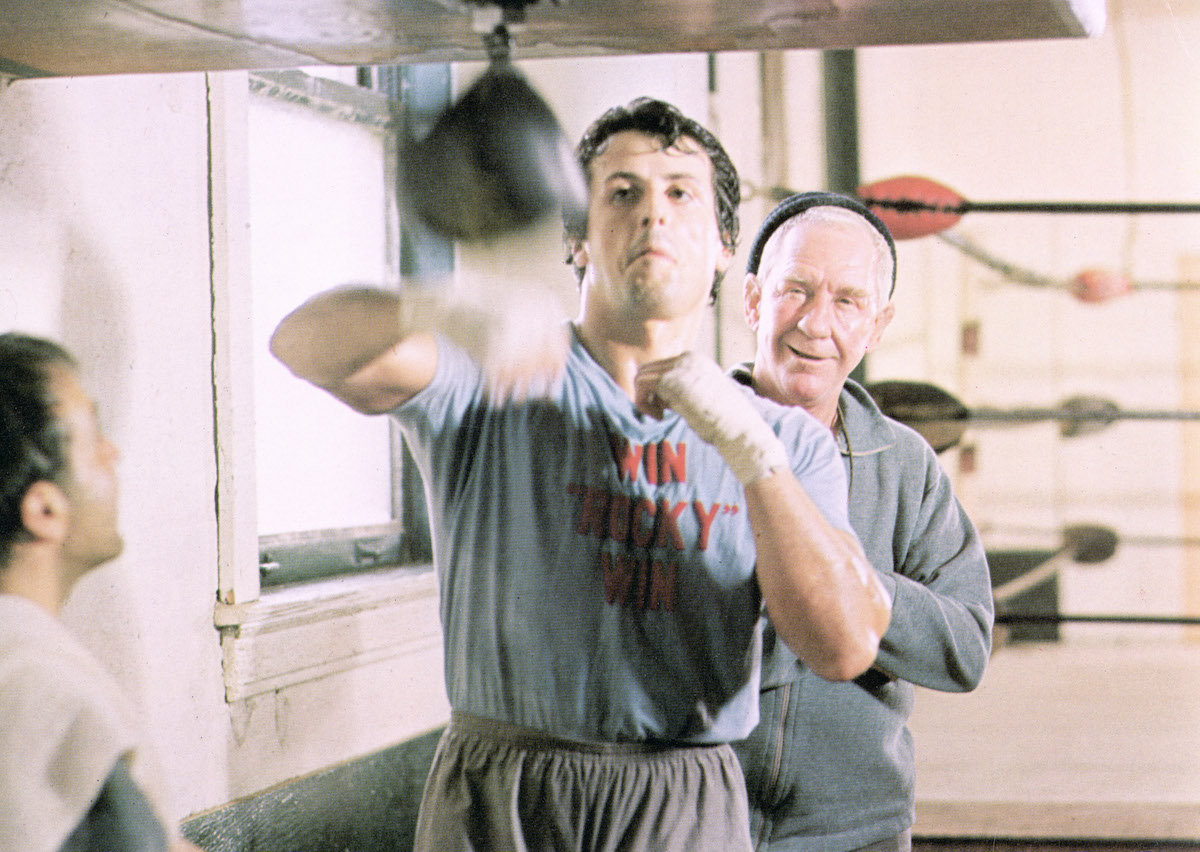 The one that started it all. Rocky hit theaters in 1976. Stallone not only played the lead character, Rocky Balboa, but he also wrote the Rocky script.

As he explained during a 2005 Howard Stern interview, Stallone spent three days writing the script. Inspiration struck when Stallone watched Muhammad Ali and Chuck Wepner in the ring. Ultimately Stallone did “maybe 25 rewrites” on the script before filming Rocky over 28 days.

The film follows his character, Balboa, as a small-time Philadelphia boxer who gets the chance to face off against the reigning heavyweight champ, Apollo Creed (Carl Weathers). Watch Rocky on HBO Max or stream it with a premium subscription to Hulu or Amazon Prime Video.

Stallone headed back to the boxing ring in 1979 for a Rocky sequel, according to IMDb. The follow-up to the wildly successful original followed Balboa in the wake of his loss from Creed. Although he didn’t win the bout his story caught the attention of the media and made the working-class Philadelphia man famous. As Balboa’s star power increased, Creed approached him about a rematch.

Watch Rocky II on HBO Max or stream it with a premium subscription to Hulu or Amazon Prime Video.

The Rocky franchise continued in 1982 with the release of Rocky III. Stallone’s Balboa had become the heavyweight champion of the world. He had everything going for him until he didn’t. Balboa’s trainer, Mickey (Burgess Meredith), died. Then he had his title stolen by Clubber Lang (Mr. T). Ultimately Balboa turned to his former nemesis, Creed, for support.

Watch Rocky II on HBO Max or stream it with a premium subscription to Hulu or Amazon Prime Video.

In Rocky IV Balboa planned on retiring after he’d already reclaimed his title as world champion. But his plans of living a quiet life with wife Adrian (Talia Shire) were shelved when Creed died during an exhibition match with Ivan Drogo (Dolph Lundgren).

To avenge his friend’s death, Rocky trained for a fight with Drogo on Christmas Day. Years later, Stallone revealed Lundgren nearly killed him when they were pulling real punches on each other during filming.

Watch Rocky IV on HBO Max or stream it with a premium subscription to Hulu or Amazon Prime Video.

This 1990 movie follows Balboa as he makes a comeback. After retiring only to discover his accountant mismanaged his money, the boxer comes out of retirement to mentor a young boxer named Tommy (Tommy Morrison). Meanwhile, Balboa attempts to patch up his relationship with his son, Robert (Sage Stallone).

Watch Rocky V on HBO Max or stream it with a premium subscription to Hulu or Amazon Prime Video.

Stallone took a 16-year break from Rocky until Rocky Balboa hit theaters in 2006. The sixth installment in the franchise told the story of Balboa as he navigated life after his wife’s death. Planning on going back in the ring for a few small-time matches, the former champion found himself training once again to take on the world’s reigning heavyweight champion.

Watch Rocky Balboa on HBO Max or stream it with a premium subscription to Hulu or Amazon Prime Video.

RELATED: ‘Creed III’: Did Michael B. Jordan Have to Kick Sylvester Stallone Out of the Sequel?

Creed is when Jordan joined the Rocky franchise. In the 2015 film, he played Adonis Johnson, the son of Creed. A newcomer to boxing, Jordan’s character sought out Balboa and asked him to be his mentor.

Jordan trained intensely for the role. He followed a special Creed diet and even got up early to eat two breakfasts. Watch Creed with a premium subscription to Hulu or Sling TV.

Jordan reprised his role in Creed II. Once again he played Creed’s son. This time his character faced off against the son of the man who killed his father. There to guide him along the way was none other than Balboa. He trained Johnson for the fight of his life.

Watch Creed II with a premium subscription to Hulu or Sling TV.

Next up is Creed III. Directed by Jordan, it’s slated for a November 2022 release. The SAG Award winner has said it may or may not be the last Rocky movie.

IATSE and AMPTP Have Reached a Deal to Avert a Strike

Katey Sagal Hospitalized After Being Hit by a Car in L.A.