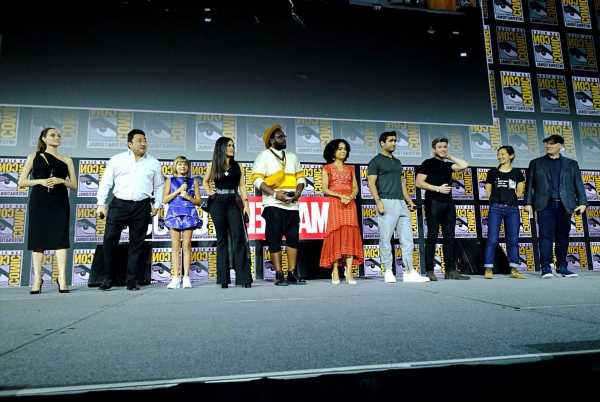 One of the best parts of any Marvel Cinematic Universe film is the post-credits scenes. Of course, every fan gets excited to sit down in the movie theater and watch a new installment into the MCU come to life. But, it’s also thrilling to get a tease of what’s next. And the latest Marvel film will be no different. A recent interview with Eternals director Chloé Zhao revealed what fans could expect from the post-credits scenes and how many of them there are.

‘Eternals’ will have two post-credits scenes

Eternals director Chloé Zhao recently spoke with Fandango about her upcoming film. When asked if fans should stay through the credits, Zhao said, “Yes! Don’t just stay for the first one — also stay for the second one, too. They are equally as important in weight, and both have big surprises for you.”

So, not only will there be an Eternals post-credits scene, there will be two of them. Two post-credits scenes are usually the norm for the MCU, but it’s nice to know ahead of time if fans should wait around until the last credits roll in the theater.

Because we do not know a lot about Eternals or its place in this expansive universe, it will be interesting to see what the post-credits scenes contain. But Zhao did tease in her interview that the scenes are significant and filled with surprises. If that promise does not get you pumped for Eternals, we do not know what will.

Given Chloé Zhao’s comments regarding Eternals‘ post-credits scenes, it makes us wonder if the film is more directly connected to the MCU than we previously thought. But Zhao also confirmed that fans do not have to watch the entirety of the MCU to understand Eternals.

In the interview with Fandango, Zhao said, “The film completely stands alone. If you know half the universe disappeared, and it came back, that’s all you need to know to watch this film. But what happens in this film will have huge implications on the future.”

So, if Eternals is a stand-alone film, does that mean that the surprises in the post-credits scenes do not include fan-favorite MCU characters? It seems to us that Zhao implies that there is a future for the Eternals in the MCU. And that automatically means that they will be tied to the other superheroes that fans have already met. But only time will tell if Eternals features a direct tie to other upcoming Marvel films.

Everything we know about ‘Eternals’

Eternals is something of a mystery to Marvel fans because this will be the first time they meet any of these immortal superheroes. So there’s no doubt that Eternals will feature many surprises, and not just in the post-credits scenes. What we do know about the upcoming MCU film is the premise, the cast, and the history of these characters in the comic books.

In the comics, the Celestials visited Earth millions of years ago and performed experiments that created two divergent races; the Eternals and the Deviants. The Eternals are sworn to protect Earth from the Deviants and never interfere with humans. This explains why they didn’t help the Avengers fight Thanos.