The packed biographical film “Enfant Terrible” races to keep up with the blazing life of the filmmaker Rainer Werner Fassbinder. 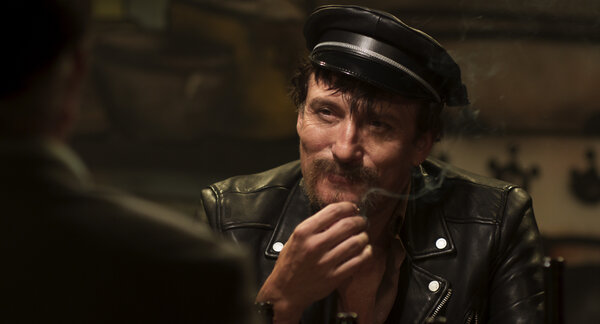 Oskar Roehler’s “Enfant Terrible” runs through an impressively packed compendium of Rainer Werner Fassbinder’s life and works — the brilliance, the sadism, the compassion and the leopard-print suiting.

Roehler begins with Fassbinder upending Munich’s Action Theatre in his early 20s, and his fearless artistic talent suggests a force of nature unleashed upon an unsuspecting world. An account of milestones from the director’s 40-plus features follows, from “Love Is Colder Than Death” to the Cannes breakthrough of “Ali: Fear Eats the Soul” to the narcotic dream of “Querelle.” He holds rapt a circle of collaborators and lovers, but his sadistic habits and drug jags (he died in 1982 at 37) made it like being friends with a tornado.

Famous Fassbinder players include the actor Kurt Raab (Hary Prinz), and El Hedi ben Salem (Erdal Yildiz), the male lead of “Ali: Fear Eats the Soul” and a lover; not all appear by name (Frida-Lovisa Hamann’s rising star, “Martha,” seems to be Hanna Schygulla). Oliver Masucci (“Dark”) presides as the slovenly genius himself, and I like him when he’s screaming and copulating but I still wanted more. (Fanboy quibble: the actor flaunts a potbelly but he’s nearly half a foot taller than Fassbinder.)

Roehler shoots “Enfant Terrible” on stage-like studio sets, working through certain stylistic elements from certain Fassbinder films. The look adds to an affectionate tribute that’s more than a Hollywood-style “greatest hits,” partly just because of Fassbinder’s loving embrace of queer and working-class experience. But the film feels both hermetic and declarative, and it’s folly to constantly remind a viewer of Fassbinder’s impossible-to-replicate alchemy of color, lighting, angles and passion.

Enfant Terrible
Not rated. In German, French and English, with subtitles. Running time: 2 hour 14 minutes. In select theaters and on virtual cinemas. Please consult the guidelines outlined by the Centers for Disease Control and Prevention before watching movies inside theaters.