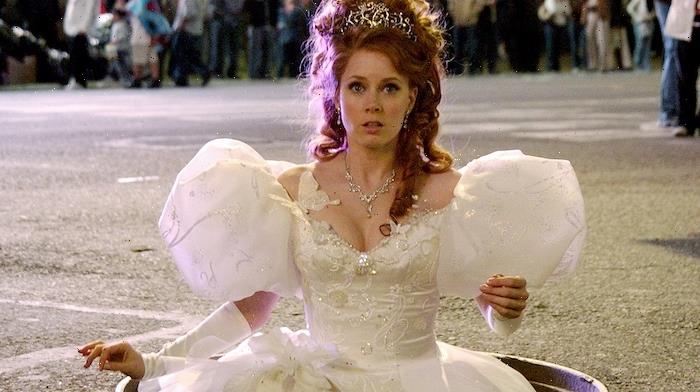 Shankman posted a picturesque photo of him and Amy Adams to his Instagram in celebration of the final day of shooting. Check it out below:

I mean, it’s kind of rude to turn your back to us, Mr. Shankman, but I guess thanks for letting us know this thing is hit a big production milestone. As you can tell from the IG post, Disenchanted will be hitting Disney+ sometime next year and while we don’t have a lot of info on the sequel, some stuff has leaked out during the course of filming.

According to TheDisInsider, the plot centers on Giselle, Robert and Morgan moving to a house in the suburbs and a spell that backfires. They also say to expect some Disney cameos, including a certain gaggle of dwarves, and that many of your favorites from the original film will be coming back, including Adams, Patrick Dempsey, Idina Menzel and James Marsden.

Joining on the fun in Disenchanted is Maya Rudolph as the film’s villain, and she’ll be joined by Yvette Nicole Brown and Jayma Mays as her sidekicks. The Office co-star Oscar Nunez will also have a role.

The most important returning favorite, though, is Alan Menken. He’s the composer and songwriter and has a long list of credits that is guaranteed to include an earbug for every single person reading this. Little Shop of Horrors. The Little Mermaid. Beauty and the Beast. Aladdin. Newsies (seize the day!). Pocahontas. And, of course, the original Enchanted. Menken is coming back with a bunch of new songs, including one for Idina Manzel, and he’ll have the help of Enchanted lyricist Stephen Schwartz again too.

Enchanted rules, especially for Disney fans. It’s self-aware, but also wholeheartedly in love with the Disney Princess genre, so while it may give the formula a gentle ribbing, it’s not a mean-spirited roasting. So now it’s time to refresh yourself on the original. Fair warning, though, hearing just a couple of seconds of “Happy Working Song” will get that damn song stuck in your head for at least a week.