“Emma Thompson is hilarious!” yelps a title to a compilation of clips on YouTube. Click on it and you will see Thompson jiving with chat-show host Stephen Colbert, throwing herself on the floor in front of Graham Norton and making animal noises with Ellen DeGeneres. Colbert reads out her biography from a program for Cambridge Footlights, where she mucked in with Stephen Fry and Hugh Laurie when the group won the first Perrier award at the Edinburgh Fringe. It describes her as shaven-headed, a wearer of baggy trousers, hater of depilatories, soaker of dried pulses and voter for the Socialist Workers Party. “Not much has changed,” Thompson says airily. Although she does shave her legs now. “I was a bit earnest, I think.”

She is still earnest, really, under the theatrical flamboyance. There are very few moments of hilarity in The Children Act, in which Thompson gives a dramatic performance as a Family Court judge “working with creased concern as only she can”, as the Irish Times put it. The Children Act is directed by Richard Eyre and based on the eponymous novel by Ian McEwan, who also wrote the script. The story is based on a real case heard by McEwan’s friend, Family Court judge Sir Alan Ward. Ward told McEwan how he had to decide – as Thompson’s judge Fiona Maye must decide in McEwan’s story – whether a teenage Jehovah’s Witness with leukaemia should be compelled to have a blood transfusion. It will save his life, but his religion forbids it; he is adamant he doesn’t want it but, as a minor, he is not responsible. 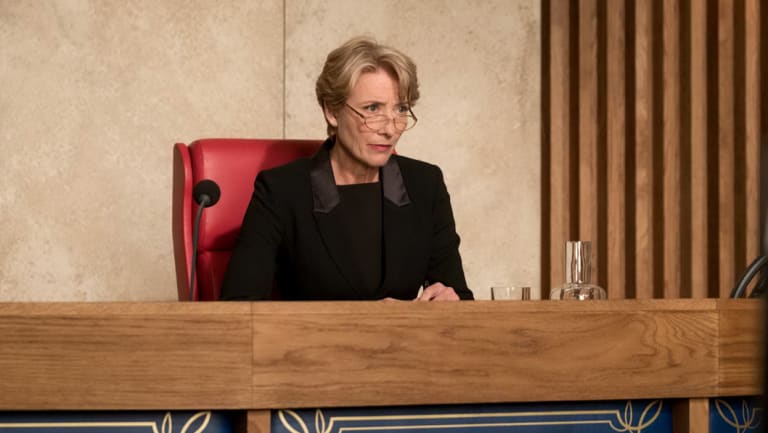 Maye is a serious woman in authority, married to a mild-mannered academic called Jack (Stanley Tucci) with whom she lives in a fine apartment uncluttered by childish things. If Fiona seems somewhat self-important, Thompson’s view is she could hardly be otherwise. “What is so interesting about that world is that I would say it’s very, very difficult to avoid,” she says. “The system of the law is designed to make you feel like a god. First of all, you sit above everyone, you sit in judgment and it’s an immense responsibility. So, number one, that. Then, when people come to you, they are very, very respectful. Backstage, there is a red carpet and only judges and their clerks are allowed to walk on it. Really! If you are treated in that way it’s very difficult not to ingest some of that sense of importance.”

Thompson spent a lot of time behind the scenes in the courts to prepare for the role, thanks to the good graces of Ward; he not only acted as an adviser to the film on legal niceties, but was able to swing her access to the judges’ chambers. “I know quite a lot of female judges now and I worship the f—ing ground they walk on,” she says. Unlike Maye, they don’t take their authority home with them. “But they work so hard and they’re so clever and some part of me goes 'well, they’ve every right to feel important', because they make decisions that impact on people’s lives in ways that very rarely other professions do. Well, doctors.” She stops short; consultants are actually terribly pompous, aren’t they? “There are whole sitcoms written about that!”

I am about to say how much I’d like to see Thompson playing matron in Carry On Doctor, but she is already turning over what she’s just said. “Actually, what you are drawing attention to is what’s wrong with our systems of power. Although the women I met actually inhabit those systems of power with a great deal more humility and adaptability and emotional intelligence. And a lot of the judges I met, male and female, had a fantastic quality, a kind of breadth of thinking, somehow, because of course they see so much.” Pain, mostly. “A constant liturgy of pain, these people going in and out all day – pain, loss, fury, suffering, particularly of children. “ 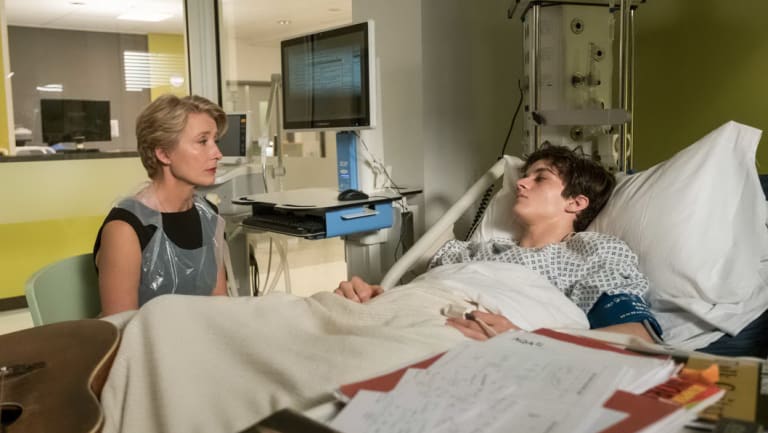 Emma Thompson as Judge Maye and Fionn Whitehead as Adam, who has been diagnosed with leukemia, in The Children Act.

In real life, the Jehovah’s Witness leukaemia sufferer was only 15. Under the English Children Act, Ward was obliged to protect the minor’s life, but he wanted to be seen to take the boy and his family seriously; he went to visit him in hospital, where they talked for a long time about football. McEwan sharpens the situation’s poignancy by making poor dogma-ridden Adam (Fionn Whitehead) a couple of months shy of 18. He is clear about what he wants. His anguished parents see themselves as supporting his decision rather than imposing theirs; Adam is obviously the clever one in the family. Maye duly visits him, just as Ward visited the real boy, but she and Adam talk about poetry. He has learnt to play a tune on the guitar – Down by the Salley Gardens, the Yeats poem set by Benjamin Britten – and she sings along. She becomes a woman sitting with a sick child, responding as a mother would. “And she’s not used to that, she doesn’t know how to deal with it.”

A constant liturgy of pain, these people going in and out all day – pain, loss, fury, suffering, particularly of children.

Of course, she orders the transfusion. When he recovers, Adam comes looking for her; she brushes him off smartly. Thompson wants to defend this rejection – a judge can’t be seen to fraternise with cases; it would be the end of her career – but realises she doesn’t know if that’s true. Maybe Maye is just scared of a situation that is beyond her control. “And she tries to control it, because she thinks of course he’s going to see that his life is out there. Because at that moment she is too stupid to recognise the fact that she has opened a whole world to him. Actually, it’s incredibly stupid of her not to see that. But you know, it’s stupidity that’s not meant. It’s just stupid.” 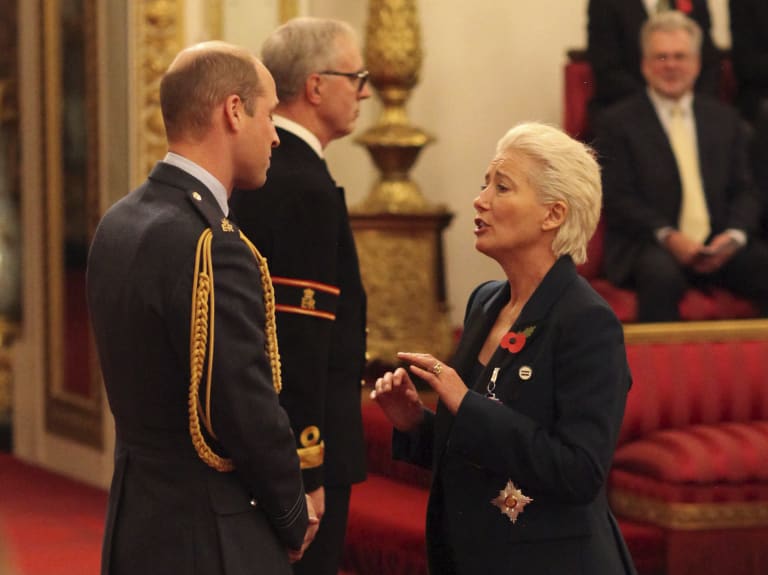 Emma Thompson is made a Dame Commander of the British Empire by Prince William.Credit:PA

There are more subjects to turn over: whether the Jehovah’s Witnesses’ position on blood transfusion is so different from her own feelings about designer babies. That makes her “panicky” but, as a French journalist has just pointed out to her, genetic manipulation is just a couple of steps along the same spectrum from blood transfusions. She doesn’t know what to make of that. She isn’t entirely sure even what to think about the Jehovah’s Witnesses, even though she is “obviously” an atheist. “You take a step back and say 'well, wait a minute, let’s look at where we find our beliefs'. We all understand the need to belong. We all understand the need to have a belief system. Everyone is tribal in one way or another.”

Earnest, but never quite certain: that is what is impressive about the frequently hilarious Emma Thompson. At 59, she has let her hair go a brilliant, possibly enhanced white. It matches her dress, a gleaming white tent of polished fabric; she’s like a friendly version of the Snow Queen. We have moved on to chewing over different kinds of intrusion into privacy – whether Adam’s pursuit of Maye is anything like the people who want to take selfies with actors – when the time comes for me to leave. No, she says. Well, maybe. “Certainly, there is a projection involved. But I chose a public life; I chose to entertain people. You can’t complain when the public say ‘oh, you entertained me, I’d like to say hello’. With Fiona, you know, he’s found her in her private space.” She takes a breath. “But good, very good, very good thoughts all round! There really is a lot to think about.”