Underrepresented filmmakers contributed to “Welcome to the Blumhouse,” a horror anthology streaming on Amazon. Here’s your cheat sheet on each film.

Blumhouse, the company best known for backing low-budget horror blockbusters like “Paranormal Activity,” “Insidious” and “Get Out,” has long had its eye on the small screen. Its TV division helped bring “The Purge” series, based on the horror movie franchise, to FX, and even had a hand in the HBO limited series “Sharp Objects.”

But lately Blumhouse has been using its widening reach to bring even more genre movies directly to streaming platforms — first through the Hulu anthology series “Into the Dark,” and now in partnership with Amazon on a film series called “Welcome to the Blumhouse.”

This month, the collection features four thrillers about twisted families. They’re billed as double features: “The Lie” and “Black Box” begin streaming in tandem Tuesday, followed by “Evil Eye” and “Nocturne” on Oct. 13. (Another four films in the series will stream in 2021.) Here’s the lowdown on each movie, as told by their directors. 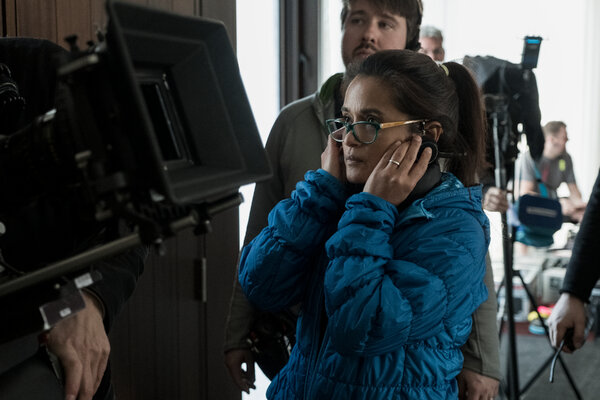 The Plot: When a teenage girl does something unspeakable, her parents discover how far they will go to protect her.

The Back Story: “The Lie,” a selection of the 2018 Toronto International Film Festival, is the only one of the four features that wasn’t commissioned specifically for the series. It is a remake of the 2015 German film “We Monsters,” which caught Sud’s eye because of her penchant for dark, human stories.

“My parents had no filter in terms of what they let us watch,” she said. “So as a child, I watched Hitchcock, I watched ‘The Exorcist.’”

That early exposure got Sud hooked on genre movies, particularly because she said she noticed that, in those movies, women and other marginalized people were more often the heroes of their own stories.

Sud would go on to create the American TV version of “The Killing,” adapted from the Danish series of the same title, which centered largely on a female homicide detective investigating the death of a teenage girl. Mireille Enos played the detective, and Peter Sarsgaard played a death row inmate for 10 episodes.

“Peter and Mireille, even though they were in deep conflict as their characters in that show, they said, ‘Let’s do it again. And let’s make it a love story,’” Sud said.

She brought the actors back together for “The Lie,” where their characters, though divorced, begin to reconnect while protecting their daughter, played by Joey King.

Sud was excited to add this morally conflicted couple to the “Welcome to the Blumhouse” slate of dysfunctional families.

“Especially now, we are in a pandemic, where so many families are forced to be together at all times,” she noted with a laugh. “It’s family time all the time.”

The Plot: A single father with severe memory loss undergoes an experimental therapy at the behest of his mysterious doctor.

The Back Story: Blumhouse approached Osei-Kuffour after the success of his short film “Born With It,” about a mixed-race boy who tries to convince his schoolmates that his dark skin is not a disease.

“I’ve been known to do sensitive coming-of-age dramas about kids going through adult situations for the first time,” Osei-Kuffour explained.

Though “Black Box” is the first horror movie from the director, who was inspired to go to film school in part by the work of M. Night Shyamalan, he was keen to ground the film in familial themes and sympathetic characters. At the beginning of “Black Box,” Nolan (Mamoudou Athie), a single father, is relying more on his school-age daughter (Amanda Christine) than the other way around.

“I really felt like it’d be interesting to see the story of a deeply flawed father that gets the second chance to be a good one as a result of a push from his daughter,” Osei-Kuffour said.

But another fictional family relationship also affected Osei-Kuffour’s work on the film. He knew it would be a long shot to ask Phylicia Rashad, perhaps best known for playing Clair Huxtable on “The Cosby Show,” to be in the movie, he said. But she gladly accepted the role of Dr. Lillian Brooks, remembering a brief meeting they’d had at a convention the year before, where they bonded over both being Houston natives.

Rashad became “a bit of a set mother” to Osei-Kuffour during the whirlwind 18-day shoot, he recalled, offering the first-time feature director advice and insights into the script.

“She was the first mother that I ever knew on TV,” he said. “It was a bit surreal.”

The Directors: Elan and Rajeev Dassani

The Plot: An Indian woman struggles to convince her independent American daughter that her love life is not as it seems.

The Back Story: Priyanka Chopra, the Bollywood actress and producer, brought “Evil Eye” to Blumhouse via her company Purple Pebble Pictures. The movie is based on a play by Madhuri Shekar (who also wrote the screen adaptation) about a first-generation Indian-American woman at odds with her mother.

Indian matchmaking culture is at the forefront of the film, and Usha (Sarita Choudhury) is especially eager to get her daughter, Pallavi (Sunita Mani), a good astrological match. As first-generation Indians themselves, the twin-brother directors Elan and Rajeev Dassani were immediately drawn to the story.

“Our own mother, whenever we go on a date, her first question is always, ‘All right, what time was she born? What date? Let me look up her star charts and make sure you’re compatible,” Elan Dassani said.

“Evil Eye” gave the Dassanis, who also helped create the Netflix series “Jinn,” a chance to explore these grounded concepts through a fantastical lens. The brothers wove Indian mythology and their upbringing in Hinduism into the movie, which hinges on the concept of reincarnation. They cited the sci-fi hit “District 9,” and the first-generation dramas “The Namesake” and “The Farewell” as influences.

The duo jumped at the chance to create the film for “Welcome to the Blumhouse.”

“What’s wonderful is, essentially they were looking to tell stories that were not typically told, and to give a voice to underrepresented filmmakers and rising filmmakers,” Rajeev Dassani said. “It’s so wonderful that they’re doing exactly what we love, which is telling propulsive, compelling genre stories.”

The Plot: A teenage pianist makes a devilish deal in a bid to outplay her fraternal twin sister.

The Back Story: The movie is a work about precocity as well as one born from it. The Oxford graduate Zu Quirke wrote “Nocturne” when she was 26, and filmed it when she was 27. “Nocturne” follows young Juliet (Sydney Sweeney), a shy pianist enrolled in a competitive performing arts boarding school who will do anything for greatness. The setting came from Quirke’s own teenage experiences as a competitive violinist.

“I eventually decided not to go into music, but I had a lot of friends who did go that route,” Quirke said. “And the thing that always amazed me was the sheer dedication they showed toward this pretty arcane, esoteric art. When the rest of us were listening to Green Day and Yellowcard, all these people were going away and playing ‘The Rite of Spring’ on repeat.”

“Nocturne” addresses the unpopularity of classical music among young people, as well as the sacrifices demanded of those who devote themselves to it. But Juliet’s greatest obstacle is actually her fraternal twin sister, Vi (Madison Iseman), who has everything Juliet wants: natural talent, a boyfriend, a spot at Juilliard.

Quirke found her Juliet first, and was eager for audiences to see Sweeney, who recently played the hypersexualized Cassie on “Euphoria,” in this mousy, unhinged role.

As an emerging director, Quirke said she was still finding her style, but admitted, “I enjoy moments of sudden violence.”