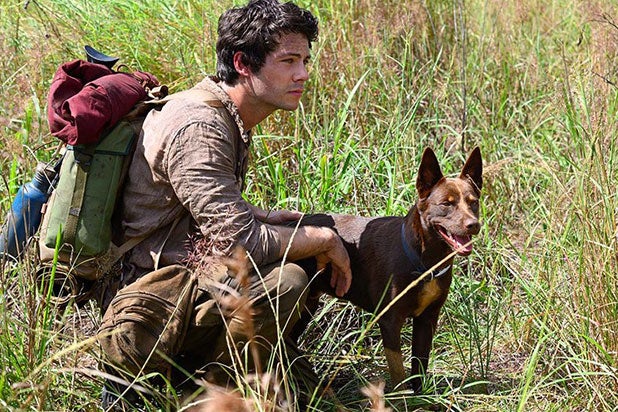 Dylan O’Brien’s “Love and Monsters,” formerly known as “Monster Problems,” will skip a theatrical release and will hit PVOD on Oct. 16, 2020.

The sci-fi thriller was previously scheduled to open in theaters on Feb. 12, 2021.

“Given the demand for new, high-quality entertainment right now, Paramount has decided to release ‘Love and Monsters’ widely on digital platforms,” Paramount COO Andrew Gumpert said in a statement.  “While we eagerly look forward to the reopening of movie theaters, we wanted to make this original and imaginative film available for everyone to enjoy at home.”

The film will cost $19.99 on VOD platforms for a 48-hour rental period. It will also be available for early Digital purchase for $24.99.

“Love and Monsters” takes place over seven years after a “monsterpocalypse” that forces all of humanity to move to underground colonies. As Joel Dawson (O’Brien) watches his fellow survivors pair off, he decides to go to the surface to find his high school sweetheart Aimee (Jessica Henwick). During his journey, he makes unlikely friends who help him survive.

The film was shot in Queensland, Australia, and is presented by Paramount in association with eOne. Shawn Levy and Dan Cohen are producing for 21 Laps, while John Starke is executive producing.

Brian Duffield (“Insurgent”) and Matthew Robinson (“Dora and the Lost City of Gold”) wrote the screenplay. Michael Matthews is directing.