A lot of “Dolly Parton’s Christmas on the Square” bears some resemblance to the familiar — greeting cards, mulled cider, Dickens, Velveeta. But the rest is its own thing. Tap dancing and tango at the bank? News to me. A beauty shop that basically doubles as a drag ball? Well, that’s not new, but no one’s actually in drag. The two men who start vogueing just look like they modeled for Sears. Then there’s the matter of Dolly Parton herself. She starts out homeless, in gray rags, singing in the center of town about the power of togetherness, wagging her box for change at people too busy doing back flips and jetées to notice. By the end of this thing, she’s virtually the deity at the end of “Angels in America,” full of vinegar instead of vengeance.

It’s bad, the sort of bad that knows what it is — campy rather camp. “Campy” is camp with a diploma and a martini. And “Christmas on the Square” is a drunk. Parton did the music. Debbie Allen did the bodies — the Ailey-isms and breakdances and swiveling in the pews. She’s also the director. And for the first 40 minutes, she, Parton and the screenwriter Maria S. Schlatter keep it all humming with the campy swish you need for a romantic-musical-family-tragedy holiday comedy. It’s “Fa-la-la-la-la, la-la-la-la Land.” 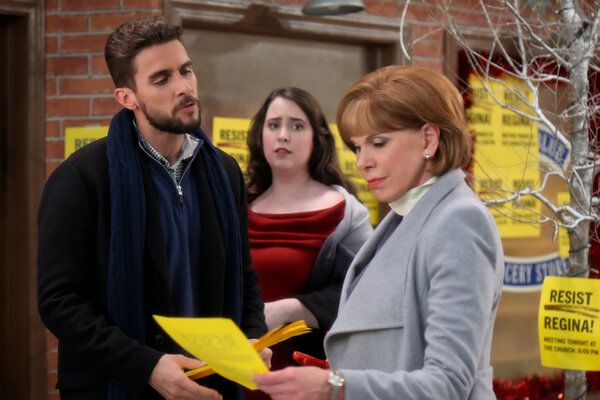 We have on our hands the sort of knowing bad that names a pastor Christian. It’s the sort of bad that sets itself in a town that is doomed to become a mall, yet already has the peppy wink-wink of an Old Navy commercial. It’s the sort of bad that Christine Baranski can captain to yachtdom. She plays Regina Fuller, the dame who arranged the sale of the town and spends the opening numbers blithely handing out eviction notices to shop owners, kids and dancers. The logistics of the arrangement are too fabled to grasp. But she’s taken seriously enough for that pastor (Josh Segarra) to lead the resistance and for people to start packing moving boxes. “Who would do this to people during the holidays?” Christian asks and she tells him, “Rich people who get tax breaks.” Regina don’t play.

Neither does Parton’s homeless angel. She’s got cloudy tuffets to perch on and manners to teach Scrooge-y Regina. Her scenes are spent guiding an angel trainee and giving Baranski the evil eye along with the withering folksiness that is Parton’s specialty as a movie star. Who else would bother describing what a mess really is by pronouncing the word so that it sounds like ‘car accident’?

The songs aren’t Parton gold. They’re not even Parton bronze. What they are, though, is committed to the task at hand: some percentage of wit, wisdom and attitude that every number seems to call for and with double the amount of exposition. At some point, Regina serves Margeline, the beauty shop owner (and ex mayor) who’s played by Jenifer Lewis. “Margeline, don’t even argue, ‘cause even though we’re friends who have grown up here together, here’s a notice to vacate and a notice to relocate. I’ll see you when you do my hair tomorrow. Don’t be late.” The woodwinds rise in hungry mischief to meet each “ate.”

This is a Christian undertaking, and Parton’s lyrics have the declarative navigability you need to learn a lesson. They just lack hooks. It doesn’t matter. Her songwriting is enjoying swiping a little of everything from the music buffet: Rodgers and Hammerstein, treacle, Ike and Tina. At Regina’s hair appointment, Margeline lets her friend have it with a gospel number that leaves some ripostes for Regina.

“Guess I don’t need a needle to get my ears pierced,” deadpans Baranski.

Anybody who prefers their entertainment spiced, spiked, salted, smothered and smoked might have been waiting for Baranski vs. Lewis. Their early scenes aren’t quite a cage match, but you could certainly use them to brine a turkey. The whole movie proceeds in this spirit of barbed earnestness. There’s a church-bound sequence in which Christian and his parishioners rail against Regina’s heartlessness, and somebody sings that “She’s cold as a witch’s —,” before everybody practically gasps and sings past her.

Allen’s camera is as overcaffeinated as her choreography. But she knows when to slow down and take in a scene, as she does with a couple of the ballads, like a duet between Baranski and a kid tending bar, who winds up in a last-act medical crisis. Wait, I made it this far without mentioning that Regina’s also having a medical crisis?! Well, she is. She just doesn’t care. So yes, the movie has more stretches than a yoga class. It’s also got Treat Williams, as Regina’s impossibly single old flame, still burning for her and ready with a song about why she’s wrong: his Christmas shop is not a room full of junk.

In about five minutes, “Christmas on the Square” resolves the fate of the town, an adoption mystery, both health problems and everybody’s contempt for Regina. Just from the standpoint of economy, it’s a miracle. What else should we expect from a movie involving a woman whose million-dollar donation to medical research reportedly resulted in a Covid-19 vaccine? Parton’s too self-deprecating to pat herself on the back but just self-amused enough to know an angel when she sees one.