Remember the surprise break-out Deadpool 2 character Peter – the everyman with diabetes (type 1 and 2) who became the world’s most unlikely hero when he joined the X-Force?

He’s the character that was always destined to become a fan favourite, so much so that originally the post-credit scene was going to be all about him, but comedian Rob Delaney has admitted that he had absolutely no clue what he was signing up for when he agreed to the movie.

During an appearance on Sunday Brunch this morning (October 7), Catastrophe star Rob admitted that it was true he didn’t audition for the film, and added that he didn’t care who he’d be playing when he was offered the chance to be in Deadpool 2.

“It so happened that Ryan Reynolds watched Catastrophe and enjoyed it,” Rob explained. “And so he just called and said, ‘Hey, do you want to be in the movie?’ And I was like, ‘Yeah, I’d like that’.

Of course, Peter ended up being so popular that Reynolds has announced that he’d like to see the character in his own spin-off, with the man behind the Merc declaring Peter one of his “favourite characters”.

He’s even got the film’s name all planned out: “Deadpool 3: Absolutely Peter.”

Rob has finished filming series four of Catastrophe, but no air-date for the new season has been confirmed as yet. He’ll next be seen on Comedy Central programme Stand Up Central and also shared his excitement over his work in the upcoming Elton John film Rocketman too.

“I’m not playing Elton John,” he began. “I shouldn’t say who I’m playing, although my not-real hair colour might possibly be a clue, I will not elaborate – I legally can’t.” 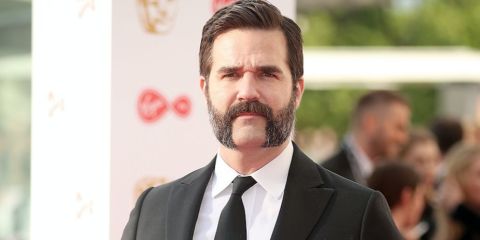 He added that the film was “so much fun to do” and praised Taron Egerton and director Dexter Fletcher, who previously worked together on Eddie the Eagle.

“It was such a pleasure to work with them, and it’s all fantasy and dreams and insanity. Elton John in the ’70s and ’80s, so it’s going to be amazing.”

Meanwhile, Deadpool 2 is gifting us a new censored cut just in time for Christmas, meaning that a more family-friendly version of the film will soon be available.

Sunday Brunch continues on Channel 4, while Deadpool 2 is available on digital download, DVD and Blu-ray now.

Previous post What time is Big Brother 2018 on Channel 5 tonight, who's been evicted so far and is this the last series?

Next post Who is Matt Willis? Busted singer and 2006 winner of I'm A Celebrity married to BB presenter Emma Willis