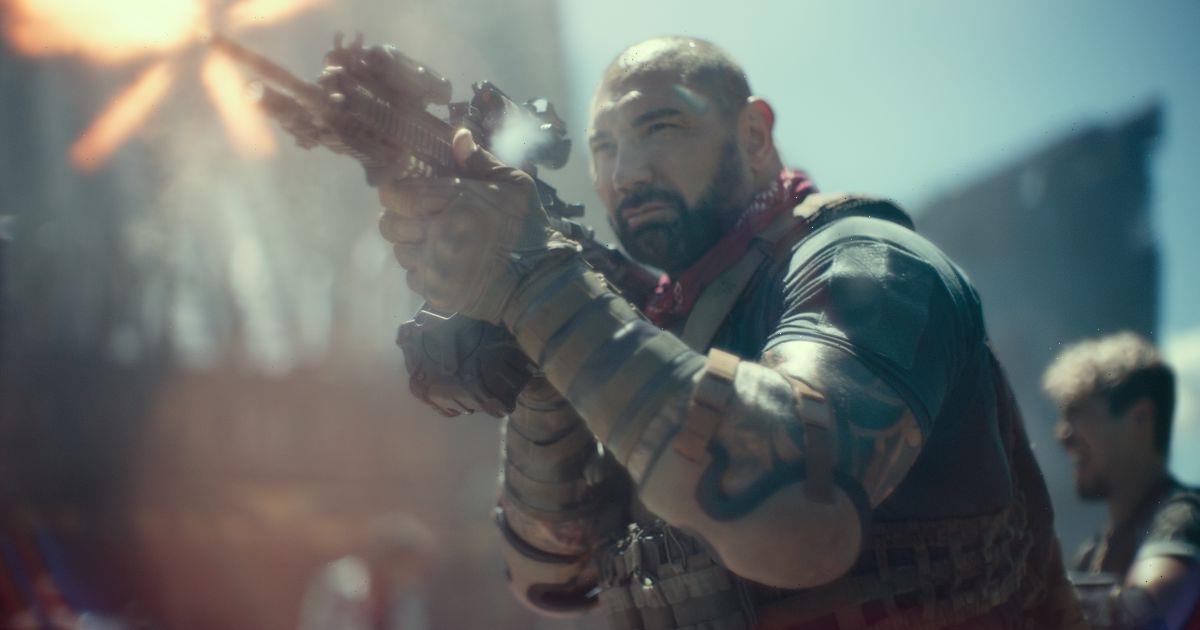 Dave Bautista almost turned down the upcoming zombie flick, Army of the Dead.

But thankfully, director Zack Snyder talked him around.

The former WWE wrestler told the Daily Star that he wasn’t looking for action films, but it was difficult to say no to a leading role in a Zack Snyder movie.

“It was described to me as a zombie heist film,” he said.

“I thought – that’s great, that’s really interesting, I’m a fan of both genres. But I’m not looking for action films.

“I was told that Zack was interested in me for the lead, and I really wanted to work with Zack, so I read the script and saw that it wasn’t what I thought it was going to be.”

Army of the Dead stars Dave Bautista as Scott Ward – a former veteran who’s tasked with pulling off a casino heist in the midst of a zombie apocalypse.

But it’s a lot more than that – it’s also a film about relationships.

“I really looked past everything else – past the zombies, past the heist, and I really dialled in on the relationship between Scott Ward and Kate Ward. And when I read the script, I read it like a redemption film – this guy is just a father who wants to reconnect with his daughter.”

It’s a surprisingly sensitive approach to the character from an actor who often finds himself typecast as burly action heroes or henchmen.

But over the past few years, Dave Bautista has really proved himself to be a phenomenal actor with a frankly staggering range.

Blade Runner 2049 saw him give an unexpectedly subtle and nuanced performance.

And it’s that softer touch that drew Zack Snyder to him in the first place.

“Dave has this softness to him even though he’s strong and scary,” said Snyder.

“You can imagine that his warmth is really the centre of that family and that, for me, was really important. I think he does a great job of really holding the whole thing together. In the end, it’s all about family. Even the zombies really, in a lot of ways, are about family.”

“But without Dave’s range I don’t think that would be as good as it is.”

The film focuses on a group of mercenaries, put together by Scott Ward to pull off the heist.

And the ensemble cast are all in agreement – Dave Bautista is the real MVP.

“Some of my favourite moments are when Dave is dealing with Ella in the movie,” said Omari Hardwick, who plays zombie-slayer Vanderohe. “All of the pain-staking moments as a father who has been estranged from his daughter.”

“Working with Dave was a lot of fun,” she said. “What I love about him is that he’s not only a muscled guy – he has a lot of sensibility. He’s a real actor. He has a lot of layers, he listens really well which is something that’s very important for an actor.”

Despite Bautista’s initial reluctance, it looks as though he made a real impression on the set of Army of the Dead.

And it’s a role he was really able to sink his teeth into.

“I talked to Zack after I read the script and I asked him if he would give me even more freedom to make the character even deeper and richer and more emotional, and he said ‘absolutely, man. This is why I want you for this role’.”

Army of the Dead is available to stream on Netflix from May 21.