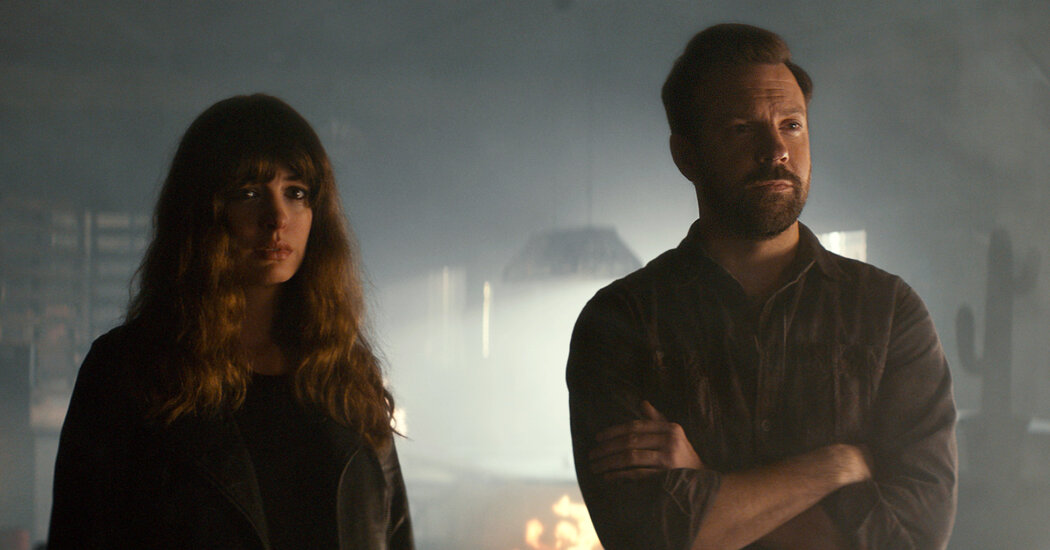 Are we in the final months of stuck-at-home viewing? The vaccination rates would certainly seem to indicate as much, but with positivity rates still worryingly high, your home theater is still the safest bet, even if it seems like you’re running out of streaming options. If so, we can recommend a group of oddball genre movies, a handful of complex indie dramas, and a documentary about art forgers and the deep-pocketed victims they took for a pricey ride.

With “Godzilla vs. Kong” on the horizon and “Promising Young Woman” heating up the Oscar race, why not try a movie that somehow fuses the spirits of both? Anne Hathaway stars as an unemployed, alcoholic writer who returns to her hometown in a fit of desperate self-pity; Jason Sudeikis is the old friend she takes up with, who offers her a shoulder to cry on and a bar to hang out in. Oh, and there’s also a giant kaiju rampaging through Seoul at the same time, a seemingly disconnected thread that intersects with Hathaway’s story in ways that are, to put it mildly, unexpected. But as those stories collide, she discovers the scariest monster of all: so-called “nice guys” who blow a fuse when their feelings aren’t reciprocated. Funny, scary and delightfully strange, with one of Hathaway’s most enjoyable performances.

You’ve seen black comedies, sure, but have you seen Ryan Reynolds play a serial killer who keeps severed body parts in his freezer and endures the harassment of his evil, talking pets? The “Deadpool” star works a precarious balance between helplessness and menace as Jerry, a seemingly harmless factory worker whose bland demeanor hides some disturbing demons; Gemma Arterton and Anna Kendrick co-star as potential romantic interests-victims. The premise courts bad taste at best and violent misogyny at worst — but it’s somehow all held together by the sure hand of the director Marjane Satrapi (“Persepolis”), who finds bleak laughs and strikes a perfect note of whimsical peril.

The writer and director Timo Tjahjanto takes the rich traditions of the Asian crime movie and cranks them up to 11 in this rip-roaring, blood-spattering action adventure. Joe Taslim stars as a Triad enforcer who throws away his life of crime to protect a young girl orphaned in a village massacre; Iko Uwais (“The Raid”) is an old friend and criminal compatriot who is brought in to track him down. Tjahjanto, adapting his own graphic novel, seems to know that the story is old hat, so he reaches into the realm of Grand Guignol, and the picture is deliriously over-the-top in its bone-cracking ultraviolence. It is epic in scope, but surprisingly grounded in emotion, and the resulting tonal whiplash keeps you on your toes for its entire two hours.

The great Iranian director Asghar Farhadi followed up the triumph of his Oscar for “A Separation” with another of his complicated morality plays, this one focusing on a divorcing couple, Ahmad and Marie (Ali Mosaffa and Bérénice Bejo) and Ahmad’s objections to Marie’s relationship with her new boyfriend (Tahar Rahim). As per usual, Farhadi loads the narrative with enough twists, turns, secrets and lies to fill a month of soap operas, but “The Past” never feels overstuffed or melodramatic; his characters are complex, multifaceted people, capable of both committing grave mistakes and uttering indisputable truths.

“Butch Cassidy and the Sundance Kid” features one of the great endings in all of cinema, as our heroes go out in a blaze of glory and, more important, a hail of bullets from the Bolivian army. This western drama from Mateo Gil asks a simple question: what if that didn’t happen? What if, instead, Butch Cassidy lived out a quiet life in Bolivian exile? Sam Shepard fills the role with exactly what you’d expect: grizzled, no-nonsense gravitas, displaying both the inner peace that’s come after years in the tumbleweeds, and the criminal instincts that return the instant he’s back in action.

Channing Tatum leads a star-filled ensemble cast (Chris Pratt, Oscar Isaac, Rosario Dawson, Anthony Mackie, Aubrey Plaza, Jenna Dewan, Justin Long, Kate Mara, Ari Graynor and many more) in this charming story of several circles of friends reuniting for their 10-year high school reunion. The stuffed cast and multinarrative structure is risky, but the writer and director Jamie Linden keeps the proceedings from getting too busy, telling a series of poignant, pointed mini-stories about growing up and looking back.

Aubrey Plaza does some of her best — and most unnerving — work to date in this darkly comic drama. She stars as the title character, a social media-addicted loner who ingratiates herself into the life of Taylor (Elizabeth Olsen of “WandaVision”), an Instagram influencer whose carefully curated existence proves both aspirational and impossible for Ingrid. Plaza pulls a neat trick with this performance, which she first plays as a not-too-distant cousin to the antisocial weirdos she’s known for, before pushing deeper into the character’s warped psyche and exploring the darkness deep within.

Bob Nelson, the Oscar-nominated writer of “Nebraska,” makes his directorial debut with a story told in a similarly modest key, about (mostly) well-meaning small-town folks, trying to work through their flaws and be better to each other. Clive Owen — displaying a refreshingly shambling, laid-back charm — is a recovering alcoholic whose weekend of bonding with his 8-year-old son (Jaeden Martell) is disrupted by a petty theft, which he treats less as an inconvenience than a score to settle. A cornucopia of marvelous modern character actors (including Tim Blake Nelson, Patton Oswalt, Robert Forster and Stephen Tobolowsky) keeps things bouncing.

In 1995, Ann Freedman, the director of New York’s Knoedler Gallery, purchased a previously unknown painting by Mark Rothko, which in turn sold for $5.5 million at auction. In 2011, the Knoedler Gallery closed its doors, following the revelation that the Rothko was the first of 60 fakes she acquired and sold on the gallery’s behalf — an $80 million art forgery scandal, the biggest in American history. Barry Avrich’s lively and entertaining documentary provides a detailed timeline of when and how that scandal happened, but it does much more besides, interviewing collectors and experts who eagerly blame Freedman, but are loathe to admit their own ignorance and complicity. No one comes off well here, and that’s part of the point; when so much of an entire industry feels like a scam, it seems foolish to get worked up over a single grift.