Bradley Cooper is not not happy to be on the press tour for A Star Is Born, the movie he specifically, exactingly, meticulously, perfectionistically, obsessively directed, co-wrote and stars in. In fact, he's very not not happy! He worked so hard on this movie. Every detail of it comes from a true thing – something he's learnt, something he's seen, something he knows for sure. It's such hard work to try for something true and to get it right, and maybe he's succeeded.

What a huge bet this was; what a long haul it's been; what a full-on occupation of the last four years – years in which he, after an Oscar nomination for American Sniper, had his pick of just about any role he wanted. Years in which his heart was consumed by little else. How could he not be excited for people to see it? 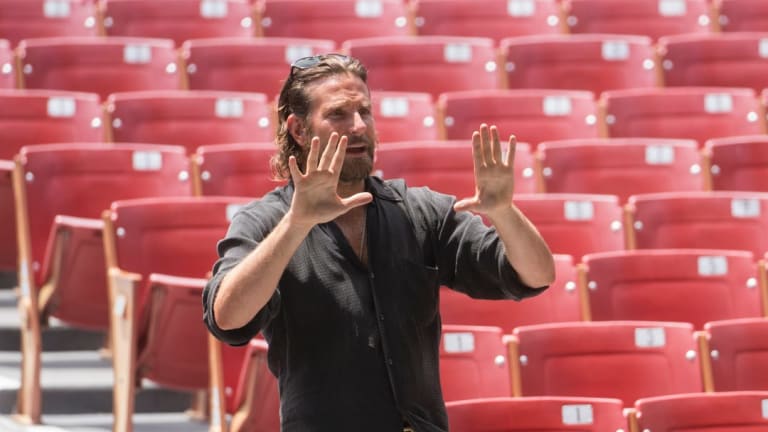 Bradley Cooper on the set of A Star is Born.Credit:Clay Enos

"This is the joyous period," he told me.

This is the third remake of the movie, the story of the big male star who plucks the little woman from obscurity and watches her celebrity and relevance rise above his, to tragic consequences. Each one is slightly different, a reflection of the filmmaker himself. Cooper liked that. He liked that there was an opportunity to reflect himself in there: his romantic view of creativity, his despair of what commerce can do to art. He liked that it was a love story above all those things. 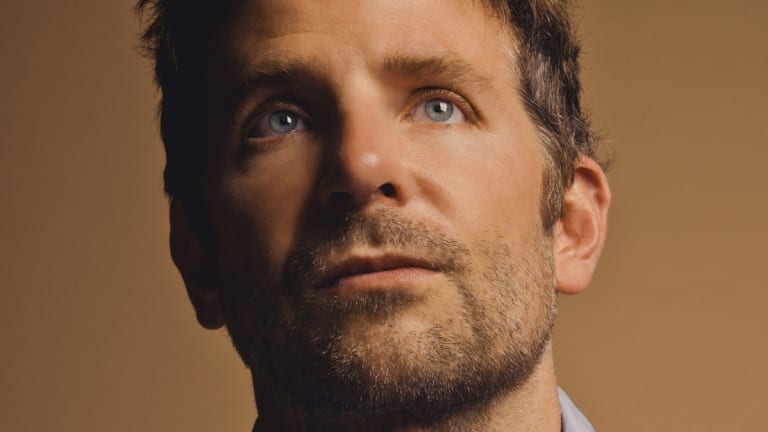 Bradley Cooper looked in the mirror one day and knew he was ready to play the lead in A Star is Born. ”I could see it on my face. I just felt it.”Credit:NYT

Jackson is not so much jealous of Ally, the character Lady Gaga plays, but he bemoans how the industry strangles her ability to say the kind of things she did when he found her singing La Vie en Rose in a drag bar.

Cooper is very excited to finally reveal this labour of love, this Everest of accomplishment. The things he's not so excited about – the things that maybe if he had his way he wouldn't do – involve the ways a person is expected and obligated to share it. Meaning, he's not really excited to sit down and explain the thing.

Which brings us to a hotel in New York's West Village, a corner booth, him fingering his Porsche Carrera aviators on the table in front of us, where he is willing to tell me a lot about his movie, where he is willing to share the same set of facts about its making that he's shared with many, many, many other reporters, but he is not willing to go much further. He doesn't like my questions about the particular inspiration for certain details in the movie. He doesn't like questions about his personal life and how it might relate to the big, sexy music movie I'd just seen. 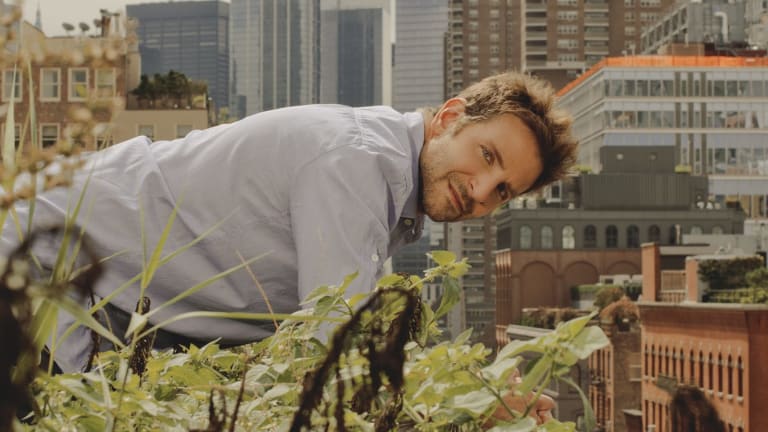 Bradley Cooper says everything changed when his father died.Credit:NYT

So he sat back and told me the same things he told everyone else, and I took notes and then spoke to some people who know him. Here's what I came up with:

He grew up loved, in Philadelphia, in a house full of music: Tom Waits and Bob Seger and Billy Joel and Mario Lanza and Led Zeppelin and Vivaldi and Tchaikovsky and Prince. His father was a stockbroker and his mother worked at an NBC affiliate and then raised her family. 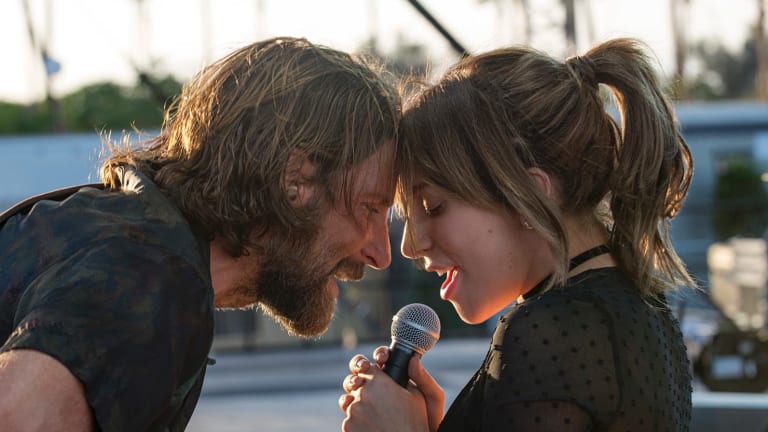 Bradley Cooper and Lady Gaga in “A Star is Born.”Credit:AP

He always liked performing. He played the upright bass, its neck sticking out of the window of the family Cadillac as he was driven to school. He was 12 when he saw The Elephant Man and knew right then he wanted to act.

He was a good student. He went to the Actors Studio for his MFA in acting. It was there that he met his beloved mentor, Elizabeth Kemp, who died in 2017 and to whom A Star Is Born is dedicated. He felt that once he met her, he was finally able to relax, for the first time in his life. He gave those classes everything he had. 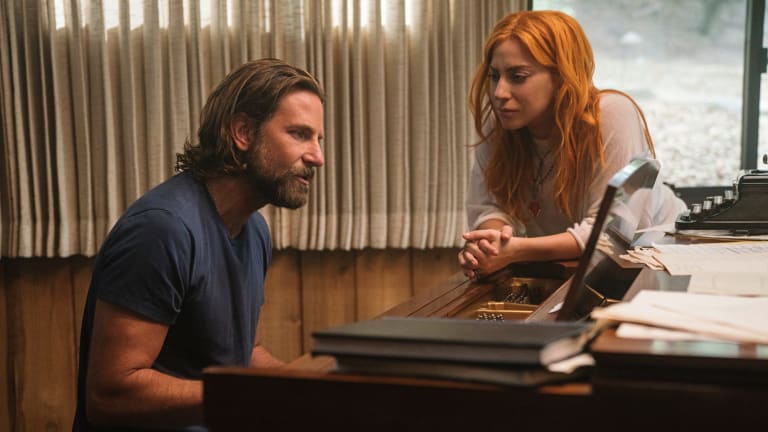 The wound was just the wound of being a human being.

All the while, he got to learn under his directors: Todd Phillips (The Hangover trilogy) and Clint Eastwood (American Sniper) and David O. Russell (who directed him towards his other two Oscar nominations, for American Hustle and Silver Linings Playbook). All the mundane stuff about directing, he loved it. He got to the point where he understood the machinery. He was ready. People told him to direct a pilot or a commercial to get his feet wet, but he didn't want to. He needed skin in the game.

After the blockbuster success of The Hangover, he never had to do a movie he didn't want to again. He took all the work seriously. But by the time he finished American Sniper, he had been feeling like he'd done enough acting. It was time to do more.

"I guess I felt like I wasn't utilising all of myself," he said.

But it wasn't easy to get someone to hand him a project. Some people told him that he was an actor and nothing else. Even in acting, people would just try to cast him in roles that were exactly like the ones he'd just played. Then he pitched A Star Is Born to Warner Bros, and whatever happened in that room made the Warner people hand over $US38 million before marketing costs.

In 2011, A Star Is Born belonged to Eastwood, who talked to Cooper about the role, but Cooper was hesitant. He was 36; he didn't think he could play someone that weathered.

"I knew I would be acting my balls off to try to be what that character was, because I was just too – I just hadn't lived enough, I just knew it," he said.

On the last day of filming The Hangover Part II, in 2011, he flew home to take care of his father, who was dying from lung cancer. He took his father to an Eagles game, and two weeks later, he held him in his arms when he took his last breath. When he told me that, his arms were in the formation they'd been in when his father last lay in them. Right then, he looked down where his father had been, and then back up at me.

He wanted to make a version of the movie in which the man isn't jealous of the woman. He wanted it to be closer to the truth of the way things generally go with people: They fall in love and begin to heal, but eventually it becomes clear that love cannot heal you completely.

He still needed to find his Ally. He attended a celebration for the opening of the Parker Institute for Cancer Immunotherapy at Sean Parker's house in Los Angeles – Cooper has been involved in cancer benefits since his father died – and that's where he saw Lady Gaga perform La Vie en Rose.

She was plutonium, he thought. She would be the thing his movie had that no other movie had. He called her agent and asked for a meeting. He went to her home in Malibu and there was a piano in the living room.

"She was so open," he said. He asked her if they could sing a song, and he began to sing Midnight Special. They downloaded the sheet music and sang it together, with her on piano. After one verse, she stopped him and began to record a video on his phone.

This is all great, I told him. It's good information. But now I had follow-up questions, ones based on clues from the movies and biographical information I know from previous interviews – was anything inspired by a specific relationship? What was he thinking in that final devastating scene?

Uh, yes, I said. I suggested that people like to know the artists behind the art – my job hinges on this notion.

He thinks that's silly. "Any time you do anything, you have to find personal things of yourself, but no, I mean, I felt like I was him. I wasn't, like, going, like, back to a moment of my life in that scene."

The movie isn't about him in that way, he said. It's just by him and of him. He made the movie to contribute to humanity, to speak to a viewer in the audience. He made it because creating art helps us heal one another. "That's the whole point of creating art, trying to somehow deal with the desperate reality of being alive, you know?"

OK, I say. OK. But what are we healing from? What was the wound? What was your wound?

All he'll say is this: "The wound was just the wound of being a human being."

I told him I was going to see the movie again. He gave me his number and told me to call him if I had any questions about the movie or the songs in it. He was nice. He just didn't want to be known the way I wanted to know him.

He took out his phone and asked me to shut off my tape recorder. He played me the Midnight Special video with Lady Gaga. In it, his voice is not yet as good as it would become, but he was reaching far down into his body for it.

We watched the whole five minutes of the video. His face was smiling and giddy while he saw it for the thousandth time.

A Star Is Born is a portrait of self-destruction. It's a story of love between two superstars and the co-dependence that festers between them. It's about being cruel to people you love. It's about the lure of the drunken haze and the way people can enable you. Ally's rise doesn't diminish Jackson's star; he is the agent of his own ruin.

I saw the movie again, and then I reread my transcript, and this time I understood. The movie is about all the things above, but mostly it's about the way that commerce interferes with art – how people who aren't artists pretend to know what art is, and how an artist has to protect himself from what the machine asks of him. Meaning that, in its own way, it's also about this profile.

Maybe what he was saying was that the movie tells me everything I need to know about him and what he values and who he trusts. It tells me what happened to him in the past to make him reticent about being open with someone who is trying to make her own art out of his story – so that she can heal her own wound on her own terms, and, well, he's the director now. He told me all of this. I just didn't know how to hear it.

A Star is Born is now showing.