A foul-mouthed 9-year-old with a taste for booze and cigarettes. An alien shape changer struggling with his sexuality. An addled space explorer out of sync with time. These are some of the colorful characters of the comic book series Black Hammer, and they are now potential stars of film and television in a deal announced Tuesday.

The series is being picked up by Legendary Entertainment, which has produced more than 50 feature films, including “Batman Begins” in 2005. Black Hammer, first published by Dark Horse in 2016, was created by the writer Jeff Lemire and the artist Dean Ormston. “With our development team, one of our big initiatives was to bring in a superhero universe,” said Nick Pepper, the president of Legendary Television Studios. “We were lucky enough that this was available.” Financial details of the deal were not disclosed and timing is not yet set on the debut of the first project.

In Black Hammer, heroes like Golden Gail, a woman in her 50s who feels trapped by her young, superpowered body; Barbalien, a gay Martian; and Colonel Weird, whose explorations have left him on edge, find themselves stranded in a farm community year upon year with little hope of getting home. Each issue reveals more of their plight, their efforts at connection with their fellow residents and the quest by a family member to find them.

The comic is one of several projects by Lemire, a prolific writer and cartoonist, that has been optioned. But “with Black Hammer, it’s not just one book. It’s a whole universe with multiple books — and it will be multiple projects for film and television,” Lemire said. The Black Hammer universe includes the main series and three mini-series, so far, that take staples of the superhero genre (like magic words that grant special abilities) and turn them on their head. 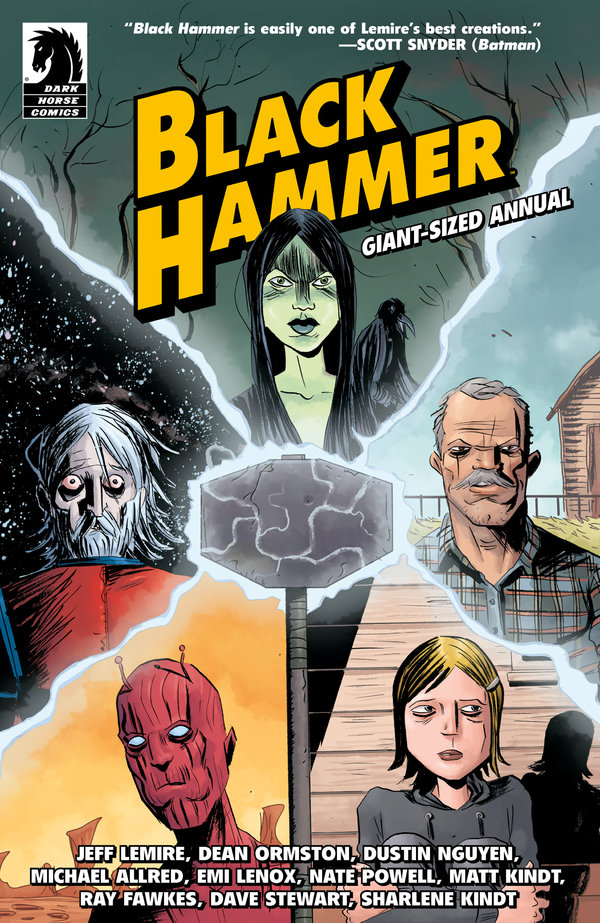 In 2017, Black Hammer received the Eisner — the industry equivalent of an Academy Award — for best new series. It was also nominated for best writer and won a second prize for best lettering. The Los Angeles Review of Books praised the series for its “compelling and emotionally terse world,” singling out the drawings of Ormston and the colors of Dave Stewart that “convey the heavy dread of a banal life simultaneously with the weird and fantastical elements threaded throughout the domestic drama.”

The farm setting is a special place for Lemire, 42, who was born and raised in a rural area in Essex County, Ontario. He began his career with “Essex County Trilogy,” a fictional version of his childhood upbringing. “I never thought in a million years I’d actually be able to write for Marvel or DC Comics,” he said, though he eventually found himself working, usually as a writer, for those companies, which are primarily known for their superhero fare.

“Black Hammer is my love letter to superhero comics as an indie comic,” he said. The series, he said, gives him a chance to explore stories that he might not have been able to do with flagship characters, who are often weighed down by years of storytelling or merchandising concerns.

There is a seemingly endless array of comic book-based fare on screens big and small, with more on the way. One reason comics appeal to producers is the potential to exploit an existing audience, noted Monica Landers, chief executive of StoryFit, which uses data and machine learning to predict content marketability. Another reason “is that there’s just a lot more story in the written development,” she said by email. “This means that producers have choices and can focus on the specific stories that will most resonate in this medium. For television series, this means that producers have a strong platform from which to grow and extend — like we’ve seen in ‘Handmaid’s Tale.’”

Being able to tap the expanding world of the Black Hammer comic books and the ideas Lemire has for the series is part of what attracted Legendary. “The way he mapped out the universe, and all the time periods, for me, it feels like something very special there,” Pepper said.

Lemire will be involved in writing the adaptations, adding to a workload that includes a graphic novel, “Frogcatchers,” to be published by Simon & Schuster next year. “The more projects I have, the more creative I become,” he said. “With Black Hammer, I’m at least a year or two ahead of being published,” which allows him to take breaks, though those often involve other projects, like screenplays or drawing comics. “It doesn’t even feel like work for me,” he said. “It’s what I would be doing anyway. The more I can do, the more I’ll do.”

An earlier version of this article misstated the surname of the chief executive of StoryFit. She is Monica Landers, not Launders.