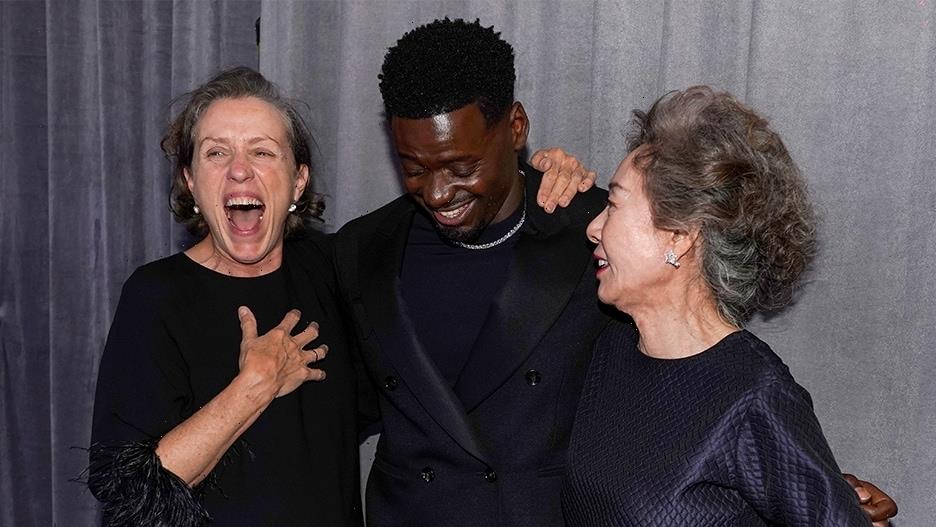 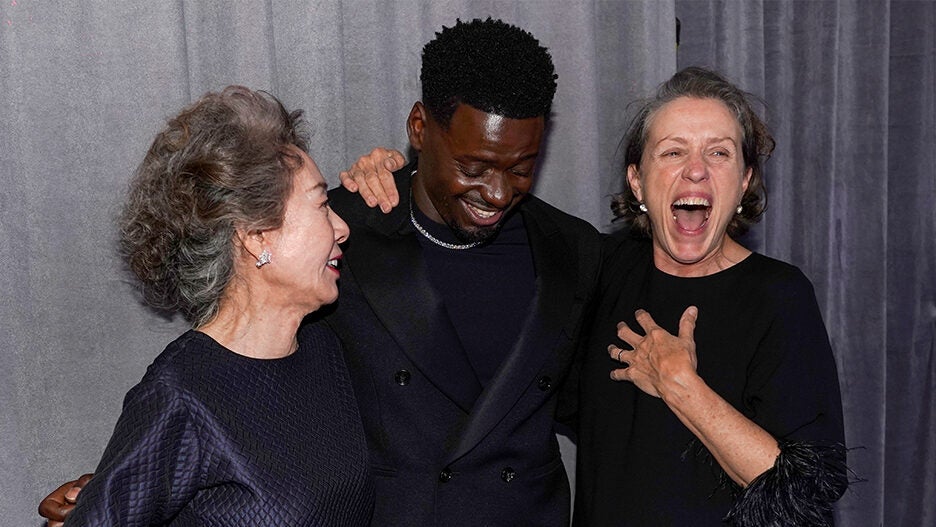 In the strangest of all awards years, what happened on the stage of L.A.’s Union Station on Sunday night was by turns predictable and unusual and quite strange.

Predictable because Chloé Zhao’s “Nomadland” was the big winner; unusual because the late Chadwick Boseman lost to Anthony Hopkins for Best Actor. Predictable because producers Steven Soderbergh, Stacey Sher and Jesse Collins reworked the usual extravaganza into a more intimate, COVID-compliant show with lots of satellite links; unusual because their idea of streamlining the Oscars involved longer introductions and longer speeches, but cut out the usual film clips and almost everything else and still managed to be the shortest Oscar telecast in eight years.

And in a way, there was a surprise element even to the “Nomadland” win. The outcome doesn’t shock anyone after Chloé Zhao’s lyrical road movie won the Golden Globe, Producers Guild, Directors Guild and BAFTA Awards — and the steamroller for the quiet drama had been in the works since September, when the film won the jury prize at the Venice Film Festival and the audience award at the Toronto International Film Festival.

But that, in a way, was the usual thing about the victory — because films that are Oscar favorites in September almost never hang onto their front-runner status for the usual six-month awards season, much less this year’s elongated eight-month marathon.

But this was an awards season in which momentum was hard to come by, because the rooms in which momentum is generated and buzz is bred and nurtured — crowded awards shows, theater lobbies, post-screening receptions — were empty. In a virtual awards season, it was harder for rivals to “Nomadland” to stir up attention, so the film that looked like a default front runner in October seemingly solidified into an unbeatable one by March.

Or did it? That was one of the many weird things about the season — that we never really got a sense of how Academy voters were thinking, apart from scattered and unreliable accounts, or even a sense of how many were voting and whether they were the usual Stateside voters or the increasingly large number of international members.

In the end, “Nomadland” was two things at once: It was a formidable accomplishment from a bold director, which made it the kind of film that has virtually always won Best Director in recent years; and it was an intimate, personal and wonderfully well-performed drama of the kind that often claimed the Best Picture prize. Only three films had won both picture and director in the previous eight years, but “Nomadland” had what it took to join “Parasite,” “The Shape of Water” and “Birdman” in that group. And while it lost in categories where you might have expected it to win — cinematography and adapted screenplay — its popularity gave Frances McDormand the edge over Carey Mulligan, Viola Davis and Andra Day in the most competitive category of the night, Best Actress.

Apart from “Nomadland” and McDormand, who always knows what to say and how to say it, the biggest winners of the night were “The Father,” which took a big screenplay award over “Nomadland” at the beginning of the night and a bigger Best Actor prize, for Anthony Hopkins, at the end of the show, when most people were expecting an emotional win for Boseman.

Netflix, which didn’t win the big prize, still set a high for any streaming service with seven wins. And Thomas Vinterberg, whose deeply personal speech when his film “Another Round” won the Best International Feature Film Award, showed the producers’ wisdom in not restricting winners to the usual 45-second time limit. (Other winners, however, suggested that the limit is sometimes useful.)

As for the Soderberghian Oscar makeover, it was a singular response to a singular situation, but the intimacy of the show didn’t make up for the fact that it’s hard to sell viewers on movies they haven’t seen if you don’t show them what those movies look like. The show, which was supposed to feel like a movie but ended up being very, very talky, eventually showcased its share of flip clips — but they were mostly missing from the first hour, as if the producers figured that viewers had been watching the hours of pre-show and were already up to speed on the movies. 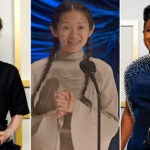 Maybe some of them were, but this was a year in which the general public was probably less invested in and familiar with the nominees than ever — and since everybody already thinks the Oscars are too long, they probably weren’t clamoring to sign on at 10 a.m. to make a day of it.

So this strange year got a strange Oscars, one that gave out awards in other categories after the Best Picture award for the first time since 1972 — when Charlie Chaplin received a special honorary award at the very end of the show.

But does the strangeness tarnish the win for “Nomadland?” Did it win in the absence of competition that it would have faced in a non-pandemic year? Until we see “West Side Story” or “In the Heights” or some of the other major-studio films that were moved out of 2020 because most theaters were closed, it’s impossible to tell what kind of Oscar rivals they would have been. (The trailers we saw on the Oscar show aren’t evidence enough.)

For all the silly griping about this year’s movies being too small and indie and depressing, the kind of movies that were in competition this year aren’t dramatically different, in scale or in tone, from the movies that are usually nominated — and a win for “Nomadland” in just about any year would have been considered an entirely satisfactory outcome.

There’s been talk that this year’s Oscars should come with an asterisk because of how the pandemic transformed the movie business and awards season, but the films that won on Sunday don’t belong in some imaginary movie-business minor league because they couldn’t play in theaters for most of the year. As a diehard fan of the L.A. Dodgers, I refuse to believe that the team’s 2020 World Series championship deserves an asterisk — and neither does “Nomadland” or Anthony Hopkins or anybody else who won Oscars this year.