A Star Is Born is not Shakespeare but it does have the adaptability of a classic. This is its fourth big remake and three of those incarnations have provided a perfect showcase for the diva of the day.

In 1954, it was Judy Garland. In 1976, it was Barbra Streisand, and this time, it confirms Lady Gaga’s acting skills, while also proving that her co-star, Bradley Cooper can direct – although he is a little too fond of the frame-filling close-up.

The plot has elements of All About Eve and My Fair Lady but most of all, it’s the story of a loving marriage and the way it evolves as, over the years, strength flows from one partner to the other. And these changes are magnified because they’re happening in the glare of show business' spotlight.

When Gaga's Ally and Cooper's Jackson Maine first meet, he's a famous rock singer and musician and she's a hotel waitress with a part-time gig singing at a drag bar. He discovers her by accident when he lurches into the bar one night in search of yet another drink and catches her act.

He's immediately won over, they spend the night talking – for a rock musician with a drinking problem, he's remarkably chivalrous – and she confides in him about the reasons for her stalled career. At auditions, her voice impresses but her looks don't because her nose is too big.

At this point, you may experience a desire to start chanting the name, "Streisand!" at the screen but it will probably pass. After all, Garland, too, worried about her nose in the 1954 version. And there are other things to think about because Cooper and Gaga are so convincing as two people enjoying the novel realisation that they have finally come across someone with whom they can have fun. 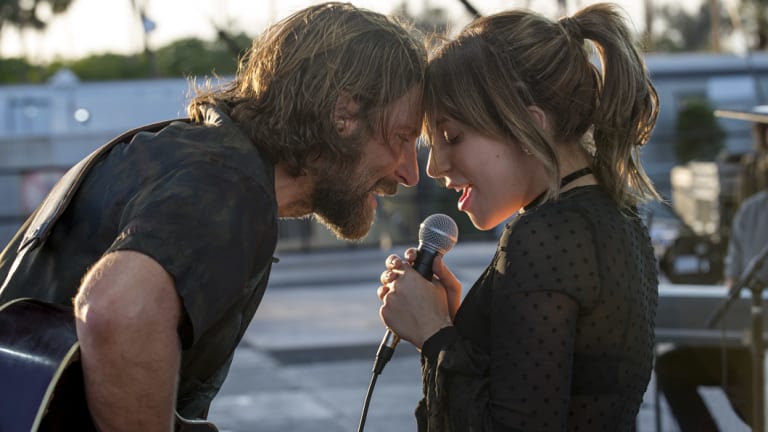 Bradley Cooper and Lady Gaga in A Star Is Born. Credit:AP

Co-written by Cooper, who also helped write some of the film's music, the script doesn’t exactly bubble with wit but it doesn't have to. What matters is that it gives both leads the chance to charm one another – and us.

Gaga's performance is disarmingly unaffected. She's excited but wary, amused but disbelieving even when he's asking her to share the stage with him to sing one of her own songs. By the end of the show, however, they're so in love that she's on the way to becoming a fixture in his life.

But the warning signs are everywhere. Along with his heroic capacity for gin, frequently taken with cocaine, he has the rock musicians' curse – a worsening hearing problem. And Ally is being tempted by a smooth-talking industry type offering her a recording contract.

The next step is inevitable. It's the beginning of her transformation from an ingenue with a powerful voice and her natural hair colour to a glitz and glitter version of Gaga herself.

It's a scenario which cleaves to earlier versions of the film while altering the mood. Cooper softens the anger and self-pity that pumped up Kris Kristofferson’s performance in the 1976 movie, eliminating the kind of tantrums and sulks endemic to the stereotypical suffering artist.

Instead, he's added a strong dash of humility. He still behaves badly and he can get nasty when the gin is doing its worst but his most embarrassing act is not perpetrated out of spite. He's just too drunk to know what he's doing.

Yet he's not a bore. Cooper manages to invest his character with a sweet-natured awareness of his own flaws, together with a persuasive sense of shame.

He and his co-writers have also been wise enough to counter-balance the tough stuff with a supporting cast of comic characters led by Andrew Dice Clay as Ally's starstruck father. And the concert scenes, most of which were filmed at rock festivals before an audience of thousands, are great.

In these circumstances, Cooper's close-ups do work, especially when they're recording Ally's dizzying trip from sheer terror to pure joy when she dares to take on to the stage for the first time.

Next post Another 'Dresden Files' TV Series is in the Works